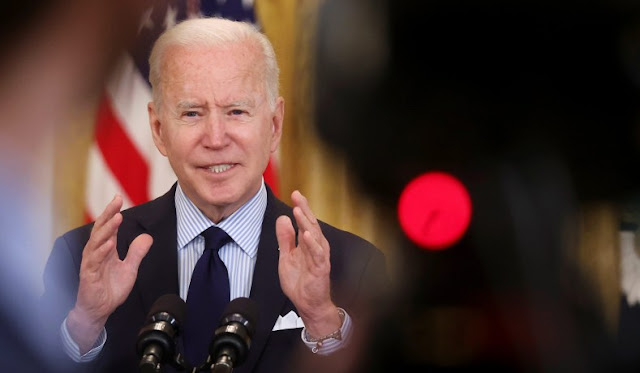 President Joe Biden delivers remarks on the April jobs report from the East Room of the White House, May 7, 2021. (Jonathan Ernst/Reuters)

The lesson of today’s jobs report is that President Biden should be spending less time fantasizing about becoming Franklin Roosevelt, and more time trying to avoid becoming Herbert Hoover.

It all happened so fast. At 8 a.m., CNN was echoing the likes of Warren Buffett, Larry Summers, and Janet Yellen in sounding the alarm about inflation. By 8.30 a.m., it had broken away to report the news that the April jobs report was an unmitigated disaster. The consensus had been that the data would show a million new jobs; the real number was less than a quarter of that. That, Axios noted, represented “the biggest miss, relative to expectations, in the history of the payrolls report.”

A lot of people said they were “shocked.” But why, exactly? Did they believe that Joe Biden had rendered gravity optional? This is what you get when you pay people not to work. It’s what you get when you send check after check after check to people who, were they permitted to, would be perfectly capable of regaining employment. It’s what you get when you allow the teachers’ unions to shut down the schools ad nauseam, and put working parents in a long-term bind. There is nothing magical about 2021, or about Joe Biden, or about this set of legislators and appointees and special interests. The same rules apply to them that applied to their predecessors. You can’t spend what you don’t have. You can’t tax and spend your way to prosperity. And human beings cannot be programmed out of responding to clear incentives. Call your plans whatever you want — Build Back Better, Modern Monetary Theory, Fairness, the Left-Handed Teacup Initiative — it doesn’t matter. Reality doesn’t care about branding.

The pigheadedness is stunning. The Treasury is spending twice what it’s taking in, we have a national debt that has eclipsed annual GDP for the first time since World War II, and, despite the abundance of recovered jobs, we are having a real problem getting people into them. So, of course, the Democratic-led government in Washington has decided to send out a new round of stimulus checks and to extend the subsidies that have encouraged workers to sit at home — a witches’ brew of stupidity that, taken together, amounts to the American people piling on yet more debt for the privilege of stopping an economic recovery.

Some of the governors who live closer to reality — among them Henry McMaster of South Carolina, Greg Gianforte of Montana, and Ron DeSantis of Florida — have begun limiting the damage by reducing the incentives for workers to stay at home. In Montana and South Carolina, unemployment benefits are being cut; in Florida, they are being restricted to those who are actually looking for work. Before long, more will presumably follow. But the states can’t fix this on their own. They are going to need Washington to just stop. It is hard for politicians to grasp, but sometimes the best course of action is to do nothing at all. And, after the flurry of action and profligacy that has marked the last year, it is high time for a salutary pause.

Will we get one? It doesn’t look like it, no. The Democrats have been warned that overextending support could damage the labor market, and they have been warned that pumping trillions of dollars into an expanding economy without reference to need, prudence, or the output gap would risk an inflation spiral, and yet, as the Washington Post reports, the White House seems to believe that today’s jobs report “illustrates the importance of providing robust unemployment support with millions of Americans still out of work” while Nancy Pelosi thinks that “the evidence is clear that the economy demands urgent action.” Unless that “urgent action” involves immediately turning off the taps, canceling both of President Biden’s ridiculous spending packages, and encouraging teachers and everyone else to get the hell back to work, it will represent precisely the wrong course. It may not be as true as it once was that politics is “the economy, stupid,” but voters will still exact their revenge for government-engineered malaise — and, unless they elect to dramatically shift course, that is exactly what the Democratic Party is inviting.