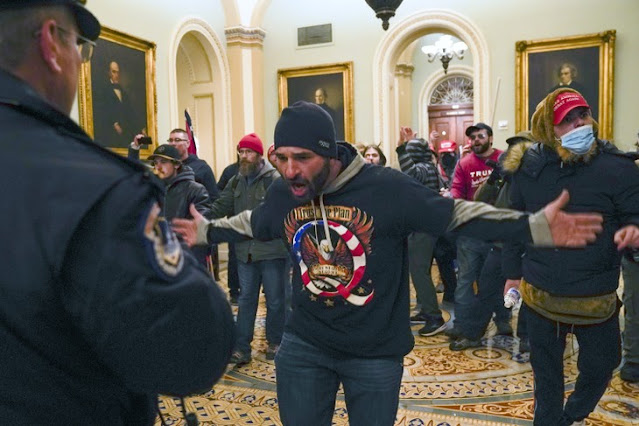 Republicans in the Senate held together to thwart attempts to form a commission to investigate the trespassing and minor property damage that happened at the Capitol on January 6, 2021. We should all refuse to call it an insurrection or even a riot at this point if for no other reason than to frustrate the left—in particular, leading Democrats like this bitter former presidential candidate who keeps lying to her followers:

It is well established that the only person who died that day due to violence at the Capitol was Ashli Babbitt, an unarmed veteran and Trump supporter. The identity of the Capitol Police officer who shot her remains unknown, unlike officers in the past year who have shot suspects to save their own lives or the lives of others. Officer Sicknick’s death was used as a prop by anti-law-enforcement Democrats in the wake of January 6th. His death was incorrectly included in the bogus second impeachment of President Trump.

If leading Democrats are still willing to make this kind of debunked assertion, the goal of their commission is crystal clear. It is to persecute their political enemies and keep President Trump and his supporters front and center as cover for their radical agenda and the repeated failures of the Biden administration. It would also bolster their fever dreams about the right-wing violence the DHS and DOJ keep talking about in the absence of any credible threats. Republicans are absolutely right to deny them the opportunity.

At this point, the biggest regret surrounding January 6 is losing the moral high ground on political violence. After a summer of riots, arson, and looting by the radical left that caused upwards of a billion dollars in damage that will linger in affected communities, there was no comparator on the right. If Democrats have no interest in finding out who funded and led those costly and far more deadly riots, they can just wait for the Justice Department to finish rounding up Trump supporters.

Additionally, Jan. 6th was not the most heinous attack on the Capitol, and Democrat leaders in Congress know that because they are nearly as old as dirt. In 1971 a bombing at the Capitol building by members of the Weather Underground caused almost $2 million in damage in today’s dollars. The leader of that group, Bill Ayers, is now a celebrated figure on the left and moves in elite circles.

In 1983, a bomb tore through the second floor of the Senate wing, causing the modern equivalent of more than $1.5 million. A faction of the May 19th Communist Order claimed responsibility and later set off bombs at Fort McNair and the Washington Navy Yard. Susan Rosenberg was among the members arrested in 1984, and President Bill Clinton commuted her sentence on his last day in office.

Now she is on the board of 1000 Currents, a not-for-profit that loaned its status to Black Lives Matter Inc. for fundraising during last summer’s violence, bringing political violence from the left full circle. Neither of these bombings ever received a congressional investigation. The FBI handled criminal investigations, and the DOJ conducted prosecutions. There is absolutely no reason Congress should handle January 6th any differently.

Hopefully, the move to deny Democrats a commission will also frustrate squishy Republicans who are in desperate need of a wake-up call and deprive them of the platform to continue screaming about the bad orange man. Their Trump Derangement Syndrome is nearly as terminal as Rep. Liz Cheney’s, and they are almost as good at insulting their grassroots voters. Of course, the usual suspects voted with their Democrat colleagues:

The Senate just blocked debate on the bill to establish a Jan. 6 commission to investigate the attack on the U.S. Capitol- 60 yeas were necessary to end the filibuster but the final vote tally was 54-35. #NexstarDC

Eleven senators were absent for the procedural vote. All Democrats present voted yes and six Republicans joined them:

Now the Republicans willing to stand up and oppose a politicized commission need to join Senators Dick Durbin and Elizabeth Warren in demanding that those arrested for January 6 be moved out of solitary confinement. Every single one. Then they need to insist that courts set appropriate bail for those who committed what are essentially property crimes. Some have been in jail for months, and there have been several allegations of abuse by corrections officers. GOP members should begin preparing their exhibits showing the charges dropped against antifa and Black Lives Matter by the DOJ while those arrested related to January 6 sit in jail. It will be a stark comparison.

Republicans also need to demand the return of the personal electronic equipment, and immediate restitution for damage to the home of an Alaska couple falsely identified and detained for questioning in their home for hours. Why the FBI seized their property in the first place is a mystery. Add to that an end to FISA warrants on American citizens not linked to foreigners and warrantless searches of travel, banking, and other records searching for anyone who may have attended President Trump’s speech.

Continuation of a two-tiered justice system based on political ideology will only open the door to political persecution. We see increased antisemitic violence by those who side with the Palestinians in a political conflict. When President Trump resumes rallies, will violence against his supporters be tolerated as it was in 2016? At this point, it’s pretty easy to presume that it will.

A question that needs to be asked: If a person entered the Capitol after this exchange, can you even consider it trespassing? You have to wonder what the other 14,000 hours of withheld video may show.

Stacey Lennox is a recovering Fortune 500 executive and healthcare professional. Busting the COVID-19 narrative under the VIP tab to avoid the censors. PJ Media readers can hear Stacey on the weekly Loftus Party podcast with comedian Michael Loftus and multiple shows a week on KLRN Radio.