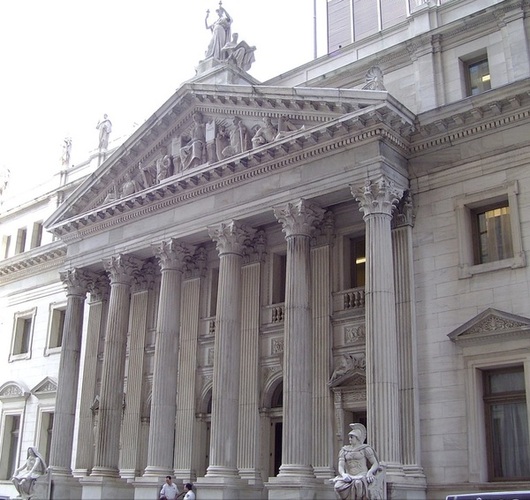 Courthouse of the First Appellate Division. Photo credit: Beyond My Ken CC-BY-SA 4.0 license.

In an opinion replete with Trump Derangement Syndrome, a panel of five justices of the 19-member Appellate Division of the New York State Supreme Court, First Department, have ordered the immediate suspension of Rudolph W. Giuliani from the practice of law, pending a disciplinary hearing where the former mayor of New York City will face disbarment.

The order was handed down on June 24.  It claimed that the former mayor made false statements about various voting irregularities — including phony absentee ballots, and voting by non-citizens and felons, and underage voters and deceased voters, in Pennsylvania, Georgia, and Arizona.

The title of this article carries a serious charge, but consider the following citations from the suspension order in deciding whether the charge — playing politics, actually — is justified or not.

"This country," the opinion proclaims, "is being torn apart by continuing attacks on the legitimacy of the 2020 elections and of our current president, Joseph R. Biden."  Let's pause there.  Where were the five New York State Supreme Court jurists (App. Div., 1st Dep't) the four years from January 20, 2017, to January 20, 2021, when the country was torn apart by "The Resistance," including those Deep State denizens, seeking, without let-up, the overthrow of the legitimately elected president, Donald R. Trump?

Returning to the partisan screed:

And where were these jurists the years of the "false statements" on "colluding with Putin, charges of mental instability, Ukraine-gate, and the like throughout Mr. Trump's years in office, statements clearly designed to cause loss of confidence in his leadership — which indeed did so, given his favorable poll numbers only in the 40s?

And what of the false statements in the anti-Trump press, just disclosed this month, that President Trump ordered the forcible clearing of Lafayette Square, June 1, 2020, so that he could have a photo op at vandalized St. John's Church?  Didn't those statements keep "reliable information" from the American people?

When those false statements are made by an attorney, it also erodes the public's confidence in the integrity of attorneys admitted to our bar and damages the profession's role as a crucial source of reliable information.

And what of "false statements" made about Mr. Trump, from Democrats in Congress who are New York attorneys, like Jerrold Nadler?  Who will bring a grievance against him, alleging his efforts to undermine public confidence in Mr. Trump?

This screed-cum-opinion, then, stripping away all pretense, tears down the wall separating the First Department from the political arena, as will be immediately evident from the following paragraph:

One only has to look at the ongoing present public discord over the 2020 election, which erupted into violence, insurrection and death on January 6, 2021 at the U.S. Capitol, to understand the extent of the damage that can be done when the public is misled by false information about the elections. The AGC [Attorney Grievance Committee] contends that respondent's misconduct directly inflamed tensions that bubbled over into the events of January 6, 2021 in this nation's Capitol. Respondent's response is that no causal nexus can be shown between his conduct and those events. We need not decide any issue of "causal nexus" to understand that the falsehoods themselves cause harm. This event only emphasizes the larger point that the broad dissemination of false statements, casting doubt on the legitimacy of thousands of validly cast votes, is corrosive to the public's trust in our most important democratic institutions.

Is this a mere obiter dictum (an incidental expression of a judge's personal opinion) — or a statement joining forces with The New York Times and the Democrat (and Liz Cheney) demagogues, hurling out the term "insurrection" as a "false statement" description of the events at the Capitol the afternoon of January 6, 2021?  It is about as rank and unseemly a statement as ever emerged from a judge's chambers.  And see how this opinion followed Biden's lead referring, so misleadingly, to "death" at the Capitol, January 6, 2021.  Who died, was killed, at the Capitol, January 6, 2021, other than the unarmed pro-Trump demonstrator Ashli Babbitt?  What confidence does this invidious partisan declaration leave in the minds of at least half the voting population, that justice is blind?

By inserting the insidious words "insurrection" and "death," this First Department panel raised high the Democrat banner above its Manhattan courthouse.  It should be noted that all five justices were appointed by Democrat governors: one by Eliot Spitzer, two by David Paterson, and two by Andrew Cuomo.  The presiding judge, Rolando Acosta, once a Legal Aid Society lawyer, is a member of Columbia University's Athlete Hall of Fame for pitching prowess with the university's baseball team.  Alas, with the Giuliani suspension, Judge Acosta has thrown a wild pitch.

And behold — the attorney grievance committee accuses Rudy Giuliani of "misconduct [that] directly inflamed tensions that bubbled over into the events of January 6, 20201in this nation's Capitol."  Did the First Department panel respond with the words such an accusation deserves: "that's ridiculous"?  Not at all.  The panel instead acted as if on cue — dismissing "causal nexus" as irrelevant, effectively holding that the alleged falsehoods present all the justification necessary to end Giuliani's career as an attorney.

Once, members of the Judicial Branch were careful to stay clear of the "political thicket."  Let's change that metaphor to "briar patch."  Why?  Because, like Br'er Rabbit, the five members of the First Department panel in "The Matter of Rudolph W Giuliani, an Attorney," have rushed into their political "briar patch," where, undoubtedly, they feel sure that they have taken a significant step in addressing "the toxic effect of Trumpism," as The New York Times called for, in an August 2016 editorial.

This panel, in the manner of most leftists, is likely too self-confident to allow that we "deplorables" are on to them.  We know when their comments are projections of their own mindset.  At least half the voting population will recognize that false judicial screeds, pretending to be opinions, are, quite simply, "corrosive to the public's trust" — in the Judicial Branch of government.