Biden throws his clueless vice president under the bus 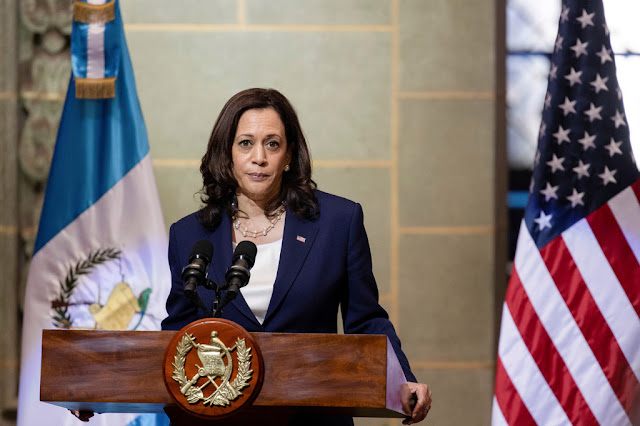 Vice President Kamala Harris telling Guatemalan migrants “Do not come, do not come” to the US on June 7, 2021.REUTERS

Kamala Harris is playing a historic role in 2021: the nation’s first black, Asian, female vice president to serve as a sacrificial lamb.

Like many other women before her, Harris has been tasked with coming in late to clean up a mess made by her boss. Joe Biden probably wouldn’t do too well in a “Jeopardy!” contest, or even on a circle-a-word puzzle, but he’s smart enough to know that when you’ve got a problem you can’t solve, you should grandly announce a plan to deal with it by … fobbing it off on someone else.

Alas, unlike Barack Obama’s plan to cure cancer by announcing that Joe Biden would cure cancer (yes, that really happened), Biden’s buck-passing set up Harris for a spectacularly visible failure.

When friendly questioner Lester Holt pointed out to Harris that she hadn’t visited the border once, she pulled her trademark move (whenever she gets busted) of breaking into that famously weird dismissive laugh and replied, “And I haven’t been to Europe,” as though an equivalent problem is coming out of Europe. Hordes of damp Irishmen desperately washing up on the shores of Maine, perhaps.

The Biden administration created the border crisis with a “Yay, illegal immigrants” rhetorical style that was received in Latin America like an embossed invitation: “President Joe cordially invites you to El Norte.”

During the presidential campaign, Biden generously offered to suspend deportations and end family separations. In 2019, both Biden and Harris vowed to give health care to illegal immigrants, and two years before that, she insisted that “an undocumented immigrant is not a criminal.”

Biden was so intent on reversing everything President Donald Trump did that he moronically reversed one of Trump’s biggest successes: the “Remain in Mexico” program that required asylum-seekers to stay south of the border while their claims were being heard. Unsurprisingly, there was a record-setting run on the border, and suddenly there was a serious human cost to all of the knee-jerk anti-Trumpism.

Enlarge ImageWhen Biden announced he was appointing the veep as his immigration czar, he was effectively passing her a grenade whose pin he had already pulled. When Harris went to Guatemala, that country’s president flat-out blamed Biden’s policies for the surge north. He said the United States’ “message changed to, ‘We are going to reunite families and we are going to reunite children’ … The very next day the coyotes here were organizing groups of children to take them to the United States.”

Trying to project authority and get a handle on the crisis, Harris was as convincing as Kevin Bacon at the end of “Animal House,” screaming, “Remain calm! All is well!” as the crowd stampedes over him.

“Do not come,” Harris said in Guatemala, addressing potential illegal immigrants thinking about entering the US. “We will discourage illegal migration. The United States will continue to enforce our laws and secure our border. … If you come to our border, you will be turned back.”

That’s not what Central Americans are hearing from their friends who are now comfortably ensconced in the US. Nearly half of those who show up at the border seeking asylum are being welcomed into the States, given orders to appear in court, and then set free. Biden and Harris haven’t just placed a Welcome mat on the border, they’ve announced to the world that we’re suckers.

Harris can’t clean up the mess at the border unless her boss decides to clean up his policy mess — by reinstating some of Trump’s ideas. That’ll probably never happen, but in the meantime, Biden can deflect all questions to his clueless vice president.