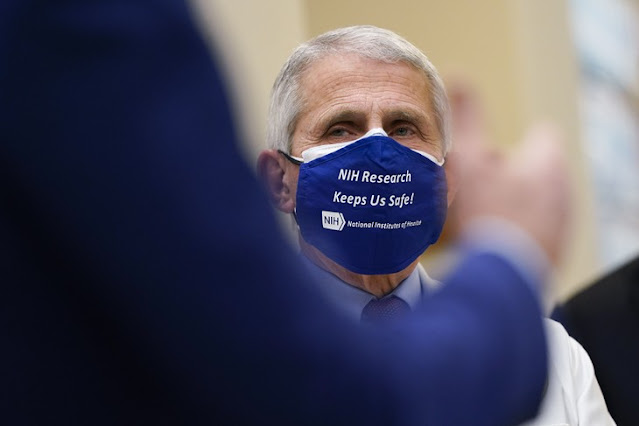 Dr. Anthony Fauci is getting roasted all over social media after the Washington Post and BuzzFeed released scores of his emails, obtained through FOIA requests. The ones that aren’t heavily redacted tell quite a story. It should come as no surprise to readers of PJ Media that Dr. Fauci didn’t believe the line of crap he sold us about wearing “the typical mask you buy in the drugstore” to protect us from the virus—at least he didn’t in Feb. 2020.

“Masks are really for infected people to protect them from spreading infection to people who are not infected rather than protecting uninfected people from acquiring infection,” Fauci wrote in an email to Sylvia Burwell, presumably President Barack Obama’s former HHS secretary. “The typical mask you buy in the drug store is not really effective in keeping out virus, which is small enough to pass through the material.”

Recall that in March 2020 Fauci was telling people to stop buying masks. We later learned that he made the recommendation because he was “concerned that it was at a time when personal protective equipment, including the N95 masks and the surgical masks, were in very short supply.”

We’ve been telling you for a year that it’s written on the boxes that drug-store masks are not sufficient to protect from viruses. Dr. Fauci knew it then and he knows it now. Yet, STILL, our children are forced into these things and made to wear them all day in order to participate in school. He should be arrested and charged with the mass child abuse of America’s children.

Somehow, advice for sick people to wear masks to avoid infecting others morphed into “even healthy people have to wear masks,” including people who are vaccinated, even after “asymptomatic spread” panic never panned out. The level of convoluted nonsense here is off the scale.

PJ Media has written extensively about how Facebook decimated our traffic and hurt our business over false fact-checks for raising questions about the response to the virus. When our sister sites Townhall and RedState reported that some scientists were questioning whether COVID-19 was engineered or leaked from a lab, they got choked by the Big-Tech bullies and told that we were spreading “fake news.”

An email Fauci received in Feb. 2020, obtained by BuzzFeed, says that the COVID-19 virus showed signs of “potentially” being engineered. Kristian Anderson, professor of immunology and microbiology at Scripps Research, emailed Fauci saying, “The unusual features of the virus make up a really small part of the genome (<0.1%) so one has to look really closely at all the sequences to see that some of the features (potentially) look engineered.”

Why was this point of view silenced? Who knows if that’s true or not? Anderson’s email coincides with and echos a report suggesting the possibility of an engineered virus, which was pulled a few days later for factual errors.

To be clear: I strongly object to media outlets being silenced and censored for reporting what one or more scientists think they’ve found. Whatever it is, the public should hear it. If it is withdrawn later, as was a report that made some scientists believe that COVID-19 might be engineered, then the press should report that. Scientific integrity is preserved and the public is treated to a real-time look at how science is never settled and is always changing and advancing or being clarified. Most importantly, the public is treated like adults and not small children who are incapable of understanding science and evolving studies.

Why are we being controlled like Chinese press outlets? It doesn’t even matter if the virus was engineered or not. The fact that one or more scientists have reason to believe it might be (even if they change their minds at a later date) is newsworthy. It is not okay for the Big-Tech powers that be to shut down any story they want and punish and silence media for trying to tell it.

Back in February of 2020, anyone who reported that the virus might be engineered or may have come from the Wuhan lab was censored and defamed. In May of last year, Fauci declared: “If you look at the evolution of the virus in bats and what’s out there now, [the scientific evidence] is very, very strongly leaning toward this could not have been artificially or deliberately manipulated … Everything about the stepwise evolution over time strongly indicates that [this virus] evolved in nature and then jumped species.” Facebook censored any news outlet reporting that the virus may have escaped from a Chinese facility. Recently, the establishment has admitted that the virus could have leaked from the Wuhan lab, after dismissing that theory as a cooked-up “racist” Trump provocation for the better part of a year. How dare they?

It’s true that our knowledge of the virus changed over the months, but I don’t think there is any excuse for Fauci making half of America believe that a cloth mask is some kind of magic solution against a virus he knew to be far smaller than the holes in the masks. Nor is it appropriate to have hidden ongoing studies and findings about the virus from the public. It’s negligent and dishonest. This is the kind of thing that dictatorships do. I am looking forward to Rand Paul’s next session with Dr. Fauci at a Senate hearing.

Megan Fox is an award-winning journalist, broadcaster, and author of Believe Evidence; the death of due process from Salome to #MeToo. and Shut Up! The Bizarre War that One Public Library Waged Against the First Amendment.