By Jack Davis  | The Western Journal 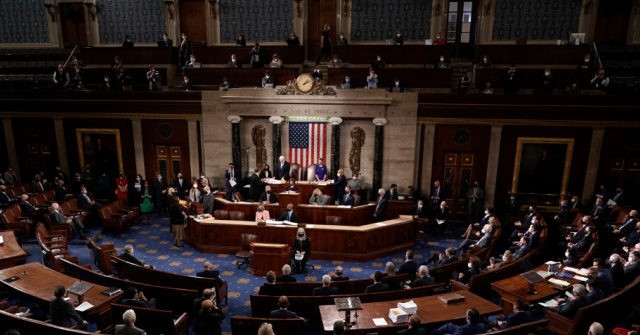 Senate Republicans sent Democrats’ attempt to rewrite the rules of the nation’s elections to the dusty halls of procedural limbo Tuesday.

Senate Democrats hoping to open debate on the so-called For the People Act needed 60 votes to overcome the GOP’s use of the filibuster.

Instead, they fell 10 short with the evenly divided chamber going 50-50 on the debate.

Vice President Kamala Harris, who shows up to preside when her tie-breaking vote can help Democrats ram through legislation, was in attendance but could do nothing to stop the bill’s defeat.

Senate Majority Leader Chuck Schumer of New York, who in the course of the day’s flow of vitriol called former President Donald Trump “a petulant child,” said that defying the Democrats was “a partisan blockade of a pressing issue here in the United States Senate. An issue no less fundamental than the right to vote,” according to an official transcript.

“Because of one man’s lie, Republicans are now doing the dastardly act of taking away voting from millions of Americans … making it much harder for them to vote, and many, many, many will not,” Schumer said, referring to Trump’s allegations that the November presidential election was stolen from him.

However, Senate Republicans made it clear that their opposition to the bill was not rooted in their defense of Trump but in revulsion to the stench of the bill.

“Speaker [Nancy] Pelosi and Senator Schumer call it, I think, the ‘For The People Act,’ but I think it would be more aptly described as the Screw the People Act. It will make it much easier to cheat in an election,” he said.

Kennedy said the proposal “almost guarantees that we’ll never have another Election Day. We’ll have election months. And I think that was the genesis of a lot of concern by many people in the last election.”

The power grab nature of the proposal also revolted Republicans, he said.

The Democratic Party’s plan “achieves its purpose by taking elections, which are governed by the people through their state legislatures right now, and gives that authority to the federal government,” he said.

“Now, why anybody would take something that’s working and give it to the federal government is beyond me. The federal bureaucracy can’t even stop scam calls or spam calls. But nonetheless, if you turn our voting procedure over to the federal government, I guarantee you the first thing they are going to do is get rid of voter ID. And I think most Americans believe that you should have to prove who you say you are when you go to vote,” Kennedy said.

Senate Minority Leader Mitch McConnell of Kentucky has said that bill contained a “rotten core: an assault on the fundamental idea that states, not the federal government, should decide how to run their own elections.”

In his Tuesday floor remarks before the vote, McConnell lambasted “Democrats’ transparently partisan plan to tilt every election in America permanently in their favor. By now, the rotten inner workings of this power grab have been thoroughly exposed to the light.”

“It’s a recipe for undermining confidence in our elections. For remaking our entire system of government to suit the preferences of one far end of the political spectrum,” he said.

McConnell closed by chiding Democrats that using a partisan power grab as a vehicle to change the Senate rules by eliminating the filibuster would be a mistake.

“And by the way, no matter what far-left activists are telling our colleagues, this most sensitive subject would not be the best place to trash the Senate’s rules to ram something through,” the minority leader said. “In fact, these issues would be the worst possible place to push through a power grab at any cost.

“The Senate is no obstacle to voting laws done the right way. I’ve helped write legislation regarding our democracy that has soared through this chamber on huge bipartisan margins. The Senate is only an obstacle when the policy is flawed and the process is rotten.”

Jack Davis is a freelance writer who joined The Western Journal in July 2015 and chronicled the campaign that saw President Donald Trump elected. Since then, he has written extensively for The Western Journal on the Trump administration as well as foreign policy and military issues.