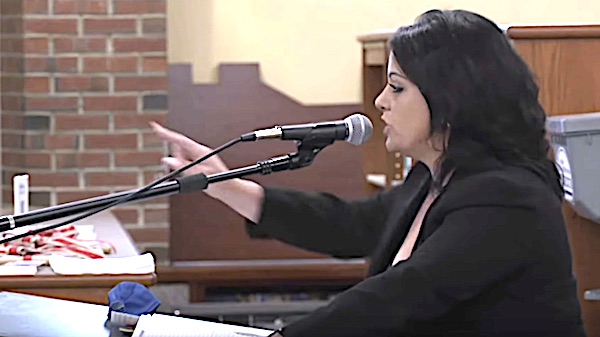 'You're silencing the children. Where are their rights? They have no rights'

A parent criticized members of the Carmel Central School District school board for “emotionally abusing” the children and teaching them “communist values” in Putnam County New York, at a school board business meeting Thursday.

School board members were mostly silent as Ibrahim spoke, though they said they would be willing to meet with her and the superintendent in another setting to address the issues she brought up.

Ibrahim specifically called out two teachers for posting about their political beliefs online before school board members told her she was not allowed to reference people by name, video shows. Ibrahim claimed the teachers in question called “for the death of a former president” and said students who don’t support Black Lives Matter should be “cancelled out.”

“Why are we not allowed to say names? Why am I not allowed when they purposefully expose themselves on social media, talking about calling for the death of a former president, or saying that any child who doesn’t believe in Black Lives Matter should be canceled out. Is this what my tax dollars are paying for?” Ibrahim asked the school board, video shows.

The Carmel Central School District held the meeting in an attempt to garner community support for their proposed budget of $133,581,366 for the 2021 – 2022 school year, according to 77 WABC. The budget failed to pass by 170 votes last month.

Ibrahim said she emailed the superintendent about the curriculum and he informed her that he was unaware of the issues, according to a video of the meeting. She added that she will not vote to approve the school’s budget, saying that the officials are “liars, thieves and have committed treason against the children.”

“You’re emotionally abusing our children and mentally abusing them,” Ibrahim said. “You’re demoralizing them by teaching them communist values, this is still America, ma’am.”

Officials within the Carmel Central School District did not respond to the Daily Caller News Foundation’s request for comment.