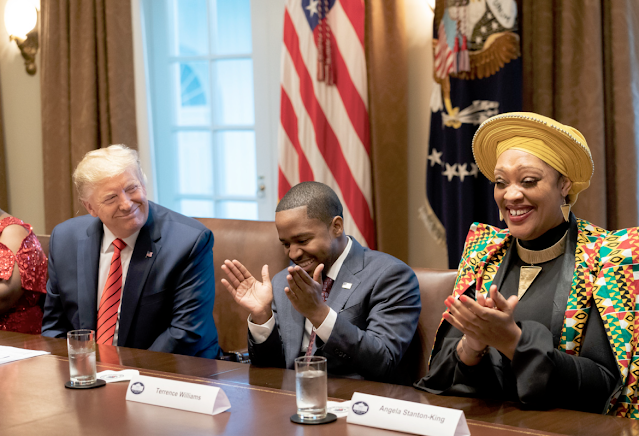 For most of former President Donald Trump’s term, unemployment for all demographics fell to a point where, pre-pandemic, the rate was so low that many economists estimated that the U.S. was at full employment.

But what Trump managed to accomplish that none of his most recent predecessors managed was to lower the employment rates for black and Hispanic Americans to historic levels, which he touted often in speeches and on the 2020 campaign trail.

Fast-forward to the present day: Despite the vast majority of the country having shed pandemic restrictions which created millions of job openings, unemployment for blacks has shot up again under President Joe Biden, a phenomenon which is undermining his pledge to leave no Americans behind, "Just The News" reported Monday [and just like Biden left Americans behind enemy lines in Afghanistan].

“The rise in black unemployment in August is certainly troubling, considering their unemployment rates were already much higher than any other group,” Elise Gould, a senior economist at the Economic Policy Institute, noted on Twitter.

One economist who served as an adviser to Trump, Stephen Moore, said that economic and employment trend lines for blacks under Biden are ominous, especially given all of the congressionally approved COVID-19 relief that was doled out.

“It doesn’t matter how much free money Biden passes out to people. There can be no black economic progress in households with no one working,” he said.

The analysis noted that much of the media’s focus on the August jobs report showing much smaller gains than projected, but for Biden, the more impactful data is likely to be the declining employment figures for blacks, especially if that is allowed to continue.

“Black workers are often first to be fired and last to be rehired, so if the recovery slows we might expect to see that the impact is more on black workers,” Daniel Zhao, a senior economist with Glassdoor, told Reuters Friday.

“That figure on its own creates tough optics for the Fed as it approaches a consequential meeting this month, especially as other data from the Labor Department suggest the Black employment recovery from last year’s recession continues to progress – by some measures more so than for whites,” the newswire service noted.

While Reuters noted that blacks had made some decent gains lately, the situation was far less than ideal.

In October 2019, near the pinnacle of the Trump economy, CNBC reported that black and Hispanic unemployment levels were at record lows.

“The jobless rate for Hispanics hit a record low of 3.9% in September, while African Americans maintained its lowest rate ever, 5.5%,” the network reported, adding: “There have never been more Black and Hispanic Americans in the workforce.”