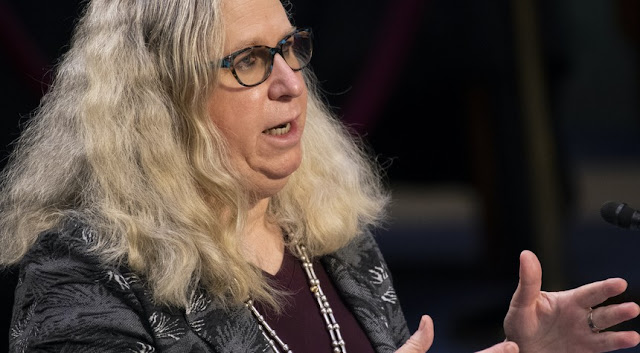 Photo by: Caroline Brehman/Pool via AP

The official Twitter account of Congressman Jim Banks (R-Ind.) was suspended for tweeting, “The title of first female four-star officer gets taken by a man” in reference to Rachel Levine, Biden’s assistant secretary for Health & Human Services (HHS), being sworn in as a four-star admiral of the U.S. Public Health Service Commissioned Corps earlier this week.

When Biden promoted Levine, the administration called him the “first-ever female four-star admiral,” effectively robbing a real woman from ever holding that title.

“My tweet was a statement of fact. Big Tech doesn’t have to agree with me, but they shouldn’t cancel me,” Banks said in a statement posted to Instagram. “If they silence me, they will silence you. We can’t allow Big Tech to prevent us from telling the truth.”

Twitter similarly suspended me earlier this week for pointing out the same biological fact as Congressman Banks.

Banks, the chairman of the Republican Study Committee (RSC), also called on Republicans to “restore honesty to our public forums and hold Big Tech accountable” if they win back control of Congress next year.

“A dude who lived the first 50 years of his life as a man isn’t the first female anything. China is laughing at us,” Greene tweeted.