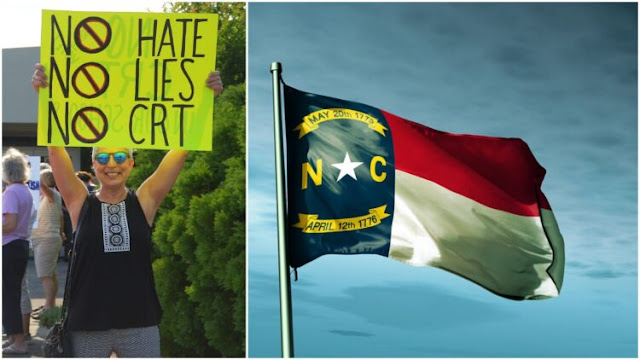 A North Carolina school district in Johnston County has passed a measure punishing school teachers who indoctrinate their pupils to hate America through marxist pseudo-historical curricula like critical race theory.

The Johnston County Board of Commissioners is threatening to deny $7.9 million to educators who refuse to affirm American values. The new policy states that “the United States foundational documents shall not be undermined,” and “all people who contributed to American Society will be recognized and presented as reformists, innovators and heroes to our culture.”

The policy adds that “no student or staff member shall be subjected to the notion that racism is a permanent component of American life.”

April Lee, who serves as president of the Johnston County Association of Educators, said in response to the new policy that we are “selling our souls to the devil for $7.9 million.”

Big League Politics has reported on the movement against critical race theory and other marxist indoctrination measures in public schools, which has far-left commissars demanding for concerned parents to be classified as a terror threat:

“The National School Boards Association is calling for the Biden administration to classify concerned parents as terrorist threats due to a growing backlash against critical race theory, mask mandates, and other abusive practices pushed by public school commissars on children.

“As these acts of malice, violence, and threats against public school officials have increased, the classification of these heinous actions could be the equivalent to a form of domestic terrorism and hate crimes,” the letter states.

Now that they are under the microscope, the marxist abusers in public schools are only doubling down on the reprehensible behavior that made them so despised in the first place. It is time for the American people to rise up and double down on their opposition to these left-wing subversives.”

The public is waking up that their schools have been subverted by a hostile fifth column at war with their values. Critical race theory is divisive poison that cannot be tolerated by a free society.