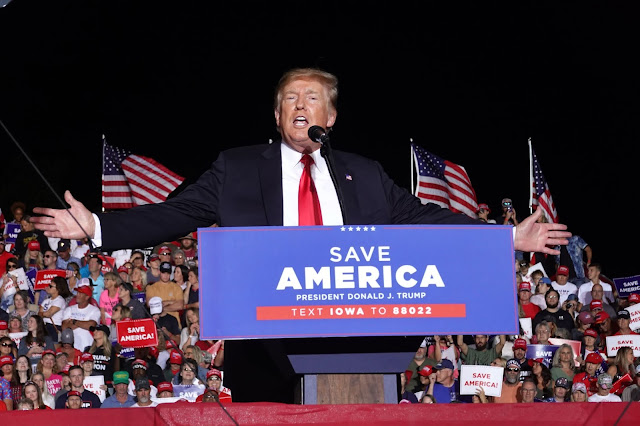 President Donald Trump speaks to supporters during a rally at the Iowa State Fairgrounds on October 09, 2021 in Des Moines, Iowa. This is Trump’s first rally in Iowa since the 2020 election. (Photo by Scott Olson/Getty Images)

President Donald Trump returned to Des Moines, Iowa to kick off his latest “Save America” rally. On Saturday, the 45th president highly criticized Joe Biden and his administration for mishandling a long list of issues the country has been facing for the past nine months under Democrat leadership.

Pointing out how Biden fumbled the bag with multiple issues such as the coronavirus pandemic, the Afghanistan withdrawal and the border crisis, Trump made his own list of campaign-styled promises while telling his supporters “we’re going to take America back.”

When addressing the multi-trillion dollar spending bill the left has continued to push, the president warned his supporters about the potential dangers the future of the country would face if the bill was passed. Trump also noted not only would this be the largest spending bill of all time, but also the largest tax haul to “end America as we know it.”

Trump encouraged all his supporters and Republicans to stay strong and fight against the bill to protect the future of the U.S. in order to bring the country back to greatness. Although he has not officially announced his run in 2024, the 45th president said he had big plans in efforts of “making America great again, again.”

Trump’s plans include his promises to end illegal immigration, make sure election fraud doesn’t happen again and to build back a strong force against foreign threats such as China. Trump said in order to achieve these goals, the right needs to take back control of Congress and fix what the Biden administration has been unable to repair.

Quotes from President Trump at the Iowa Rally: