The Farce of American Despotism 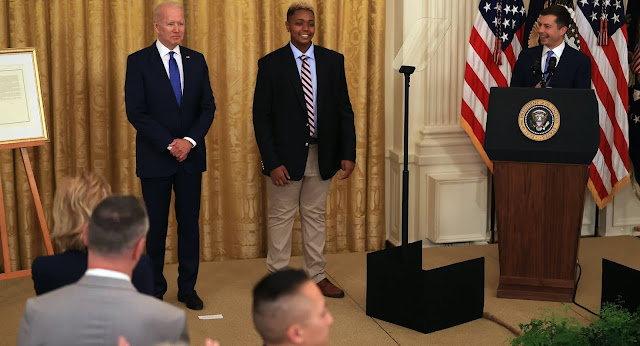 The Soviets had the gulag, we have “cancel culture” in our universities and a brittle obsession with race and weirdo sexuality everywhere.

Reflecting on Joe Biden’s disastrous “town hall” with Anderson Cooper on Thursday, The Spectator’s Dominic Green asks a question that has to weigh heavily on the mind of every American adult: “Is it more worrisome that Joe Biden might not be in charge, or that he actually is in charge?” I have long argued that allowing Biden to appear in public is a form of elder abuse, and I have speculated that he really is not in control of his actions but is manipulated, puppet-like, by a shadowy cadre of unnamed string-pullers I have called “The Committee.”

I do not have any proof that such is the case. I infer the existence and machinations of The Committee from Biden’s ostentatious incompetence and apparent senility. Has any president in the history of the Republic overseen such a destructive litany of failures so early in his tenure? Observers around the world caught their breath in August as our botched exit from Afghanistan went from appalling to something much worse and more deadly. What will be its defining image? The desperate Afghans clinging to and then falling from the landing gear of a transport plane as it took off from the Kabul airport? Or will it be the images of the slaughter perpetrated by a suicide (that is, a homicide) bomber outside the airport, an incident that killed some 170 people include more than a dozen U.S. military personnel?

Or maybe it will be the image of the drone strike launched in retaliation for that slaughter, a strike that was supposed to have targeted an ISIS-K operative but in fact killed zero terrorists and instead blew to bits 10 Afghan civilians, including seven children. The United States initially said they had obliterated an ISIS-K operative along with the collateral damage, but eventually they had to admit that, nope, they got no bad guys, just 10 innocent Afghans.

General Mark “White Rage” Milley, chairman of the Joint Chiefs of Staff, initially called the attack a “righteous strike,” but then walked that back to describe it as a “heart-wrenching” “horrible tragedy of war.” Meanwhile, Joe Biden himself called the evacuation from Afghanistan an “extraordinary success.”

I wonder what the hundreds of Americans stranded in Afghanistan think about that? The administration initially said that everyone who wanted to get out could get out, then it acknowledged that a handful of Americans were left behind, then “about a hundred.” That number has just been adjusted up to more than 400. I wonder, too, what the families of those murdered by the Taliban, and then hanged from construction cranes as “examples” to the populace, think of that judgment? Something similar, I suspect, to what the husband and children of Negar Masoomi, the pregnant policewoman who allegedly was murdered in front of them by Taliban agents in September, think.

But whether Joe is calling the shots or is merely the Howdy Doody mannequin manipulated by others, it is clear for all to see that the United States, as Green puts it, is “heading nowhere good.” And the volume keeps getting turned up on the awfulness.

Everyone has minuted the disaster at our southern border, where thousands upon thousands of illegal aliens are pouring into the country, only to be packed off and resettled in a town near you. It was horrible a couple of months ago. Now it is a screaming catastrophe, as another huge caravan of migrants is wending its way through Mexico towards America. Just so, inflation had spiked over the summer, but now it is out of control, the worst in decades, a situation compounded by a crippled supply chain as hundreds of cargo ships loiter off the coasts of California and New York, unable to make port or be unloaded.

Meanwhile Pete Buttigieg, Biden’s transportation secretary is off on paternity leave with his hubby and their adopted child. Santa is predicted to be leaving the North Pole a little light this holiday season, since many of the gifts people ordered will be delayed. And it’s a good thing his sleigh is powered by reindeer, since gas is going to be awfully dear by Christmas. At some spots in California, it is already north of $8 a gallon.

Last week,  the world, including our so-called “intelligence” services was surprised the the news that the Chinese had recently  tested a nuclear capable hypersonic rocket. The news of that broke right around the time that the State Department issued a tweet proudly announcing “International Pronouns Day.” “Today on International Pronouns Day,” it read, “we share why many people list pronouns on their email and social media profiles.”

Noting that until recently, the United States set “the global standard in political imagery,” Green argues that that day has passed. “The US no longer defines that global standard,” he writes.

The Chinese are the masters of political performance these days, whether it’s allegorical nationalist ballets at sporting events or the other nationalist ballet, the synchronized ovation in the Great Hall of the People. Yet our politicians feel they have to keep up with the old American standard. The result, as it was for the Soviets, is farce. We are now beating ourselves at our own game.

Indeed. And one result of that farce is that the mummers’ play of political correctness increasingly substitutes for serious politics, even as the ideology of wokeness replaces genuine enlightenment. “Twenty-first century America,” Green rightly comments, “is a shadow of its former self, so its politics have become a shadow play of propaganda.”

Marx famously adapted Hegel’s observations about history repeating itself, noting Hegel forgot to add that it does so first as tragedy, then as farce. That is the mode of American despotism at the moment. The Soviets had the gulag, we have “cancel culture” in our universities and a brittle obsession with race and weirdo sexuality everywhere. Are we supposed to be proud or alarmed that Rachel Levine, (né Richard) is the first “transgender” Assistant Secretary of Health and four-star admiral? Tocqueville saw the essentials of our peculiar servitude in his brilliant analysis of “democratic despotism.” Naturally, though, he missed some of the more farcical aspects for who, in 1830, could have predicted “International Pronouns Day” or phenomena like Rachel Levine?

Montesquieu put his finger on our situation when, in Considerations of the Causes of the Greatness of the Romans and Their Decline, he noted that “in a free state in which sovereignty has just been usurped, whatever can establish the unlimited authority of one man is called good order, and whatever can maintain the honest liberty of the subjects is called commotion, dissension, or bad government.” Montesquieu was talking about the moment when the Roman republic gave way to the autocracy of Augustus. Mutatis mutandis, what he says applies equally to our situation in which sovereignty has been usurped and concentrated in the hand of a tiny oligarchy that mouths clichés about “our democracy” the better to subvert it.