By Grant Atkinson | The Western Journal 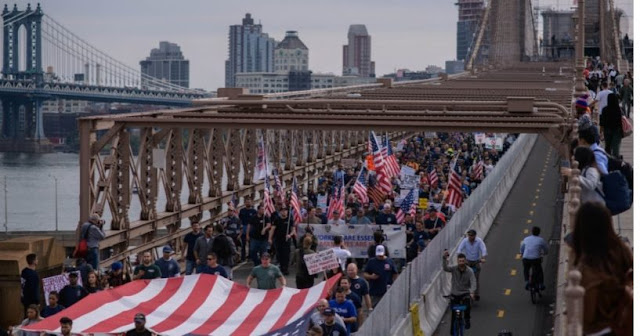 In New York City, Mayor Bill de Blasio has announced all city employees who want to keep their jobs must get their first COVID-19 vaccine dose by the end of the week. Thousands of the city’s employees did not take too kindly to that news, and they made their displeasure known Monday.

Approximately 5,000 protesters marched across the historic Brooklyn Bridge to protest the vaccine mandate, the New York Post reported. Many of them were unvaccinated NYC employees, including police officers and firefighters.

“Now, [after] working after countless of emergencies — Hurricane Sandy, the snowstorms … I am under threat,” FDNY firefighter Sofia Medina said. “We are under threat of losing our livelihood for simply retaining the choice of protecting our bodies.”

“Why now are we being bribed and coerced to take a medication. … We are not now nor have ever been a public health threat.”

Protesters carried signs that read, “Recognize Natural Immunity,” “Do Not Comply” and countless other sayings. Many of the protesters chanted, “Hold the Line!” as they marched.

In a tweet at 11:49 a.m. eastern, the NYPD 84th Precinct said they had shut down vehicle traffic into Manhattan on the Brooklyn Bridge because of the protest.

Nearly 3 hours later, they announced via tweet that all lanes had been re-opened.

While shutting down traffic may or may not be the best way to make your voice heard, these employees certainly had a valid point. Governments at the city, state and federal levels have no right to mandate vaccines for their constituents.

Vaccines should be a personal choice, not one that is forced. To make matters worse, many of the people losing their jobs over this mandate are public servants who put their lives on the line to protect others.

One protester named Paul Schweit, who was proudly wearing a FDNY shirt, pointed out the hypocrisy of de Blasio’s rhetoric, the Post reported.

“Mayor de Blasio wants to paint us as immoral, unsafe, and a danger to the public,” Schweit said. “To the citizens of the city, we want to continue protecting you.”

Monday’s protest follows a smaller one on Sunday, when protesters made their way to the Barclays Center. They were speaking out against the vaccine mandate barring star Brooklyn Nets point guard Kyrie Irving from playing because of his vaccination status.

The Post said any municipal employee who does not get their first dose by 5 p.m. this Friday will be put on unpaid leave. If the number of protesters is any indication, New York City could lose a large chunk of employees under that plan.

In a city where crime is already rampant, the last thing citizens need is for the mayor to reduce the presence of first responders. If de Blasio really wanted to protect his citizens, he would realize that simple fact.