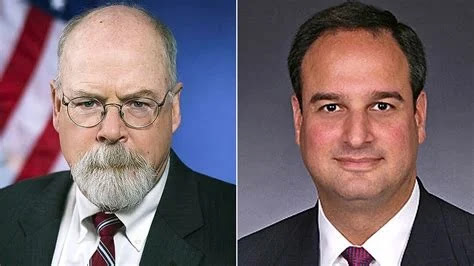 The DOJ’s John Durham dropped another bombshell yesterday in the Michael Sussmann case.

We knew that Hillary was behind the fake Russia-collusion story.  Last week her Campaign Manager, Robby Mook, said under oath that Hillary gave the approval to push the Alfa Bank story that they all knew was garbage.

Yesterday it was reported in the courtroom by John Durham’s team that the FBI knowingly passed along the faulty information from the Hillary campaign to fellow workers claiming it was from the DOJ while hiding the fact that it came from the Hillary gang.

Sussmann is charged with lying to the FBI, something he allegedly did when he hid who he was working for while sharing the now-debunked Alfa-Bank story. That disinformation campaign, which was meant to falsely assert Donald Trump was colluding with the Russians during the 2016 election, has now been directly tied to Hillary Clinton during the trial after it was revealed that she approved its dissemination.

But apparently, Sussmann and Hillary Clinton by proxy weren’t the only ones lying. According to documents presented by Durham, the FBI lied about the Alfa Bank smear’s provenance, telling agents it had come from the DOJ. In reality, Sussmann had brought it directly to the FBI, with the leadership being aware of its origins as badly done political opposition research.

To pull back the layers here, it appears the FBI purposely misrepresented the situation by using a false DOJ referral to make it seem as if the Alfa Bank had come from an anonymous third party. In reality, it came from Hillary Clinton, and the FBI was well aware of who had told them the information and his connections to her campaign.

Another day – another lie from the FBI or the Hillary campaign uncovered.