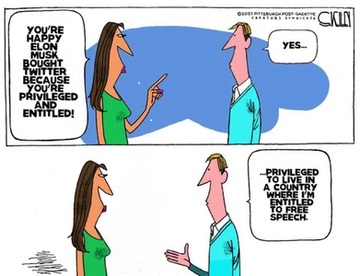 When social media platforms started censoring the political speech of conservatives, the Democrats claimed that they were not influencing these companies on what speech to censor. They made compelling free-market arguments supporting this type of censorship by contending that social media companies were private entities, and the government cannot prevent them from censoring speech. Suspiciously, within one week of Elon Musk buying Twitter with the intent on making it a free speech platform by stopping the unbalanced censorship of conservatives, the Democrats have flipped their position. The Biden administration is creating a Disinformation Governance Board which gives a government agency the power to censor political speech on private social media platforms. In a matter of one week, the left went from claiming that the government cannot tell private companies not to censor speech, to the government must tell private companies what speech to censor.

They do not realize how dangerous what they are doing actually is. Agencies like this never disappear. They only get bigger, stronger, more pervasive, more totalitarian, and possibly become under the control of your opponent. It is not a guarantee that Democrats will always control Washington like they do now, especially when they are staring at potential landslide defeats in both 2022 and 2024. And when the Republicans take control, they will most likely put their own disinformation czar in place who may disproportionately censor Democrats, and there will be nothing the Democrats can do about it.

Voltaire said, "Those who can make you believe absurdities, can make you commit atrocities." Joseph Goebbels was Adolf Hitler’s right-hand man, and minister of propaganda. His job was to indoctrinate the German people into the Nazi way of thinking. The propagandizing an entire population led to the atrocities committed by the Nazis. The Disinformation Governance Board that the Biden administration is creating, is their version of Goebbels ministry of propaganda. Censorship is a type of propaganda and will get people to believe absurdities. When one side of the political argument is censored, political discourse invariably mutates to the most extreme on the other side because there will be no pushback to keep it honest.

The party pushing this Disinformation Board also want us to believe that they are so virtuous that they should be trusted to control the information because they would never peddle disinformation. But the left has shown time and again, they are arguably the biggest purveyor of misinformation. They claimed that Trump colluded with the Russians, Hunter Biden’s laptop was Russian disinformation, Brett Kavanaugh was a gang rapist, BLM riots were “peaceful protests”, our southern border is closed, the Benghazi attack was caused by a YouTube video, Covid came from a bat, all white people are racists, the United States law enforcement is systemically racist. Each of these claims were lies and spread on social media by many of the people supporting Biden’s Disinformation Governance Board.

The person Joe Biden has chosen to be the new disinformation czar, Nina Jankowicz, is as much of a leftwing partisan who spreads false stories and lies as anyone. She was one of the loudest voices pushing the Russian collusion hoax and discrediting the Hunter Biden laptop story. She has also claimed that mockery of Vice President Kamala Harris is a threat to national security, that Trump supporters were going to show up armed to the polls…to intimidate people, and that Facebook should censor Breitbart News. Ironically in May 2020 when Donald Trump was in the White House, she spoke out against the creation of this very agency that Biden has pegged her to lead. She said, "I would never want to see our executive branch have that sort of power." But now that her side controls the executive branch, she wants that power for herself.

How arrogant do you have to be to say that I get to talk, and other people don’t. But this is coming from the same party that believes they can spend your money better than you can, they can tell you what medicine to take, they can raise your kids better than you. And how many of these people who want that much control over your life do you respect intellectually, morally, ethically, as human beings? If you had a problem, would you ask Joe Biden, Barack Obama, Nancy Pelosi, Chuck Schumer, Adam Schiff, Jen Psaki or any democrat for advice? Of course not. You would have to be certifiably insane. Yet these people want to tell you what to say, how to think, how to raise your kids, how to spend your money, how to care for your body. Look at what these people have done to our country the past year and a half - the border crisis, drug crisis, violent crime crisis, homeless crisis, inflation crisis, supply chain crisis, have all been caused by decisions made by Democrats. Yet, they want more and more control over our lives? They are the most arrogant, insecure and self-unaware group of people in our country. And most dangerously, they are completely devoid of principles.

On almost every issue, Democrats will stand on principle when that principle supports what they want, but they will just as easily violate that principle when it stands in their way. Democrats will argue that it is “my body, my choice” when they are advocating for unfettered abortions, but they completely abandoned that principle when they wanted to mandate vaccines. In May 2020, many Democrats claimed that public protests against the government mandated Covid lockdowns were dangerous, super spreader events, and should be shut down claiming no one has a right to protest during a pandemic, but then two weeks later, they completely supported the Black Lives Matter protests and riots in our major cities during the pandemic.

They have made impassioned arguments that the United States must help defend the Ukrainian border from invasion by the Russians, because borders are sacrosanct, while at the same time, they have completely opened our southern border because they believe our borders are racist and must be erased. They are a party without principles. If you do not apply your principles consistently, they are not principles. They are whims. Consistent adherence is the foundation of a principle. If you pick and choose when you apply a principle based on how convenient or beneficial it is, you cannot claim it as a principle. But they do this all the time. Their only guiding principle is to do whatever they have to do to gain and hold power. And in this case, it is to control the dissemination of information.

The most dangerous form of disinformation is the belief that your side is always right, and the other side is always wrong to the point that your side should be empowered to determine what information people can see and what information they are not allowed to see. This opens the door to massive spreading of lies and propaganda because push back will no longer be allowed, and there will be no mechanism to counter and correct the lies and propaganda that will inevitably be spread. And the fact that the people who are advocating for this Disinformation Governance Board cannot see the dangers involved means that they have become so blinded by their own lies that they are no longer able to recognize the basic and obvious truth about the necessity of free speech.

Judd Garrett is a graduate from Princeton University, and a former NFL player, coach, and executive. He has been a contributor to the website Real Clear Politics. He has recently published his first novel, No Wind.
Ministry of Disinformation (objectivityistheobjective.com)