Gaslighting 101: How the Democrats Invented White Supremacy but Blame Republicans 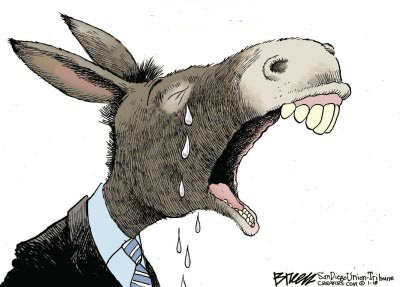 If you were to believe leftist, bolshie rhetoric you’d think mullet-topped bumpkins with muskets were falling out of every Ford F-150 rambling the back roads of ‘Merica, looking to lynch black folks.

The Democrats like to throw around the term “white supremacy” every chance they get. Joe Biden, who gave a eulogy for an actual Klansman — Hillary Clinton mentor Sen. Robert Byrd (D-W.Va.), the longest-serving senator in history — dared call 17-year-old Kyle Rittenhouse a “white supremacist” after he lawfully ventilated three white Antifa prags in self-defense. The ONE attacker he didn’t shoot was the black guy who kicked him while Rittenhouse was on the ground.

“White supremacy” has been the left’s leading attack phrase for several years now, used especially frequently by chubby, pink-haired unf***bles of uncertain gender when a science-American refuses to refer to it by some ridiculous pronoun not recognized by Webster’s Dictionary.

But what today’s low-T progressives may not realize (or may not care about) is that “white supremacy” was born through the greedy, hateful loins of Democrats several centuries ago and would likely be nothing more than a horrible memory by now if liberals weren’t so dog-gone eager to keep their own racism alive. And the best way to maintain hate is to blame Republicans, the party that ended slavery, for the “white supremacy” that the desperate left needs to be today’s boogeyman.

For the record, there is almost no real, organized white supremacy today. Yes, the Klan is out there, but the FBI and the Anti-Defamation League agree there are about 3,000 Klan klowns left. You’re more likely to find a testicle at an Antifa rally than an actual white supremacist in the South.

FACT-O-RAMA! I did a comedy gig in Elkton, Md. I overheard one dude tell another “Bobby voted for Hillary. Can you believe that? And he’s in the Klan.” Nearby town, Rising Sun, Md. was once the home of the Klan’s leader, which is called either a Grand Poo-poo or an Exalted Gelding; I can’t recall.

Here are some fun facts about white supremacists you can share with your liberal sister-in-law when she and her man-bunned femme-boi try to ruin your Memorial Day BBQ by whining about Orange Man Bad and his “legions” of white supremacists.

Calls for anti-lynching laws were ignored in the 20th century. Eleanor Roosevelt lobbied her husband, President Franklin Delano Roosevelt (a Democrat), to sign anti-lynching legislation when it would have meant something. He refused, claiming that if he did sign it, he would lose the support of Southern Democrats (WHO WANTED TO KEEP LYNCHING BLACK PEOPLE).

FARCE-O-RAMA! The U.S. passed an anti-lynching law in 2022, roughly 35 years after the last lynching of a black man. Thanks a lot, FDR.

Republicans came out WAY more for black folks than the Democrats did in both votes. Some Republicans voted NAY because they thought the acts didn’t go far enough for black people. The missing votes were from people who abstained in one way or another.

The most embarrassing lie the Democrats repeat is that somehow the Democrats decided to stop being racist AF at the SAME TIME Republicans thought, “Man I could sink my choppers into some serious racial hatred right about now.”

True, the Republicans started off being more for a big federal government at first so that they could end slavery. When they completed that task on their “to-do” list, they wanted a smaller federal input.

Butt as far as the two sides wife-swapping on racism, nothing can be further from the truth. But rather than explain it, I HIGHLY recommend you watch this brief video from PragerU. It explains the situation succinctly and easily in a brilliant way.

By now you’re thinking, “Wow KJD, you’re right. I’d like to buy you a bourbon and talk about guns for a while now.”

We aren’t done yet.

Democrats are still pushing the myth of white supremacy today. Why? Because it’s the last arrow in their quiver, and they have nothing else to stand on.

Joe Biden recently spoke about the 18-year-old white supremacist who shot black people in Buffalo, N.Y. He somehow missed the fact that the monster is a seething, hateful leftist. He even mentioned the “white supremacist” in Dallas who recently shot three Korean women. I guess his puppet masters “forgot” to tell him that the Dallas shooter was a black man. His “mistake” was never corrected. Rep. Joyce Beatty, (D-Ohio), the chairwoman of the Congressional Black Caucus, was only too eager to befool herself on the national stage and pile into Biden’s clown car of idiocy.

“On Monday, three people in a Korean-owned hair salon in Dallas were gunned by yet another White supremacy replacement theorist,” she said. “We are sick of the pipeline from racist rhetoric to racist violence.”

You can watch the hitherto unknown Maxine Waters wannabe embarrass herself here.

Conservative white supremacy is a myth perpetuated by Democrats. What else can they do to make black people feel angry and powerless and keep them voting “D”?

I’m having Bluff Springs bourbon and my usual Romeo and Juliet 1875 cigar. I also highly recommend you buy ammo. The founding fathers wrote the 2nd Amendment for a reason. I hope we don’t have to use that Amendment but if we do…

The Myth of White Supremacy Is Getting People Killed, But the Media Isn’t Telling You About It