Identify politics fuels the Democratic Party. True to form, Hillary Clinton engages in heated, hateful rhetoric designed to divide Americans along gender, class and racial lines, while claiming she wants to unite our country. The below article by Jeffrey Lord exposes Mrs. Clinton’s key divisive tactic--race-baiting. Further below is an article by Ian Schwartz about how Republicans are now fighting back.
Particularly disgusting is how Democrats have played the race card every election cycle, since the days of slavery. Democrats first used brutality and discriminatory laws to stop black Americans from voting for Republicans. Now Democrats use deception and government handouts to keep blacks from voting for Republicans.


Will the GOP finally challenge liberals on identity politics? 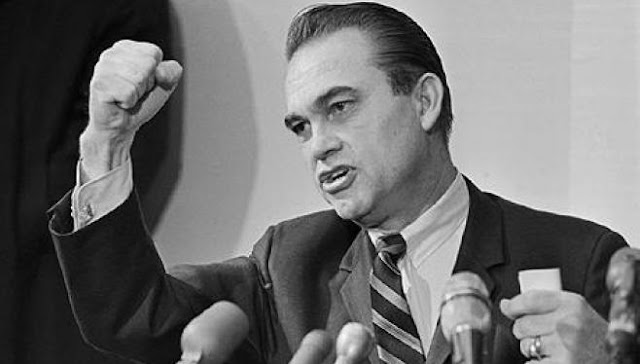 Photo: Democrat former Alabama Governor George Wallace who fought against civil rights for blacks
Well, that didn’t take long.
Here we are barely at the half-way mark of the year before the presidential election — and right on cue Hillary Clinton is out there playing the race card, this time using the vehicle of voter ID cards. Ah yes. Nothing like using racism to stir the liberal base.


In last year’s election cycle Americans had to wait until the closing days of the campaign before Democrats running for office in states like Georgia, Kentucky, Maryland, and North Carolina began the usual left-wing race baiting. The Wall Street Journal noted this here-we-go-again tactic in an October 26, 2014 editorial titled: “The 2014 Race Card: Democratic appeals to racial division are worse than ever.”


Right. But pay no attention to the reality that African-American voters, like every other American, already possess ID cards or they could never navigate a society that requires a picture ID for everything from getting a book out of the local library to driving a car, cashing a check or buying a plane ticket and oh so much more.


Yet here we are again, this time with Hillary Clinton making the racial pitch at Texas South University. In an irony of ironies, she was accepting an award named for former Texas Rep. Barbara Jordan, an African-American who made her mark impeaching a president who lied to the American people back there in 1974. As one recalls, Mrs. Clinton has a distinctively selective approach to presidents who look the American people in the eye and don’t tell the truth. Mrs. Clinton, it must also be noted, is only the latest in a very, very long line of prominent Democrats stretching back centuries to employ the formula of stirring racial animosity to win votes for the progressive agenda. How does this disreputable game work? Here’s three quotes stretched over merely the last 113 years that can give a flavor of the game over the years.


"Discrimination! Why that is exactly what we propose. To remove every negro voter who can be gotten rid of, legally, without materially impairing the numerical strength of the white electorate.” —Carter Glass, 1902


"Let us rise to the call of freedom-loving blood that is in us, and send our answer to the tyranny that clanks its chains upon the South. In the name of the greatest people that have ever trod this earth, I draw a line in the dust and toss the gauntlet before the feet of tyranny, and I say, segregation now, segregation tomorrow and segregation forever.” — George C. Wallace, 1963


“And we have a responsibility to say clearly and directly what’s really going on in our country—because what is happening is a sweeping effort to disempower and disenfranchise people of color…. Now some of you may have heard me or my husband say one of our favorite sayings from Arkansas, of course I learned it from him. “You find a turtle on a fence post, it did not get there on its own.” Well, all of these problems with voting did not just happen by accident…. So today, Republicans are systematically and deliberately trying to stop millions of American citizens from voting. What part of democracy are they afraid of? — Hillary Clinton, 2015


For those who came in late, Carter Glass was a progressive champion and a delegate to the Virginia Constitutional Convention charged with writing a new governing document for the state. Glass was pitching for the votes of poor, white Virginians by writing in literacy tests and poll taxes to the new constitution. Glass would go on to be the influential Virginia congressman who supported Woodrow Wilson for president, created the Federal Reserve, served as Wilson’s Secretary of the Treasury and later the Democratic Senator from Virginia who co-authored the much liberal-championed Glass-Steagall Act of 1933 that regulated banks and security firms.


George Wallace, of course, was the longtime Democratic governor of Alabama who was crippled in an assassination attempt when he was running for the Democrats’ presidential nomination in 1972. He made another try in 1976 before yielding to Jimmy Carter. That would be the same Jimmy Carter who won his election as governor of Georgia in 1970 by playing the race card, specifically allying himself with a leading Georgia racist name Roy Harris, as detailed here back in 2009. It is no accident that only the other day Carter was at it again, telling the AARP that “many Americans still have racist tendencies or feelings of superiority to people of color.” Based on his record running for governor, one can only assume Carter is speaking for himself.


That Hillary Clinton would play the race card was inevitable. This is what Democrats do and have always done from the days of using slavery as a political organizing pole right on down to today’s “hands up don’t shoot’” monstrosity that plays to race. The only surprise is just how early in the 2016 campaign this latest race card playing has arrived.


The question then becomes: when will Republicans start hitting back instead of letting themselves become a racial punching bag — again?


It is time — way, way past time — for Republicans to start taking their campaigns in an aggressive way to African-Americans. Baltimore, but of course, would be Exhibit A. After decade after decade after decade of being run 100% by liberals — whether whites like ex-Baltimore Mayor Martin O’Malley or African-Americans like the last several mayors and the current political elite of the city — the riots in Baltimore provided the GOP with a considerable opening.


Even as the fires burned there were Baltimore city officials — liberals one and all — complaining that their residents had no opportunity, no jobs and a lousy educational system to boot. Or in other words, well aside from admitting to their own personal failures of leadership, they were admitting that the liberal/progressive philosophy — aka “social justice” — that depends on using race card-playing to win the electoral day for progressive policies s not only racist but an utter failure.


Will the GOP take this issue head on? It’s fine to be upbeat and positive — that’s not only good leadership its a moral necessity — but to be silent on just how liberals play the race card game is not only political idiocy it is now, at long last, no longer acceptable. The left-wing formula — exactly as Hillary Clinton used it the other day in her Texas speech — of scaring people about race to enact the latest progressive utopia must be challenged. The results of the left-wing race/progressive policy link speak for themselves — and they should be pointed out relentlessly.


Called out. Spotlighted. History provided. In long form on candidate websites and in a punchy speech version. Not to mention accompanied by policy papers. Otherwise?


Otherwise this game will go on. And on and on and on. As it has for some two centuries. Providing, in the end, nothing but poverty, misery and inequality for yet another generation of African Americans. Setting them up to be merely the latest pawns in a disgraceful progressive game that in fact, as was evidenced recently in Baltimore, winds up at bottom killing more black kids.


So confident is Hillary Clinton in the traditional ways of liberal race card playing that she has no expectation of any Republican finally confronting her with this latest salvo of identity politics. She clearly feels quite comfortable making her race pitch — even calling out specific Republican candidates by name as if they or the GOP were the problem here. As if, indeed.


Do black lives matter? Or not?

Trump Supporter Jeffrey Lord vs. Van Jones on Trump, KKK: "You Are Dividing People By Race"

See the CNN Video at:  https://youtu.be/mUIs5K2Snpk
Van Jones and Trump supporter Jeffrey Lord have a heated debate on the race factor in the Trump electorate as well as everything from civil rights, the Central Park jogger case, the Klan and Reverend Jeremiah Wright.

Lord argued the Ku Klux Klan was a "military, terrorist arm of the Democratic party"

"For God's sake, read your history," Lord said to Jones.

Jones linked Trump to the Central Park jogger case where 4 black men and 1 Hispanic man were wrongfully convicted of raping a woman. Eventually a Hispanic man admitted to committing the crime.

"The whole thing with the Central Park jogger kids, he got the entire city of New York whipped up that these kids had done something wrong. And then when he was wrong, he never apologized to them," Jones protested.

This is what liberalism is all about," Lord added.

"The Klan divides by race, the Klan killed people by race," Jones said.

"They did it to support the progressive agenda," Lord argued.