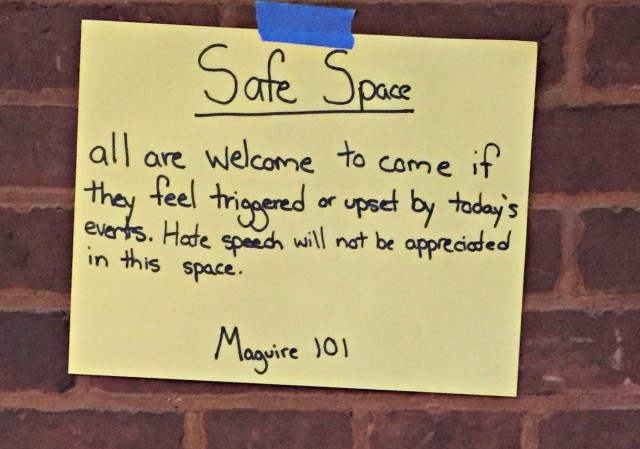 If I were to offer one piece of advice to university presidents, it would be to watch the scene from The Social Network in which Harvard President Larry Summers tells the Winklevoss twins to grow up and stop complaining about the actions of other students. “This action,” says Summers, “the two of you being here, is wrong.”


That’s precisely the response that university presidents should give to students who come, claiming fear and trembling, to see university presidents because they’re unhappy with the speech of other students. Instead, all too often, these students are indulged in a way that the Winklevoss twins were not, with consequences for the university, for higher education — and, actually for the complaining students themselves — that are likely to prove disastrous.


The latest example of this phenomenon can be found at Emory University in Atlanta.


At Emory, students of the “social justice” variety were upset when someone chalked ”Trump 2016” on sidewalks. The students announced that they felt “fear” and “pain” as a result. The students challenged the administration; one student demanded that it “decry the support for this fascist, racist candidate.” According to TheEmory Wheel, another student complained: “I’m supposed to feel comfortable and safe (here). But this man is being supported by students on our campus and our administration shows that they, by their silence, support it as well … I don’t deserve to feel afraid at my school.”


Emory President James Wagner at first showed a bit of resistance, but quickly caved, promising to identify and discipline the authors of the offending pro-Trump writings. TheEmory Wheel reported, "The University will review footage 'up by the hospital [from] security cameras' to identify those who made the chalkings, Wagner told the protesters. He also added that if they’re students, they will go through the conduct violation process, while if they are from outside of the University, trespassing charges will be pressed."


As New York Magazine’s Jesse Singal wrote, this response was “extremely creepy, and a sign that something has gone seriously wrong.”


Writing in The Atlantic, Conor Friedersdorf noted that this sort of embarrassing student “activism” is actually fueling Trump’s rise. And as Reason’s Robby Soave commented: “No wonder so many non-liberal students are cheering for Trump — not because they like him, but because he represents glorious resistance to the noxious political correctness and censorship that has come to define the modern college experience.”


But Friedersdorf makes another point, one that college presidents should keep in mind: The Emory protesters managed to fill a conference room and meet with Emory President James Wagner, but they don’t actually represent the feelings of Emory students overall. He observes: “On Yik Yak, a social media app popular among college students in large part because it permits anonymous speech, the Emory student reaction to the chalk controversy wasn’t mixed, as often happens when one views that platform during a campus controversy. It was clearly, overwhelmingly antagonistic to the student activists.”


Freed from a fear that student “activists” — and their allies in the university’s Student Life and Diversity offices — might punish them, students expressed their true feelings, and they demonstrate that the “activists” are a small, unrepresentative slice that is being indulged at the expense of the university as a whole. (This is probably why so many campus administrations and activists don’t like Yik Yak: It allows students to express themselves without fear of repercussions.)


And indulging those activists is dangerous to universities because it makes them ridiculous. As Friedersdorf also notes, Emory and its “fearful” students were widely mocked, even in the liberal press. And they deserved to be mocked, because their behavior was childish and silly.


Higher education already faces falling enrollments, reduced public support and a general decline in public esteem. In Connecticut, the state legislature is even looking at taxing the enormous endowment of Yale University. Universities used to be revered, but now, as Walter Russell Mead writes, “From the point of view of much of the public, highly-endowed colleges are becoming an underperforming asset: The feeling is growing that elite fat cat universities are an expensive luxury, and that the money spent propping up their endowments would be better spent buying school lunches for needy kids, or topping off up the pensions of retired civil servants.”


When students at Emory University — annual cost of attendance, $63,058 per year — act so foolishly , and worse, are indulged by those who are supposed to supply adult guidance, it gives the appearance that higher education is largely a waste of societal resources. That’s not a good place to be, right now. University presidents, take note.


Glenn Harlan Reynolds, a University of Tennessee law professor, is the author of The New School: How the Information Age Will Save American Education from Itself, and a member of USA TODAY's Board of Contributors.
Posted by Frances Rice at 12:24 PM