The Abortion Industry Supported By Democrats Engages in Black Genocide 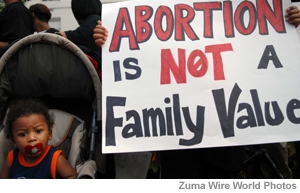 Taking a page out f the Democratic Party's election-year playbook, Democrat operative Chris Matthews ignited a media firestorm by getting Donald Trump to respond to a hypothetical question about abortion, a response Trump later walked back.
It's stunning how Democratic Party operatives and other pundits and politicians who are expressing outrage over Trump’s words seem unconcerned about the devastating impact that the reality of abortion has on Black Americans.
Below is information extracted from the website “BlackGenocide” at this link.

Planned Parenthood is the largest abortion provider in America. 78% of their clinics are in minority communities.
Blacks make up 12% of the population, but 35% of the abortions in America.
According to the Allan Guttmacher Institute, Black American women are nearly five times more likely than non-Hispanic white women to have an abortion.
The Centers for Disease Control and Prevention reports that almost one in every two Black American pregnancies ends in abortion.
On average, 1,876 Black babies are aborted every day in the United States.
It has been estimated that since 1973 Black women have had about 16 million abortions.
If someone wiped out the entire Black American population in Oakland, Atlanta, and Washington, D.C., the number still wouldn't equal the number of Black babies lost to abortion in one year: 683,294.
Michael Novak had calculated "Since the number of current living Blacks (in the U.S.) is 36 million, the missing 16 million represents an enormous loss, for without abortion, America's Black community would now number 52 million persons.
Black Americans are the only minority in America that is on the decline in population.
If the current trend continues, by 2038 the Black vote will be insignificant.
So, the questions becomes, are Black Americans being targeted?
Does what is happening in Black communities amount to Black genocide?


Disturbingly repulsive is the fact that the founder of Planned Parenthood, Margaret Sanger, was a devout racist who created the Negro Project designed to sterilize unknowing Black women and others she deemed as undesirables of society.
Sanger said, "Colored people are like human weeds and are to be exterminated."


Is her vision being fulfilled today?
The obvious answer is "yes."
While the press, pundits and politicians ignore how the abortion industry is engaged in Black genocide, they are obsessing over Trump's answer to the hypothetical question: IF abortion were made illegal, should a woman who violates the law be punished?
Posted by Frances Rice at 5:42 PM