Were The Nazis Socialists?


Amazingly, pundits are accusing the Republican Party’s presidential election front runner, Donald Trump, a capitalist, of being like Adolph Hitler, a socialist.
Meanwhile, the real socialists are President Barack Obama and the Democratic Party's two candidates running to replace him, Bernie Sanders and Hillary Clinton.
And yes, Hitler was a socialist. The word “Nazi” is the German acronym for “National German Socialist Workers’ Party.” Details are in the below article.
_______________


Leftists become incandescent when reminded of the socialist roots of Nazism 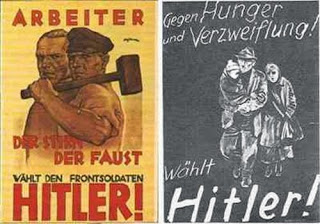 You can't accuse the NSDAP of downplaying the "Socialist" bit
On 16 June 1941, as Hitler readied his forces for Operation Barbarossa, Josef Goebbels looked forward to the new order that the Nazis would impose on a conquered Russia. There would be no come-back, he wrote, for capitalists nor priests nor Tsars. Rather, in the place of debased, Jewish Bolshevism, the Wehrmacht would deliver “der echte Sozialismus”: real socialism.
Goebbels never doubted that he was a socialist. He understood Nazism to be a better and more plausible form of socialism than that propagated by Lenin. Instead of spreading itself across different nations, it would operate within the unit of the Volk.
So total is the cultural victory of the modern Left that the merely to recount this fact is jarring. But few at the time would have found it especially contentious. As George Watson put it in The Lost Literature of Socialism:
It is now clear beyond all reasonable doubt that Hitler and his associates believed they were socialists, and that others, including democratic socialists, thought so too.
The clue is in the name. Subsequent generations of Leftists have tried to explain away the awkward nomenclature of the National Socialist German Workers’ Party as either a cynical PR stunt or an embarrassing coincidence. In fact, the name meant what it said.
Hitler told Hermann Rauschning, a Prussian who briefly worked for the Nazis before rejecting them and fleeing the country, that he had admired much of the thinking of the revolutionaries he had known as a young man; but he felt that they had been talkers, not doers. “I have put into practice what these peddlers and pen pushers have timidly begun,” he boasted, adding that “the whole of National Socialism” was “based on Marx”.
Marx’s error, Hitler believed, had been to foster class war instead of national unity – to set workers against industrialists instead of conscripting both groups into a corporatist order. His aim, he told his economic adviser, Otto Wagener, was to “convert the German Volk to socialism without simply killing off the old individualists” – by which he meant the bankers and factory owners who could, he thought, serve socialism better by generating revenue for the state. “What Marxism, Leninism and Stalinism failed to accomplish,” he told Wagener, “we shall be in a position to achieve.”
Leftist readers may by now be seething. Whenever I touch on this subject, it elicits an almost berserk reaction from people who think of themselves as progressives and see anti-fascism as part of their ideology. Well, chaps, maybe now you know how we conservatives feel when you loosely associate Nazism with “the Right”.
To be absolutely clear, I don’t believe that modern Leftists have subliminal Nazi leanings, or that their loathing of Hitler is in any way feigned. That’s not my argument. What I want to do, by holding up the mirror, is to take on the equally false idea that there is an ideological continuum between free-marketers and fascists.


The idea that Nazism is a more extreme form of conservatism has insinuated its way into popular culture. You hear it, not only when spotty students yell “fascist” at Tories, but when pundits talk of revolutionary anti-capitalist parties, such as the BNP and Golden Dawn, as “far Right”.
What is it based on, this connection? Little beyond a jejune sense that Left-wing means compassionate and Right-wing means nasty and fascists are nasty. When written down like that, the notion sounds idiotic, but think of the groups around the world that the BBC, for example, calls “Right-wing”: the Taliban, who want communal ownership of goods; the Iranian revolutionaries, who abolished the monarchy, seized industries and destroyed the middle class; Vladimir Zhirinovsky, who pined for Stalinism. The “Nazis-were-far-Right” shtick is a symptom of the wider notion that “Right-wing” is a synonym for “baddie”.
One of my constituents once complained to the Beeb about a report on the repression of Mexico's indigenous peoples, in which the government was labelled Right-wing. The governing party, he pointed out, was a member of the Socialist International and, again, the give-away was in its name: Institutional Revolutionary Party. The BBC’s response was priceless. Yes, it accepted that the party was socialist, “but what our correspondent was trying to get across was that it is authoritarian”.
In fact, authoritarianism was the common feature of socialists of both National and Leninist varieties, who rushed to stick each other in prison camps or before firing squads. Each faction loathed the other as heretical, but both scorned free-market individualists as beyond redemption. Their battle was all the fiercer, as Hayek pointed out in 1944, because it was a battle between brothers.
Authoritarianism – or, to give it a less loaded name, the belief that state compulsion is justified in pursuit of a higher goal, such as scientific progress or greater equality – was traditionally a characteristic of the social democrats as much as of the revolutionaries.
Jonah Goldberg has chronicled the phenomenon at length in his magnum opus, Liberal Fascism. Lots of people take offence at his title, evidently without reading the book since, in the first few pages, Jonah reveals that the phrase is not his own. He is quoting that impeccable progressive H.G. Wells who, in 1932, told the Young Liberals that they must become “liberal fascists” and “enlightened Nazis”.
In those days, most prominent Leftists intellectuals, including Wells, Jack London, Havelock Ellis and the Webbs, tended to favour eugenics, convinced that only religious hang-ups were holding back the development of a healthier species. The unapologetic way in which they spelt out the consequences have, like Hitler’s actual words, been largely edited from our discourse. Here, for example, is George Bernard Shaw in 1933:
Extermination must be put on a scientific basis if it is ever to be carried out humanely and apologetically as well as thoroughly… If we desire a certain type of civilisation and culture we must exterminate the sort of people who do not fit into it.
Eugenics, of course, topples easily into racism. Engels himself wrote of the “racial trash” – the groups who would necessarily be supplanted as scientific socialism came into its own. Season this outlook with a sprinkling of anti-capitalism and you often got Leftist anti-Semitism – something else we have edited from our memory, but which once went without saying. “How, as a socialist, can you not be an anti-Semite?” Hitler had asked his party members in 1920.
Are contemporary Leftist critics of Israel secretly anti-Semitic? No, not in the vast majority of cases. Are modern socialists inwardly yearning to put global warming sceptics in prison camps? Nope. Do Keynesians want the whole apparatus of corporatism, expressed by Mussolini as “everything in the state, nothing outside the state”? Again, no. There are idiots who discredit every cause, of course, but most people on the Left are sincere in their stated commitment to human rights, personal dignity and pluralism.
My beef with many (not all) Leftists is a simpler one. By refusing to return the compliment, by assuming a moral superiority, they make political dialogue almost impossible. Using the soubriquet “Right-wing” to mean “something undesirable” is a small but important example.
Next time you hear Leftists use the word fascist as a general insult, gently point out the difference between what they like to imagine the NSDAP stood for and what it actually proclaimed. 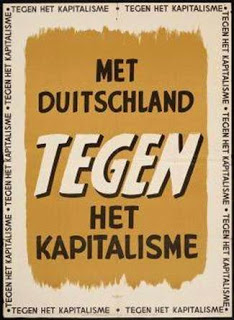 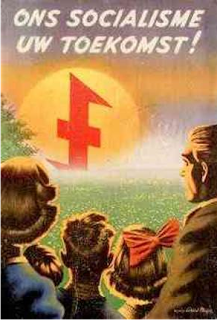 
Below is an image from German Nazi Party that reads:  “The National Socialist German worker stands against capitalism”. 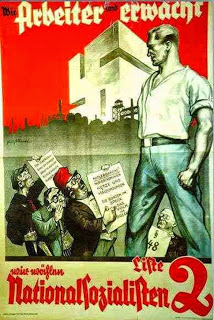 http://blogs.telegraph.co.uk/news/danielhannan/100260720/whenever-you-mention-fascisms-socialist-roots-left-wingers-become-incandescent-why/
Posted by Frances Rice at 11:22 AM