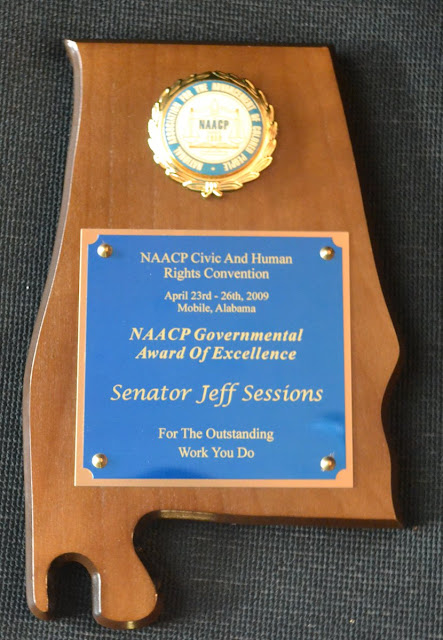 By Leah Barkoukis
The NAACP has been highly critical of President Trump’s nomination of Sen. Jeff Sessions to be U.S. attorney general, but it seems the group is unaware that its Alabama chapter doesn’t seem to agree—or least it didn’t back in 2009 when it awarded him their “Governmental Award of Excellence.”
The award was recently located while Sessions’ aide was helping him clean out his office to prepare for his move to the DOJ, Politico reported. The Alabama senator even had to send in a supplemental response to the Senate Committee on the Judiciary’s questionnaire regarding honors and awards he’s received.
“Apparently [NAACP President Cornell Brooks] doesn’t stay in contact with the NAACP chapter in Alabama,” Sen. Lindsey Graham (R-S.C.) said Tuesday while sharing news of the award on the Senate floor. “Most of the things said about Jeff Sessions and the way he acted as a senator could be said about almost all of us on this side who consider themselves conservative.”


Graham has been particularly critical of the NAACP’s opposition to Sessions, calling out the organization for its anti-GOP bias during his confirmation hearing last month.
NAACP President and CEO Cornell William Brooks has argued that Sessions' "record suggests that he will carry on an old, ugly legacy in this country’s history when civil rights for African-Americans, women and minorities were not regarded as core American values."
http://townhall.com/tipsheet/leahbarkoukis/2017/02/08/naacp-gave-racist-jeff-sessions-award-for-excellence-in-2009-n2283209?utm_source=thdailypm&utm_medium=email&utm_campaign=nl_pm&newsletterad=
Posted by Frances Rice at 10:33 AM