'The Tone Is Hatred': At Presser, Trump Asks CNN To Do Some Self-Reflection 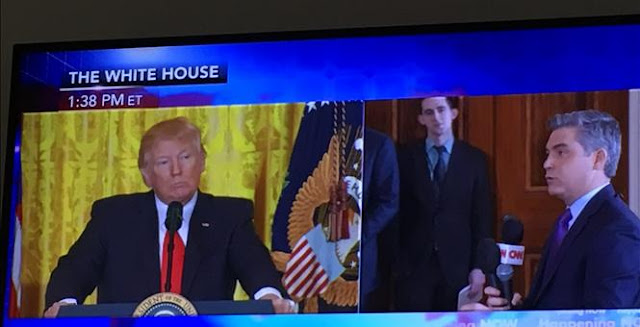 
It was supposed to be a presser for Trump to announce his new labor secretary nominee, which he did, but he spent a much longer time criticizing the media for their continued "fake news" coverage. In particular, he was incensed that multiple outlets were reporting false information about leaks coming out of the White House.
At CNN, Trump said, "there is so much hatred and anger" toward him that he just can't understand.
Seeing Acosta shake his head at his remarks, Trump said, "it's okay, Jim, you'll get your chance," meaning he'd soon call on him for a question. 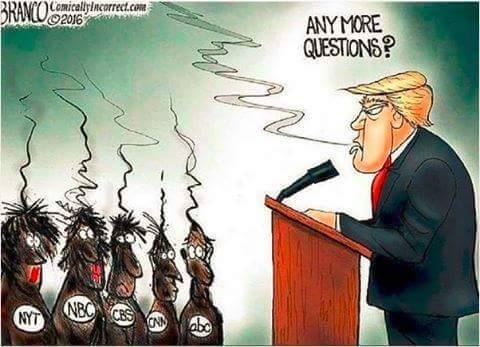 "The public doesn't believe you people anymore," he frankly told Acosta and his network.
Acosta, in response, told Trump that he nor CNN hates him and proceeded to ask his questions.
"Are you undermining people's faith in the First Amendment" and the news media, he wondered.
"I know when I should get bad media," Trump said, disagreeing and noting that CNN airs bad news every single night.
Trump then asked CNN to do some self reflection. He told them to honestly consider not airing such anti-Trump news every night, and they'll see their ratings rise.
"If you told it like it is, I would be your biggest booster."
This was at least the second time Trump has butted heads with Acosta at a press conference. Last month, the president-elect dismissed Acosta as "fake news" and refused to answer his question.
Trump had plenty of other mini battles with reporters at Thursday's conference, which resulted in a very entertaining hour.


https://townhall.com/tipsheet/cortneyobrien/2017/02/16/trump-takes-on-cnns-acosta-again-n2286916?utm_source=thdailypm&utm_medium=email&utm_campaign=nl_pm&newsletterad=
_____________
The Left's All-Out War on Trump
By David Limbaugh 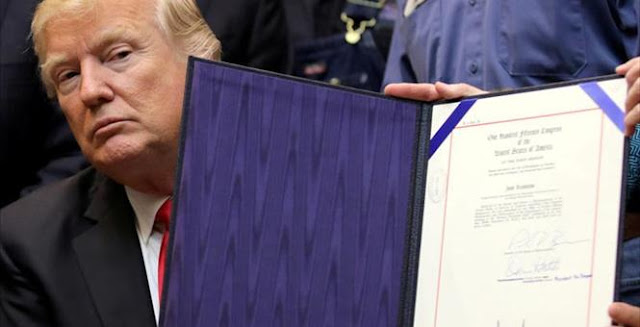 Please don't tell us conservatives that we need to find common ground with the left during this era of Trump. That would only advance liberals' cause, because they have no intention of working with President Trump. They are conducting an all-out war against him and his administration, and appeasement efforts wouldn't change that.

What the naive among us need to understand is that the left plays hardball. Liberals subscribe to an end-justifies-the-means philosophy. They are not fair. They don't intend to be fair. They believe they are entitled to advance their America-transforming agenda whether in or out of power, and no amount of wishful thinking can alter that reality.


They will say and do practically anything to further their vision for America, and it doesn't matter if they did the opposite yesterday. A foolish consistency is the hobgoblin of little conservative minds.
The leftist machine purports to be opposed to Trump for his allegedly dastardly actions, but he has barely had time to get started (though he deserves great credit for what he has done so far). Truth be told, liberals' opposition springs not from what he's done -- other than the travel ban -- but from who he is and the threat he represents to their agenda.
They told us he would be a tyrannical autocrat, and just four weeks into his term, they claim to have him dead to rights on the charge. Yet Trump has not engaged in any illegal conduct or committed any lawless overreaches. President Obama, on the other hand, was habitually lawless, and the left, far from being concerned, reveled in it. Ends and means.
Understand this: The left has no evidence that Trump colluded with Russia to affect our election. It is absurd that we are even forced to talk about this. Smear with innuendo and slander -- that's liberals' MO.
In case you haven't noticed, these professional malcontents have organized throughout the nation, with more than a little help from the community organizer in ex-chief, Barack Obama. They have placed themselves throughout the nation to make mischief -- not the kind you smile at but the kind designed to bring down a duly elected president.
With remarkable foresight and patience, progressives have conspired for decades to plant themselves in America's important institutions, from the universities to the halls of government in secure civil service jobs. Many of these people are working overtime inside and outside government to undermine, scandalize, sabotage and ultimately bring down the Trump administration in its incipiency. That tactic is a lot easier than trying to block his desperately needed reform agenda on the merits.
I strongly suspect that leftists within our intelligence agencies criminally leaked classified information to corroborate their claim that Trump colluded with Russia to interfere with the presidential election. They thought they'd hit pay dirt with reports that before Trump took office, his national security adviser, Michael Flynn, had conversations with Russian Ambassador Sergey Kislyak allegedly about reviewing the recent sanctions Obama had imposed on Russia.
Can you imagine the salivating? Here's the smoking gun. Flynn talked to Russia. Trump likes Russian President Vladimir Putin. Russia hacked the United States. Trump won the election. Therefore, Trump colluded with Putin to engineer his election victory over Hillary Clinton. That is one convoluted syllogism, isn't it?
The left doesn't care about the truth of the matter. Once liberals obtained what they considered a colorable morsel of damning evidence, they insisted their fears about Trump were already vindicated. He was guilty as charged. Except that he wasn't.
Flynn has stated that his conversation didn't touch on sanctions. The New York Times, in its story reporting that Trump campaign aides had repeated contacts with Russian intelligence agents, admitted it had seen no evidence of cooperation or collusion between the Trump team and the Russians regarding the election. That little tidbit has not found its way into any headline in the mainstream media.
Liberals hate Trump, and they hate that they lost the election, and they are not going to tolerate it. I hope the rest of America understands that.
They are not only disgracefully pretending they have hard evidence of misconduct leading directly to Trump but also ignoring the egregious misconduct of the leakers and the real threat that poses to national security.
Trump got off to an incredibly impressive start, but liberals have now delivered a blow to his momentum, and they are poised to finish the job. They are strategically placed in our cultural institutions and throughout our vast bureaucracy and are coordinating in every state to stage planned protests that look spontaneous. Richly funded by George Soros and other like-minded America haters, they are inspired by the shadow leadership of former President Obama and his activist organization formed for this very purpose.
I will not defend misconduct on the part of elected officials and their appointees -- if it actually occurs -- just because they are Republicans. But I am not going to sit by silently as the left continues to smear and sabotage this newly inaugurated president based on shards of facts that don't prove their allegations.
I realize that nothing we do will stop the left or dampen its single-minded determination to destroy Trump and preserve Obama's radical agenda, but we can prevent the left from succeeding if we fight back with equal energy and commitment. But that will be impossible unless we fully recognize what's going on -- the tactics of the left and liberals' ruthlessness. We are, in effect, in a war that we didn't start.
So please keep your eyes open and prepare to fight back.
In the meantime, let's pray that President Trump will not be unduly distracted by these efforts and can focus on advancing an agenda that will restore economic growth and shore up America's national security. His news conference on Thursday gives me great confidence that President Trump fully understands what the left is doing. He is undeterred and undistracted -- and pressing forward with his agenda.
The left, in turn, probably now understands that it has unleashed a tiger.