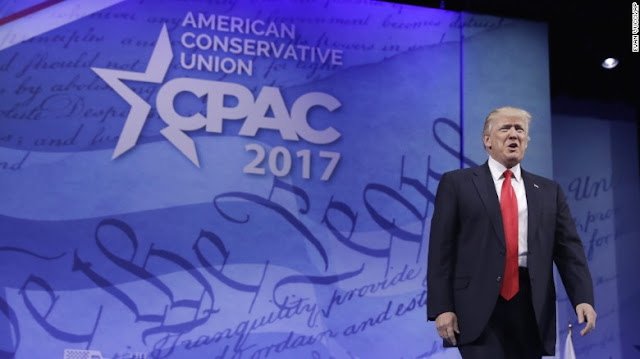 President Trump made a historic return Friday to the Conservative Political Action Conference, telling the crowd, ‘You finally have a president,’ and delivering a wide-ranging speech in which he took aim at ISIS, pushed his plans to combat illegal immigration and vowed to repeal and replace ObamaCare.

He started with a familiar attack on the news media and went so far as to say reporters “shouldn’t be allowed to use sources unless they use somebody’s name.”

"Let them say it to my face. Let there be no more sources," Trump said, though some of his administration officials recently have held briefings where they insisted no names be used.

Trump moved on to defend his agenda and vow major action ahead. On immigration, Trump touted plans for a southern border wall with Mexico and said it was “way, way, way ahead of schedule.”

The speech came as Republicans control Congress and the White House for the first time in a decade. Conservatives have been optimistic about the opportunity to enact big policy changes and looked to Trump to spell out his agenda.

“You finally have a president,” he told the packed room at the 44th annual conference, held this year at National Harbor, Md. “It took you a long time. It’s patriots like you that made it happen.”

In addition to media bashing, Trump's characteristically muscular speech included a defense of his crackdown on illegal immigration.

"We're getting the bad ones out," he said, explaining that the Department of Homeland Security is prioritizing deportation of illegal immigrant criminals.

He repeated his pledge to repeal and replace ObamaCare, an effort that seems stalled in Congress, and touted his effort to get key oil pipelines back on track.

"We're checking off the promises we made to the people of the United States," Trump thundered.

Trump drew raucous applause when he vowed to rebuild the U.S. military and spoke of putting America first, a familiar theme from his campaign.

The speech ended with the campaign theme song, "You Can't Always Get What You Want," the Rolling Stones early 1970s hit played at Trump rallies.

The president’s speech at CPAC also served as a prelude to his first State of the Union-style speech to Congress Tuesday night.

“We conservatives have an opportunity to that only comes around every few generations,” Pence told a pumped-up crowd. “My friends, this is our time.”

Also making a CPAC appearance was White House Counselor Kellyanne Conway who teased Trump’s appearance: “Tomorrow it will be TPAC when (Trump’s) here.”

The conference, which is hosted by the American Conservative Union, began in 1974 and has since grown into a four-day- event. A closely watched straw poll will be conducted Saturday, the last day.

Trump made his first speech at CPAC in 2011. At the time, he floated the possibility of a 2012 presidential run – a nomination that was won by former Massachusetts Gov. Mitt Romney.

He returned in 2015 and was booed after telling the crowd he wanted to use U.S. ground troops to fight ISIS.

Last year, Trump was scheduled to speak at the conservative confab but cancelled at the last minute, saying he would campaign in Kansas and Florida instead.

At the time, the American Conservative Union criticized the move and said his decision sent “a clear message to grassroots conservatives.”


On February 16th, President Donald Trump hastened the public suicide of the media. This un-elected, self-important, elitist machine is driving itself into oblivion.


Since Donald J. Trump announced his candidacy for President of the United States, the media has evolved into a hate-filled, unwanted nuisance. Although they fancy themselves as the fourth branch of government, The United States Constitution defines only three branches of our Federal Government.


In Article I, all legislative powers are granted to the Congress. The importance of law in the United States of America is emphasized by the fact that it is the first of the three branches defined. To the great dismay of Liberals and Progressives, there are laws in America that forbid illegal immigration and the President must enforce them. Oh horror!


Article II gives the President of the United States the Executive power. The responsibilities of this position include: enforcing America’s laws; leading the Armed Forces as Commander-in-Chief; and preserving, protecting and defending the Constitution of the United States. As an Executive, the President must set the course for the country and lead. It has been so long since the United States had a real leader and not a game-playing, self-enhancing elitist posing as a leader that this is a new experience for many. Elites are petrified that Americans will appreciate the difference and demand it in all future Presidents. O Joy!


In Article III, the judicial branch is charged to review all Cases under the microscope of their legality, how they do or do not conform to our Constitution and existing law. Contrary to the behavior of too many, Judges are not permitted to change laws and make decisions based on their personal views or the public’s wishes. Do your job!


Article III also defines Treason against the United States as “levying War against them, or in adhering to their Enemies, giving them Aid and Comfort”. Citizens and legal residents intending to harm us by their actions commit treason. Government personnel who leak confidential information and the media who publish this leaked information are weakening America and giving Aid and Comfort to our enemies. In their attempts to undermine and destroy our President, has this unwanted nuisance descended into Treason? You decide!


So, although President Trump’s ongoing decimation of the media is good entertainment, the public is being cheated by the lack of an unbiased, honest, responsible, fact-based source of information about our many-faceted world. Perhaps after those current members of the media self-destruct due to their over-reaching, truth does not matter, America’s safety be damned, we know best about everything behaviors, responsible journalists will replace them. O please!
Posted by Frances Rice at 12:12 PM