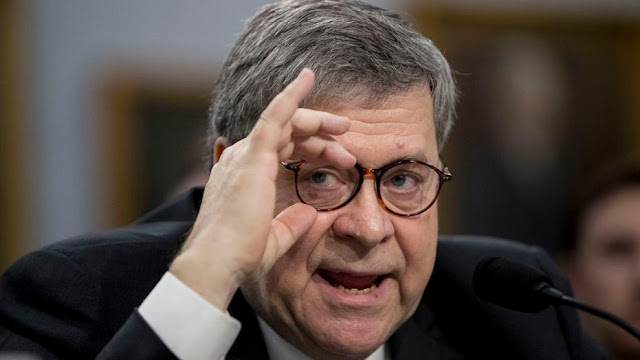 Attorney General William Barr has assembled a "team" to investigate the origins of the FBI's counterintelligence investigation into the Trump campaign, an administration official briefed on the situation told Fox News on Tuesday.

Republicans repeatedly have called for a thorough investigation of the FBI's intelligence practices and the basis of the since-discredited Russian collusion narrative following the conclusion of Special Counsel Robert Mueller's probe.

Now they appear to have assurances that a comprehensive review was underway.

The FBI's July 2016 counterintelligence investigation was formally opened by anti-Trump former FBI agent Peter Strzok. Ex-FBI counsel Lisa Page, with whom Strzok was romantically involved, revealed during a closed-door congressional interview that the FBI “knew so little” about whether allegations against the Trump campaign were “true or not true” at the time they opened the probe, noting they had just “a paucity of evidence because we are just starting down the path” of vetting the allegations.

Page later said that it was “entirely common” that the FBI would begin a counterintelligence investigation with just a “small amount of evidence.”

Former FBI Director James Comey would testify later that when agency initiated its counterintelligence probe into possible collusion between Trump campaign officials and the Russian government, investigators "didn't know whether we had anything" and that "in fact, when I was fired as director [in May 2017], I still didn't know whether there was anything to it."

Barr told lawmakers at a contentious hearing earlier Tuesday that he was reviewing the bureau's “conduct” in particular during the summer of 2016.

The attorney general's explosive testimony marked his first Capitol Hill appearance since he revealed the central findings of Mueller’s investigation, and he indicated the full report -- with redactions -- would be made public within the week.

Mueller's investigation completed last month without securing the indictment of a single American for collusion with Russia or obstruction of justice, "despite multiple offers from Russian-affiliated individuals to assist the Trump campaign."

“I am reviewing the conduct of the investigation and trying to get my arms around all the aspects of the counterintelligence investigation that was conducted during the summer of 2016,” Barr said at the hearing.

Republicans have called for a careful review as to whether the FBI, in violation of Page's constitutional rights and FBI procedures, misled the FISA court or withheld exculpatory information, and Barr testified that a DOJ review of the FBI's FISA practices was in progress.

The FBI's ultimately successful October 2016 warrant application to surveil Page, which relied in part on information from British ex-spy Christopher Steele – whose anti-Trump views are now well-documented – flatly accused Page of conspiring with Russians. Page has never been charged with any wrongdoing, and he since has sued the Democratic National Committee (DNC) for defamation.

The FBI assured the FISA court on numerous occasions -- in the October 2016 warrant application and in subsequent renewals -- that other sources, including a Yahoo News article, independently corroborated Steele's claims, without evidence to back it up. It later emerged that Steele was also the source of the Yahoo News article, written by reporter Michael Isikoff.

The FBI also quoted directly from a disputed Washington Post opinion piece to argue that Trump's views on providing lethal arms to Ukraine, and working towards better relations with Russia, was a possible indicator that the campaign had been compromised.

The Trump campaign, at the time, supported only providing only defensive arms to Ukrainians, and rejected a single Republican delegate's proposed platform amendment that called for providing lethal arms. Later, the Trump administration changed course and approved lethal arms sales to Ukraine.

The FBI did not provide its own independent assessment of whether the Washington Post opinion piece contained accurate information, and did not mention that the Obama administration had the same policy towards arming Ukraine as the one Trump's team supported.

The FBI also did not clearly state that Steele worked for a firm hired by Hillary Clinton's campaign. Instead, the FBI only indicated that Steele's dossier was prepared in conjunction with a presidential campaign.

Fox News also has been told the Justice Department's Inspector General (IG) was looking separately into whether Comey mishandled classified information by including a variety of sensitive matters in his private memos.

A DOJ court filing on Monday night revealed that Comey incorporated into his private documents, among other key details, the name and code name of a confidential human source.

https://www.foxnews.com/politics/barr-assembles-team-to-look-into-counterintelligence-investigation-on-trump-campaign-in-2016-official-says
Posted by Frances Rice at 9:35 AM