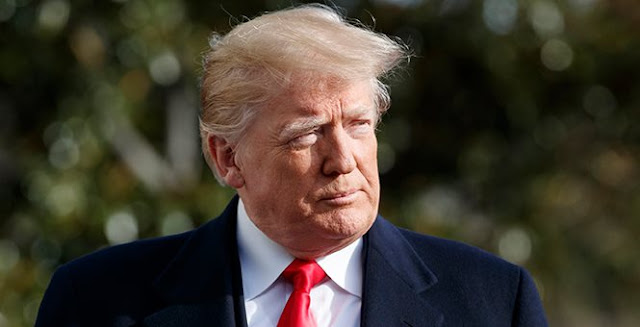 After 25 days of wild speculation by Democrats & their friends in the media, the full Special Counsel’s report has been released and the results are the same as they have always been:

NO COLLUSION, NO OBSTRUCTION.


A brief summary of how the smear against President Trump began:
Starting with the ridiculous DNC-funded dossier, the Obama admin obtained a FISA warrant to spy on the Trump campaign.

THERE WAS NO COLLUSION.

After Trump won the 2016 election, Democrats called for a ridiculous investigation that culminated with Robert Mueller’s Special Counsel.

THERE WAS STILL NO COLLUSION.

At the conclusion of the Special Counsel’s investigation which AG Barr summarized saying there was no collusion and no obstruction, Democrats led by Adam Schiff demanded a the full report be released.

STILL… THERE WAS NO COLLUSION.

Bottom line: Now we know the history of the lies Democrats told the American people as part of their political vendetta against President Trump, Democrats need to be held accountable for recklessly dividing America for their own political gain. 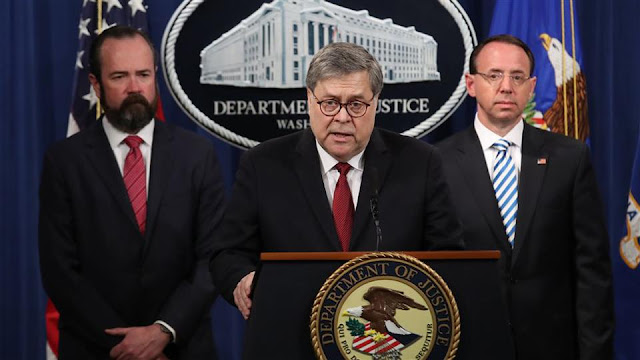 Speaking to reporters at the Justice Department Thursday morning, Attorney General Bill Barr addressed questions about obstruction of justice during the Special Counsel investigation into the 2016 presidential election.

During his remarks, Barr argued that not only was there no obstruction of justice, but that the White House cooperated with every aspect of the probe, offered witnesses and provided requested documentation. During this section, he specifically cited the Mueller report.

"The White House fully cooperated with the Special Counsel’s investigation, providing unfettered access to campaign and White House documents, directing senior aides to testify freely, and asserting no privilege claims.  And at the same time, the President took no act that in fact deprived the Special Counsel of the documents and witnesses necessary to complete his investigation," Barr said. "Apart from whether the acts were obstructive, this evidence of non-corrupt motives weighs heavily against any allegation that the President had a corrupt intent to obstruct the investigation."

Barr also provided context surrounding President Trump's frustration with the probe, which he cooperated with anyway.

"In assessing the President’s actions discussed in the report, it is important to bear in mind the context.  President Trump faced an unprecedented situation.  As he entered into office, and sought to perform his responsibilities as President, federal agents and prosecutors were scrutinizing his conduct before and after taking office, and the conduct of some of his associates," Barr said.

"At the same time, there was relentless speculation in the news media about the President’s personal culpability.  Yet, as he said from the beginning, there was in fact no collusion.  And as the Special Counsel’s report acknowledges, there is substantial evidence to show that the President was frustrated and angered by a sincere belief that the investigation was undermining his presidency, propelled by his political opponents, and fueled by illegal leaks."

When Barr released his four-page letter with the bottom line findings three weeks ago, the White House said President Trump would not assert executive privilege over the contents in the final report. That position still stands.

"Accordingly, the public report I am releasing today contains redactions only for the four categories that I previously outlined, and no material has been redacted based on executive privilege," Barr said. 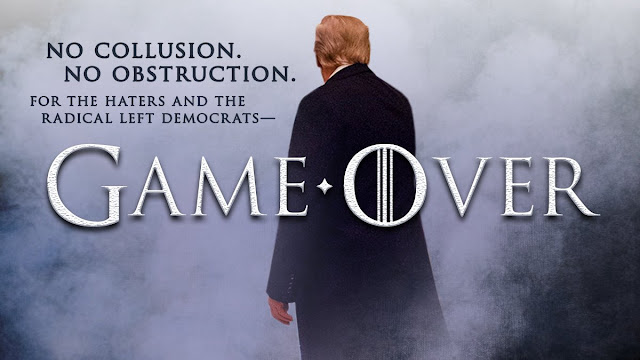 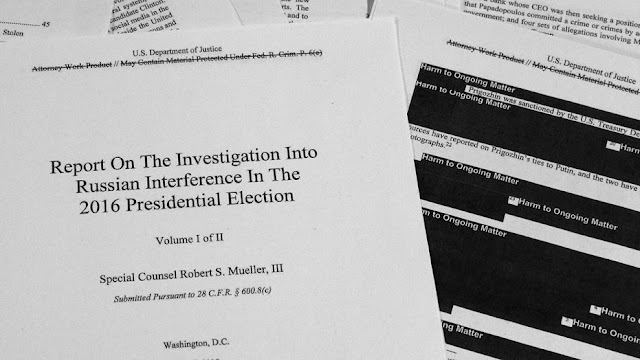 After two years of suspense, Special Counsel Robert Mueller’s report was released into Washington’s partisan scrum Thursday showing investigators did not find evidence of collusion between the 2016 Trump campaign and Russia – as Attorney General Bill Barr declared last month – but revealing an array of controversial actions by the president that were examined as part of the investigation’s obstruction inquiry.

This included President Trump allegedly telling his White House counsel in June 2017 to inform the acting attorney general that Mueller had conflicts of interest and "must be removed." The report said Trump also fumed over the original appointment -- lamenting it would mean the "end of his presidency" -- first telling then-DOJ leader Jeff Sessions he should resign, and later trying to get Session to take back control of the probe.

Mueller ultimately did not reach a conclusion on whether the president's conduct amounted to obstruction, stating: "[W]hile this report does not conclude that the President committed a crime, it also does not exonerate him."

But even though Barr's DOJ determined they did not have evidence to pursue such a case, the details in the report only fueled Democrats' mounting calls to not only see the unredacted report but have Mueller testify.

"This is exactly why we need to hear directly from Special Counsel Mueller and receive the full, unredacted report with the underlying evidence," House Judiciary Committee Chairman Jerry Nadler tweeted, highlighting that section.

Trump and his legal team, though, declared victory upon the release of the report.

"No collusion, no obstruction," Trump said.

The swift reactions indicated the release of the report is only likely to fuel, not quiet, the long-raging debate in Washington over the Russia probe and serve as fodder going into the 2020 election year.

As stated in Barr’s summary last month and reiterated again at a press conference earlier Thursday morning, though, the special counsel did not find clear evidence of collusion between members of the Trump campaign and Russia.

“[T]he investigation did not establish that members of the Trump Campaign conspired or coordinated with the Russian government in its election interference activities,” the report said, while also saying there were "links" between the two.

“While the investigation identified numerous links between individuals with ties to the Russian government and individuals associated with the Trump Campaign, the evidence was not sufficient to support criminal charges. Among other things, the evidence was not sufficient to charge any Campaign official as an unregistered agent of the Russian government or other Russian principal,” the special counsel report stated.

The version of the more than 400-page report that the Justice Department made public Thursday includes redactions, consistent with Barr’s plan to black out portions of the document—including grand jury material, information the intelligence community believes would reveal intelligence sources and methods, any material that could interfere with ongoing prosecutions and information that could implicate the privacy or reputational interests of “peripheral players.”

The redactions in the report were color-coded, labeled with the reasoning behind each redaction, with categories including "grand jury material," "personal privacy," "investigative technique;" and "harm to ongoing matter."

The report, meanwhile, went in depth on the obstruction of justice question, despite the lack of a decision on that front. In Barr's summary to Congress last month, he said he and Deputy Attorney General Rod Rosenstein found the evidence was “not sufficient to establish that the President committed an obstruction-of-justice offense.”

The report itself noted that they obtained evidence about the president’s “actions and intent,” and that presented “difficult issues that would need to be resolved” if they were making a traditional judgment.

The report looked at 10 episodes related to the allegations of obstruction of justice, including:

“The campaign's response to reports about Russian support for Trump; Conduct involving FBI Director Comey and Michael Flynn; The President's reaction to the continuing Russia investigation; The President's termination of Comey; The appointment of a Special Counsel and efforts to remove him;  Efforts to Curtail the Special Counsel's investigation; Efforts to prevent public disclosure of evidence; Further efforts to have the Attorney General take control of the investigation; and Conduct toward Flynn, Manafort, [REDACTED]; conduct involving Michael Cohen.”

The report revealed that the president reacted to the news a special counsel had been appointed by telling his advisers that it was “the end of his presidency,” and demanding that Sessions resign. Once Sessions submitted his resignation, the president did not accept it.

The report also details Trump's alleged effort to have Mueller sidelined, amid reports at the time that special counsel’s office was investigating the president for obstruction of justice. The report details a dramatic moment where the president's White House counsel apparently rejected the push.

“On June 17, 2017, the president called [White House Counsel Don] McGahn at home and directed him to call the Acting Attorney General and say that the Special Counsel had conflicts of interest and must be removed. McGahn did not carry out the direction, however, deciding that he would resign rather than trigger what he regarded as a potential Saturday Night Massacre,” the report stated, referencing the Watergate scandal.

The report also revealed that when the media reported of the president’s request for McGahn to have Mueller removed, the president directed White House officials “to tell McGahn to dispute the story and create a record stating he had not been ordered to have the special counsel removed.”

“McGahn refused to back away from what he remembered happening,” the report said.

The report went on to explain that two days after the initial request to McGahn, the president made another attempt to “affect the course of the Russia investigation.”

“On June 19, 2017, the president met one-on-one in the Oval Office with his former campaign manager Corey Lewandowski, a trusted advisor outside the government, and dictated a message for Lewandowski to deliver to Sessions,” the report said.

“The message said that Sessions should publicly announce that, notwithstanding his recusal from the Russia investigation, the investigation was ‘very unfair’ to the president, the president had done nothing wrong, and Sessions planned to meet with the Special Counsel and ‘let [him] move forward with investigating election meddling for future elections.’”

Lewandowski, according to the report, said he understood what the president wanted Sessions to do.

“Lewandowski did not want to deliver the president’s message personally,” the report said, “so he asked senior White House official Rick Dearborn to deliver it to Sessions.”

Dearborn ultimately did not follow through with the task.

The report also said “substantial evidence indicates that the catalyst” for the decision to fire FBI Director James Comey was his “unwillingness to publicly state that the president was not personally under investigation.” But the report said the evidence “does not establish that the termination of Comey was designed to cover up a conspiracy between the Trump Campaign and Russia.”

The first phase was related to the firing of Comey. “During that time, the President had been repeatedly told he was not personally under investigation.

Soon after the firing of Comey and the appointment of the Special Counsel, however, the President became aware that his own conduct was being investigated in an obstruction-of-justice inquiry,” the report said, adding that “at that point, the president engaged in a second phase of conduct, involving public attacks on the investigation, non-public efforts to control it, and efforts in both public and private to encourage witnesses not to cooperate with the investigation.”

The evidence detailed in the report related to allegations of obstruction of justice, though, is likely to come under intense scrutiny from congressional Democrats and could be used in their sweeping Trump-related investigations.
The president’s legal team, in anticipation of obstruction of justice claims in the report, has prepared their own report to counter the allegations.

“They assumed all along that there was going to be a finding of no collusion, so the rebuttal is about obstruction,” a source close to Trump’s legal team told Fox News. “They are preparing a rebuttal to presumed allegations which will be refuted.”

The special counsel wrote that they sought a voluntary interview with the president, but after more than a year of discussing the prospect of one, the president declined. The president did, though, agree to answer written questions on certain Russia-related topics. But according to the report, he “did not similarly agree to provide written answers to questions on obstruction topics or questions on events during the transition.”

Mueller’s team also said that, while they believed they had the “authority and legal justification” to do so, they decided not to issue a grand jury subpoena to obtain the president’s testimony.