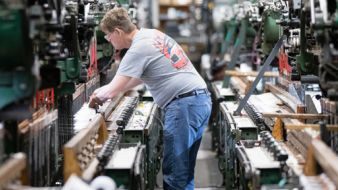 U.S. employers added 196,000 jobs in March, beating Wall Street's expectations for an increase of 180,000, evidence that many businesses still want to hire.

Businesses are confident the economy remains on a firm footing.

The job creation in March marks the 118th month of straight gains.

The Labor Department says the unemployment rate stayed at 3.8%, near the lowest level in almost 50 years.

Average hourly earnings rose by 4 cents to $27.70, following a 10-cent gain in February.

Over the year, average hourly earnings have increased by about 3.2 percent
February's gain of 3.4% was the best in a decade.

A random survey of 2,000 Americans has produced a surprisingly strong track record of forecasting the health of the job market over time.

The report also likely provides the Federal Reserve additional fodor to remain on its dovish track of not raising interest rates for the remainder of 2019.

“With job growth still robust and the yield curve inversion vanished, the Fed should not feel much economic pressure to lower rates,” Robert Frick, a corporate economist at the Navy Federal Credit Union, said

https://www.foxbusiness.com/economy/us-economy-added-196000-jobs-in-march-beating-expectations
Posted by Frances Rice at 10:01 AM