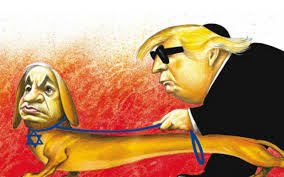 The New York Times has sunk to the level of anti-Semitic Nazi propaganda which served to incite the Germany during the years of the Third Reich.

A political cartoon run by the “venerable” newspaper’s International Edition, which hit the newsstands on April 25, depicted a dog with the head of Israel’s newly-reelected Prime Minister Benjamin Netanyahu leading a blind President Trump wearing a Jewish skullcap. Dangling from the dog’s leash is a Star of David.

More classic anti-Semitic tropes couldn’t have been drawn by Joseph Goebbels himself and his crew of German propagandists, who systematically prepped an entire continent not only to accept, but abet the mass extermination of the Jews of Europe.

This propaganda, which culminated in the Holocaust, served to turn an entire group of people into subhuman vermin, despised by the masses and deserving of extinction. In the Times’ current version, the meaning is clear (and complete with the classic Nazi-era used of the Star of David): Netanyahu (i.e. Israel, i.e. all Jews) calls the shots of the leader of the most powerful nation in the world.

Putting aside all the outrage of publishing such a cartoon, one thing we can say is that the paper has finally shown its true colors. Instead of hiding behind news stories that are deliberately inaccurate and present a skewed depiction of the “facts” when it comes to reporting about Israel, as well as about Orthodox Jews, this cartoon (which certainly went through a number of editors for approval) says it all.

This we can tell by the “apology” run by the paper when called out for running the cartoon. Pulling the item from further publication, the paper admitted the cartoon “included anti-Semitic tropes” and stated, “The image was offensive, and it was an error of judgment to publish it.” View image on Twitter.

Far from an apology, this should be considered, at best, an explanation. Notice in the statement there is no acknowledgement of the fact that publishing the cartoon was morally wrong (not to mention factually wrong, as there is nothing politically to suggest that Israel has any such power over the U.S.).

Rather, the reason The New York Times, by its own admission, pulled the cartoon was because “the image was offensive.”

Yet plenty of political commentary is offensive, especially in today’s “safe space” era. Discourse deemed offensive is usually because it doesn’t conform to the accepted dogma, or it presents facts that are true but inconvenient (i.e., politically incorrect).

More likely, the Times realized post facto that the “offense” caused by the cartoon might be so great as to have long-standing negative financial effects on the paper and was thus deemed not worth it.

For years, particularly since 1992, watchdog organizations have called out The Gary Lady for its systematic and deliberate publishing of misinformation about the Jewish state and its inhabitants. However, this cartoon goes beyond the pale, even in today‘s post-Trump era of self-avowed advocacy journalism by the mainstream media.

(We will forget the irony at the moment of that self-same media which accuses Trump of being anti-Semitic.)

As we have seen from those jumping on the bandwagon to deflect criticism of Representative Ilhan Omar’s blatant and offensive anti-Semitism (“Islamophobia!’ cried Senator Cory Booker and most of the new Democrat party), this type of propaganda serves to create one more step in cementing the normalization of anti-Jewish sentiment among the chattering classes.

The last time that happened, those classes managed to convince the masses. For the Jews, not to mention the entirety of Europe, Russia and America, which all suffered terribly from Hitler and World War II, it didn’t end well.

https://drrichswier.com/2019/04/29/new-york-times-publishes-cartoon-worthy-of-nazi-propaganda/
Posted by Frances Rice at 9:44 AM