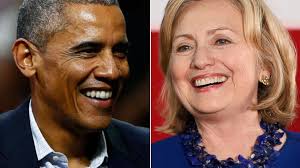 A former top FBI official said a repository of Hillary Clinton's emails was obtained by the Obama White House.

As part of a court-ordered discovery related to Clinton’s unauthorized email server, Bill Priestap was asked by conservative watchdog group Judicial Watch to identify representatives of Clinton, her State Department staff, and government agencies from which “email repositories were obtained" by the FBI.

He divulged a nonexhaustive list, which included the Executive Office of the President.

Priestep answered questions in writing and under oath as part of U.S. District Judge Royce Lamberth's ruling earlier this year that discovery could commence examining the former secretary of state’s use of the server, encompassing Obama administration senior State Department officials, lawyers, and Clinton aides, as well as Priestap.

Judicial Watch shared Priestep's recent testimony on Tuesday, at a time when Republican allies of President Trump, as well as the Justice Department and its inspector general, are looking into possible misconduct by top DOJ and FBI officials stemming back to the Obama administration to undermine Trump as a candidate and president.

“This astonishing confirmation, made under oath by the FBI, shows that the Obama FBI had to go to President Obama’s White House office to find emails that Hillary Clinton tried to destroy or hide from the American people,” Judicial Watch President Tom Fitton said in a statement. “No wonder Hillary Clinton has thus far skated — Barack Obama is implicated in her email scheme.”

Priestap served as former assistant director of the FBI's counterintelligence division and played a significant role in overseeing both the FBI’s investigation into Clinton’s private email server and her handling of classified information. He also was involved in the FBI’s investigation into allegations that President Trump and Trump campaign associates were colluding with the Russian government during the 2016 election.

The FBI confirmed to the Washington Examiner earlier this month that Priestap is retired. "Yes, Mr. Priestap became eligible to retire and chose to do so after 20 years of service," a representative said.

The FBI investigation into Clinton's use of an unauthorized server, hosted in the basement of her home in Chappaqua, N.Y., came to a conclusion during the 2016 presidential election. Former FBI Director James Comey publicly recommended in 2016 that no charges be brought against Clinton, who was then a candidate for president, but admonished Clinton and her colleagues for being "extremely careless" in handling classified information.

One of the main controversies stemming from Clinton's emails was how a technician managing the server deleted 33,000 emails. The FBI was only able to recover about 5,000 of the emails, which were released in tranches up until earlier this year as part of a Judicial Watch lawsuit.

Obama himself said he learned of Clinton's private email server "the same time everybody else learned it through news reports," during an interview with CBS News in 2015.

His press secretary Josh Earnest also acknowledged Obama exchanged emails with Clinton while she was using her private server, but did not know the details of her email address.

“The president, as I think many people expected, did over the course of his first several years in office trade emails with his secretary of state,” Earnest said. “I would not describe the number of emails as large, but they did have the occasion to email each other.”

Clinton has long blamed the FBI's handling of the emails investigation as a reason for her 2016 loss to Trump.