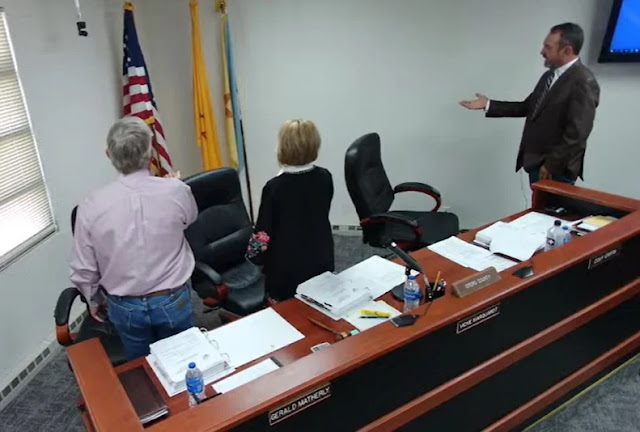 (Above Otero County Commission at the beginning of the day making the pledge of allegiance.)

The Otero County Commission had a long day of discussions and reports today and then they landed upon the issues with the 2020 Election.  They voted to eliminate voting machines in the county!

TGP reported this morning on today’s petition to eliminate using voting machines in the county.

After a day of discussions, the Otero Commission voted on the three following items.

The commission voted to pass all three of the above motions.

These commissioners were fearless.  The more flack they got the more they knew they were over the target.  They wanted every legal vote to count.

“We do all want the same thing.  We all want a fair election”

“If we don’t find out what’s going on, we’ll never know.”

Wow, these commissioners were great.

Here is the actual vote by the commissioners:

Here is the full day’s presentation – this discussion occurred at the end of the day.

Major hat tips to Attorney David Clements and his wife Erin Clements and all those in New Mexico who helped make free and fair elections a thing of the future in this county.

Dinesh D’Souza Dares Jan. 6 Committee to Air His Movie “2000 Mules” at Public Hearing and Try to Refute It 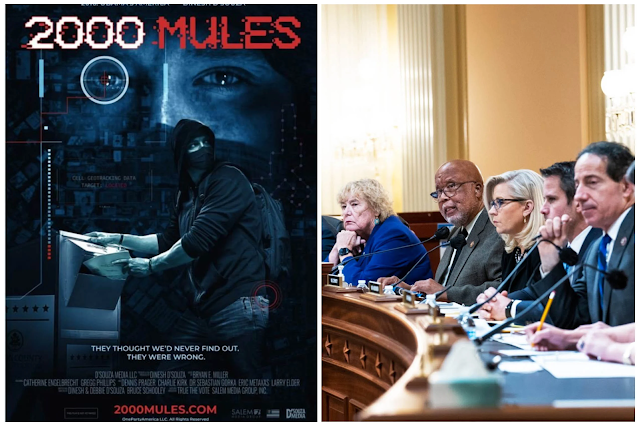 In May Dinesh D’Souza and Salem Media released the much-anticipated movie “2000 Mules” on the 2020 presidential election heist. The movie revealed how thousands of ballot traffickers working in all of the battleground states stuffed hundreds of thousands of ballots into the ballot drop boxes in order to steal the presidential election for Joe Biden.

Catherine Engelbrecht is the founder of True the Vote, an election integrity project launched in 2009.  Gregg Phillips has been in conservative politics for 40 years, working with committees, parties, campaigns, and election intelligence operations. He has built political apps including GROUND, ARC, and IV3. Gregg was also a founder and Managing Partner of the pro-Gingrich SuperPac, Winning Our Future, and election intelligence company, OPSEC Group. Gregg is currently working with Catherine Engelbrecht from True the Vote in their historic investigation of Democrat ballot trafficking in the 2020 election.

Catherine and Gregg told The Gateway Pundit that they discovered that 7% of mail-in ballots were trafficked during the 2020 election.   The investigators told us their evidence will be released following the movie launch next month.

The number of trafficked ballots exceeds the margin of victory for Joe Biden in several battleground states including Arizona, Wisconsin, Michigan and Georgia.  Without these ballots, and not counting the thousands of other stolen ballots in the 2020 election, President Donald Trump would have easily won his reelection.

The mainstream media has either ignored the film or pushed shallow easily debunked arguments on the findings discussed in the documentary.

Too bad the January 6 Committee is not interested in the truth. That’s not their goal.

On Saturday Director Dinesh D’Souza dared Liz Cheney’s January 6 Committee to air “2000 Mules” live during one of their sham hearings and see if they can refute it.

Dinesh D'Souza Dares Jan. 6 Committee to Air His Movie "2000 Mules" at Public Hearing and Try to Refute It (thegatewaypundit.com)