“Clear and present danger” aren’t words any president should use lightly because that’s when the big guns used to come out against the First Amendment — and might again.

Set aside for a few minutes the vaguely Nurembergesque optics of Thursday night’s historically divisive speech by Presidentish Joe Biden so we can concentrate on the content.

“MAGA Republicans have made their choice. They embrace anger,” Biden angrily declared. “They thrive on chaos. They live not in the light of truth but in the shadow lies together.”

“That’s why respected conservatives, like Federal Circuit Court Judge Michael Luttig, has called Trump and the extreme MAGA Republicans, quote, a ‘clear and present danger’ to our democracy.”

Ben Shapiro called it “the most demagogic, outrageous, and divisive speech” he’s ever seen from an American president because Biden “essentially declared all those who oppose him and his agenda enemies of the republic.”

Biden’s speech came just two days after he not-so-implicitly threatened millions of law-abiding Americans with military action. “For those brave right-wing Americans,” he sneered, “if you want to fight against the country, you need an F-15. You need something little more than a gun.”

Ricochet’s Jon Gabriel said that Biden’s word choice was as “deliberate as it was divisive,” reminding readers that the C&PD doctrine was “created by the Woodrow Wilson-era Supreme Court to curtail the free speech of Americans.”

Already, social media giants like Facebook and Twitter have been revealed as willing stooges for government end-runs around the First Amendment, as our own Stacey Lennox noted just today:

On the heels of shocking comments by Meta CEO Mark Zuckerberg about the FBI’s role in censoring the Hunter Biden laptop story, initial e-mails related to a lawsuit filed by Schmitt and Landry show even more evidence that the Biden administration is using Big Tech to do what it is not, allowed to do according to the Constitution.

Lennox wrote that “Further disclosures could demonstrate that Big Tech and the government are conspiring to censor information related to any number of issues.”

But back to Thursday night’s demagoguery.

Well, with whom is Biden at war?

Biden has met the enemy, and he is us.

Many on the Right, including my friend and colleague Stephen Kruiser, believe that Biden’s speech was a display of weakness, “the panic and flop sweat of every Washington power player inside the Beltway.” I don’t necessarily disagree, but let’s at least consider that it might have been something else: A display of dangerously hubristic overconfidence in the administration’s own power.

Their power not to govern but to rule.

What else is there to call it when the Biden regime goes from surreptitiously silencing critics via social media back channels to openly floating a Wilson-era pretext for jailing us?

If this scheming mediocrity believes he can use his signature to transfer up to a trillion dollars from blue-collar Americans into the wallets of lawyers, doctors, and Trans Deconstructive Lit Theory majors and call it “debt relief,” why wouldn’t he think he can use the coercive power of the state to silence his critics?

I’ve been writing for PJ Media for over 15 years, but this is the first time I ever felt like the company, all of these voices, might not be here tomorrow.

I don’t know if the Swamp cabal running the White House will get away with it, but I’m sure as hell not going to be quiet about it — and neither will anyone else on any of the Townhall websites. 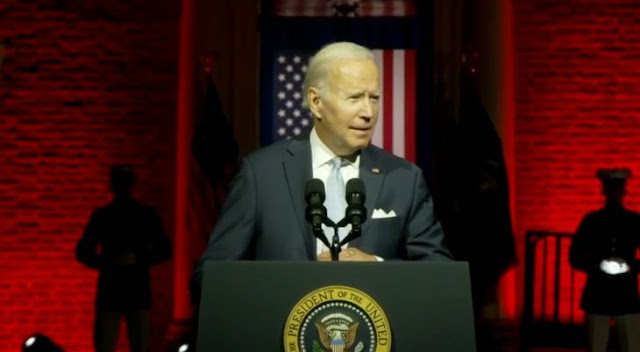 Joe Biden harangued and threatened the nation for 20 minutes on national TV on Thursday in a speech that will be remembered for its vicious rhetoric and blood-red lighting.

In the highly partisan speech, Biden railed against MAGA America like there was no tomorrow—he used the words “MAGA Republicans” 11 times in the first 12 minutes. Some of the most-used words in the speech were: violence, darkness, threat, and politics. The most-used word was “democracy,” the Marxist-leaning crowd’s favorite term of derision for our republic.

But that’s all Joe Biden’s got right now. By nearly every metric, America is worse off than it was during the Trump years, so Biden can only resort to fearmongering and demagoguery.

For most politicians, Independence Hall in Philadelphia would be the perfect backdrop for a patriotic speech. But Biden’s handlers apparently thought it would be better to stage the boss’s dark rhetoric with blood-red lighting and shadowy Marines standing at attention, suggesting a cross between the 6th circle of Hell and a Fidel Castro rally.

There were also echoes in the speech of Emmanuel Goldstein’s Two Minutes Hate in George Orwell’s 1984.

“MAGA Republicans have made their choice. They embrace anger. They thrive on chaos. They live not in the light of truth but in the shadow lies together,” Biden said of the 50% of Americans who did not vote for him.

While he made a passing reference to separating MAGA Republicans from others in the GOP, the rest of the speech suggested that he was indeed talking about anyone who opposes his left-wing agenda.

Judging by the cheers in the audience, I’m guessing that the crowd was largely bused in to cheer for their faltering president. But hecklers could be heard in the distance shouting “F*** Joe Biden.”

Biden concluded the speech with his characteristic confusion:

Paula Bolyard
@pbolyard
That was just weird. Biden ends speech with "God bless you all" and then randomly mumbles, "Democracy." This man is not right.
_______________

Incidentally, none of the Big 3 networks—ABC, NBC, and CBS—carried Biden’s speech live. They’re apparently not down for the cause if it means losing bundles of money.

Tonight’s speech was a dark moment in American history. It shows a man desperate and gasping at straws as he sees his presidency—and the country he claims to love—crumbling around him.

There is a very real possibility that Biden will back up his threatening speech with actions. He may not round us up in ghettos (at least not in his first term) but make no mistake: He just declared war on 74 million of his fellow Americans. If Republicans don’t win big in the midterms, or if Joe Biden gets a second term, there will be no stopping the Left. Our most sacred rights—freedom of speech, freedom of religion, freedom of association, the right to bear arms—could go away—poof—like all that student debt he just “forgave.”

With the 2022 midterms just a few months away, PJ Media will fight tooth and nail to preserve the America we all love—the country that scores of Americans fought and died for. For those of you who are not yet VIP members, we need you now more than ever. For a few dollars a month, you can help us fight Joe Biden, fight the corrupt FBI, and fight the liars in the mainstream media. Join today and use the promo code STANDANDFIGHT for a 25% discount on your membership.