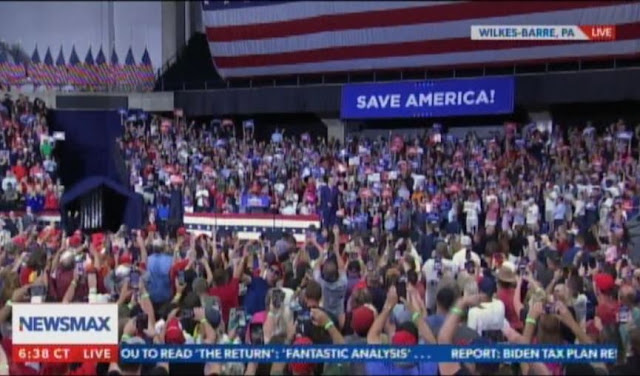 As a veteran of Trump rallies, I can assure you that Trump was ON FIRE Saturday night in Wilkes-Barre, Pennsylvania.

Trump’s first rally since the FBI’s dubious raid on his home in Florida was gangbusters. He entertained a sold-out crowd of 12,000 people indoors and thousands more outside in the rain.

My favorite parts of Trump’s speech were:

For the record, John Fetterman looks like a serial killer. I bet his picture is up in every rest stop across I-80. I saw his creepy mug a million times before I knew who he was and wondered how he even got into politics. Now he wants to represent Pennsylvania in the U.S. Senate. 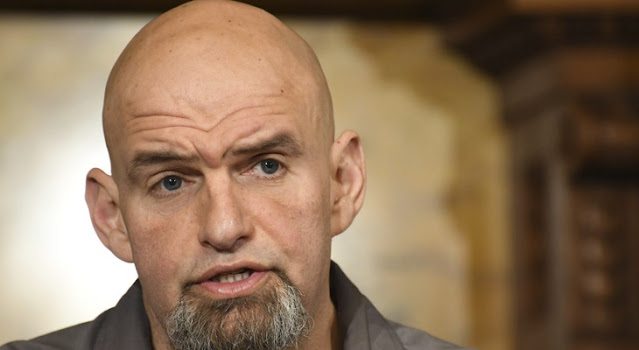 Trump’s first point was to endorse Dr. Oz and Doug Mastriano, the latter of whom who has been an out-loud and proud Trump supporter and leading the fight in Pennsylvania against 2020 election corruption. He is running to be the next governor of Pennsylvania.

Trump then pounced on Biden’s fear-laced, Stalin-like declaration of war on Trump and his 75 million-plus MAGA supporters, reminding his crowd that they are all “enemies of the state” before stating, “He’s [Biden] an enemy of the state, you want to know the truth. The enemy of the state is him and the group that controls him.”

He lambasted Biden’s speech as “hatred and anger” and then joked that Biden woke up the next morning and “forgot what he said.”

Trump then called on Biden to stop vilifying half of America and work on Philly’s brutal murder rate. He also re-defined MAGA for Biden, “because I don’t think he knows what it meant—Make America Great Again.”

Trump attacked those involved in the raid on Mar-a-Lago, saying that the FBI even searched the bedroom of his 16-year-old son, Barron.

Trump hammered the Department of Justice (DOJ) and FBI for allowing Hillary to flush 33,000 emails. The crowd exploded yet again.

FACT-O-RAMA! If I were a borderline dictator who couldn’t draw flies to an outhouse while wearing a poop-suit (like Biden), I’d fear Trump’s power, influence, and message too. But I wouldn’t attack the MAGA crowd, I’d recognize that I am a dinosaur and it’s time for me to jump into a tar pit and pray for a meteor to take out my commie carcass.

Trump suggested the FBI’s recent skullduggery will produce a backlash “the likes of which nobody has ever seen before.”

FACT-O-RAMA! Trump can easily bang out a two-hour speech compared to Biden’s 26 minutes of Philly propaganda, and to a much larger crowd.

Trump’s speech was full of hope and patriotism. Biden’s was a panic-fueled attack on patriots in MAGA hats. Trump spoke of the luxuries we enjoyed under Trump’s presidency and how we can once again (hint, hint) live a life of peace and prosperity. Biden attacked your elderly neighbor for wearing a MAGA cap and declared her an “enemy of the state.”

Trump pushed Dr. Oz over the creepster John Fetterman in the Pennsylvania Senate race. Oz needs the boost because the crime-loving, commie Fetterman seems to be polling well (if you still believe polls) despite having had a stroke and not being able to pull on big-boy pants long enough to debate Oz.

Doug Mastriano is a Pennsylvania patriot. He is MAGA and anti-commie. He is the future of  Pennsylvania and the U.S.A. The crowd erupted every time Trump mentioned his name. He paid homage to Trump while speaking. MAGA is taking over the country. Do NOT be afraid to wear your red MAGA cap.

We can talk for DAYS about whether or not Trump was cheated in the 2020 election, but this much is clear: things HAD to go this way. We HAD to see just how much of the Democrat Party has been infiltrated by commies and globalists. We HAD to learn just how spineless the RINOs genuinely are. We needed four years for king-maker Trump to set the table, the deep table, with patriots in political positions around the country.

Trump began his wrap-up by saying he is being persecuted because the commies want to keep him from running again (hint, hint). He then continued by claiming that “we” (hint, hint) would right the wrongs the Democrats have foisted upon us.

Trump’s powerful rally ended with the song he always closes with, “Hold on, I’m Coming” (hint, hint) by Sam and Dave. If you don’t think Trump is running in 2024 I’d like to sell you my invisible leprechaun “Patty” who will paint your house for free. 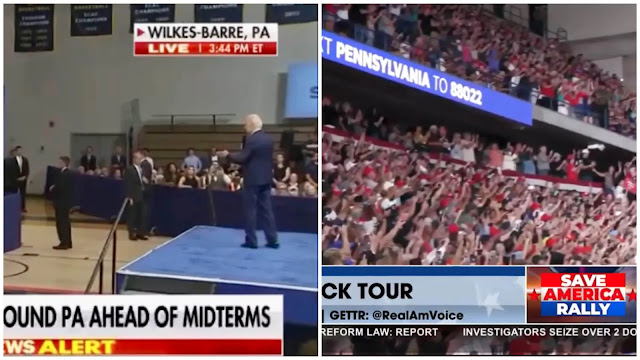 Do you remember when President Trump won Pennsylvania by 795,000 votes in a landslide and then Democrats locked the doors on the counting rooms and manufactured a million votes in five days to steal the state?

On Tuesday Joe Biden held a rally in Wilkes-Barre, Pennsylvania, and talked about gun control in the swing state.

Joe Biden could not even fill a high school gym.

And we are told this dementia patient won Pennsylvania?

What an awful joke. Look at his dismal crowd.

Donald Trump and Joe Biden Both held rallies in Wilkes-Barre Pennsylvania this week.

Here is what they looked like back to back.