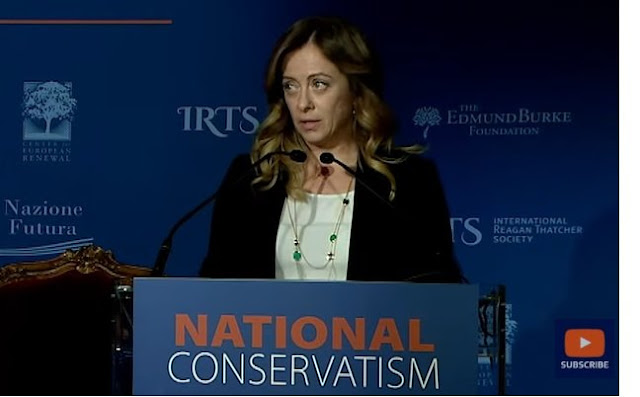 The new leader of Italy is a conservative woman who loves God, her family, and her country.  She shared her thoughts in early 2020 at an event in Rome.

In the 15-minute speech below, Giorgia Meloni shares her remarks at the God, Honor, Country: President Ronald Reagan, Pope John Paul II, and the Freedom of Nations – A National Conservatism Conference in Rome, Italy – February 3, 2020.

Here are some highlights from her speech:

…Our main enemy today is the globalist drift of those who view identity and all its forms to be an evil to overcome.  And constantly ask to shift real power away from the people to supernational entities headed by supposedly enlightened elites.

Let us be clear in our mind, because we did not fight against and defeat communism in order to replace it with a new international regime, but to permit independent nation states once again to defend the freedom, identity and sovereignty of their peoples…

…As a serious alternative to the beaurocratic super state ..and although that someone in Brussels or Frankfort, Davos or the City of London, lacks democratic legitimacy, everyday it commissions the economic choices and political decisions of those who have invested in that legitimacy by their popular vote.

It means that whether the false democrats like it or not, national conservatives in every latitude are actually the only real Democrats. Because it is only by defending the nation states, that we defend the political sovereignty that belongs to the citizens of that state…

Meloni goes on to talk highly of Ronald Reagan and President Trump.  Watch the entire speech which Meloni gives in English by clicking on the below link.