Writer Recalls Queen Elizabeth II’s James Bond Sketch and Her Telling Danny Boyle: “I Think I Should Have a Line” 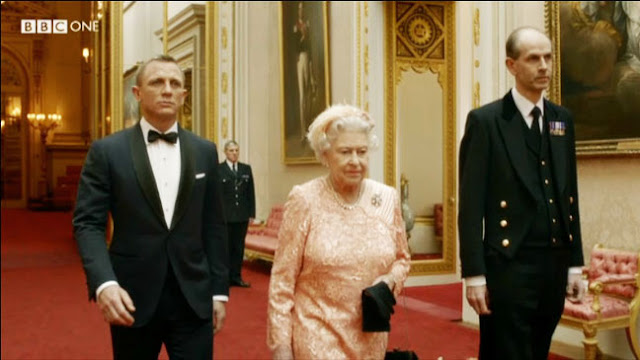 Queen Elizabeth and Daniel Craig as James Bond in a sketch during the opening ceremony of the 2012 Summer Olympic in London.

The queen appeared in sketches alongside both 007 and Paddington Bear over the last decade, with Frank Cottrell-Boyce noting that she gave a "brilliantly timed comic performance."

Daniel Craig reprises his role as British secret agent James Bond as he accompanies Her Majesty The Queen to the opening ceremony of the London 2012 Olympic Games.

Over the last decade, despite her royal duties and advancing years, Queen Elizabeth II — who died Thursday at the age of 96 — starred in two beloved sketches alongside arguably two of the biggest modern-day icons of British entertainment.

In 2012, she stunned much of the world by appearing in a secretly shot scene for the London Olympics opening ceremony with Daniel Craig as James Bond.

“Good evening, Mister Bond,” she says after a tuxedo-wearing Craig enters her study in Buckingham Palace, before the two — and several corgis — walk out to a waiting helicopter, from which she later parachutes into the Olympic Stadium to the 007 music.

While it was — obviously — a double who made the leap, it was the actual queen who appeared before, something the producers weren’t anticipating when they first pitched the idea.

Speaking to the BBC on Friday morning, screenwriter and children’s author Frank Cottrell-Boyce — who was the writer for the Olympic ceremony (which was directed by Danny Boyle) — said that a member of the team had gone to Buckingham Palace to find out what the queen would be wearing on the day of the ceremony and to take photos to build a set.

“The queen’s dresser said, ‘Why are you doing all this?’ And we told her, ‘So we can make it look like the queen.’ So she said: ‘Oh, the queen wants to do it,’” he explained. “She put herself up for that, she wanted to be in the sketch.”

Cottrell-Boyce also noted that it was the queen who insisted she have a speaking part, something they hadn’t previously written.

“On the day we were filming, she said to Danny Boyle, ‘I think I should have a line,’” he recalled. “She bagged that. She didn’t have a line in the script.”

Cottrell-Boyce was also involved in the queen’s most recent sketch, a short video broadcast during her jubilee weekend in June in which she had tea with Paddington Bear.

“She had a lot more lines in the Paddington sketch, partly because it was a lot cheaper to film her than to film Paddington,” he said. “But she did that brilliantly and with evident enjoyment. And it wasn’t easy. Paddington’s not really there, so it’s technically an amazing performance and a brilliantly timed comic performance.” 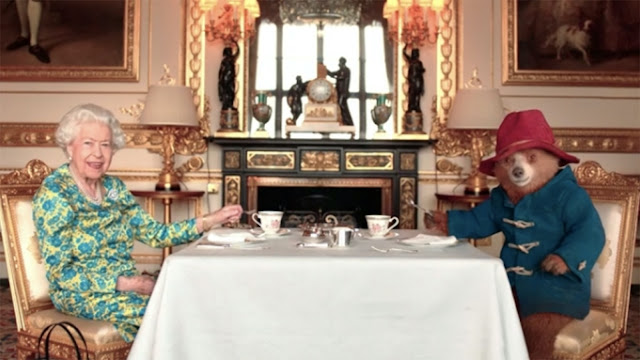 The Queen and Paddington Bear get the Platinum Party at the Palace rocking.

CLICK HERE TO VIEW THE VIDEO OF THE QUEEN AND PADDINGTON BEAR - Ma’amalade sandwich Your Majesty?