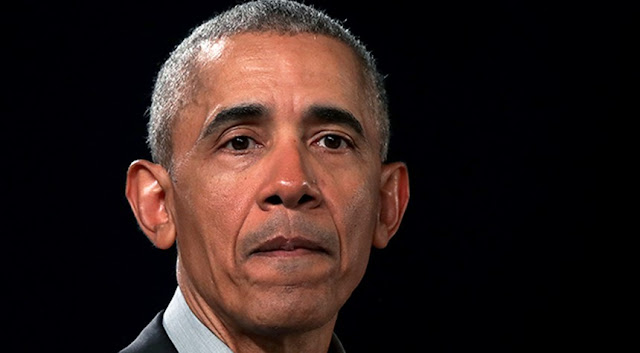 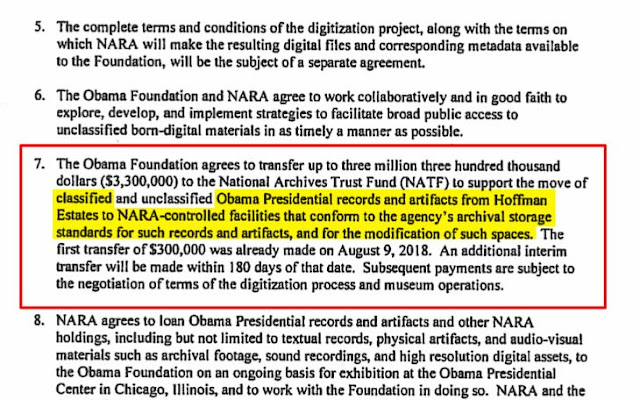 The Obama Foundation agreés to transfer up to three million three hundred thousand dollars ($3,300,000) to the National Archives Trust Fund (NATF) to support the move of classified and unclassified Obama Presidential records and artifacts from Hoffman Estates to NARA-controlled facilities that conform to the agency’s archival storage standards for such records and artifacts, and for the modification of such spaces. The first transfer of $300,000 was already made on August 9, 2018. An additional interim transfer will be made within 180 days of that date. Subsequent payments are subject to the negotiation of terms of the digitization process and museum operations.

Media reports confirm that the Obama Foundation had rented space from Hoffman Estates to store these documents, and extended their original lease for four more years back in August.

“While no firm date has been announced for the completion and opening of the Barack Obama Presidential Library near the University of Chicago, its future contents will stay in Hoffman Estates for four more years,” the Daily Herald reported. “Village board members unanimously approved an extension to the special-use permit that enables landlord Hoffman Estates Medical Development LLC to lease the 74,200-square-foot former Plunkett Furniture store at 2500 W. Golf Road to the National Archives and Records Administration through Dec. 31, 2026.”

While the storage of these documents appears to be with the full knowledge and coordination of NARA, it still raises significant questions, not just concerning the raid of Mar-a-Lago, but also surrounding the legal actions being taken by the Biden administration against Trump over the storage of these documents. Seeing as Mar-a-Lago is Trump’s Florida home, it is protected by Secret Service, making it far more secure than whatever setup they likely had at the former furniture store space. There is no mention of what kind of security measures are in place to protect the Obama documents — if there are any at all.