Gorsuch sworn in as Supreme Court justice ahead of key cases 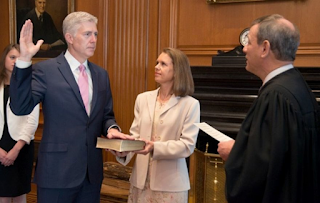 Justice Neil Gorsuch, vowing to be a "faithful servant" to the Constitution, was sworn in Monday to the Supreme Court, capping a grueling confirmation process and filling the seat once held by the late Antonin Scalia.

The latest addition to the court was sworn in at a public ceremony in the Rose Garden. Justice Anthony Kennedy – Gorsuch's former boss – administered the Judicial Oath, the second of two Gorsuch took.

"To the American people, I am humbled by the trust placed in me today," Gorsuch said after taking the oath. "I will never forget to whom much is given to much will be expected, and I promise you that I will do all my powers permit to be a faithful servant of the Constitution and laws of this great nation."

At the ceremony, President Trump called Gorsuch a man of "unmatched qualification" and "deeply devoted" to the Constitution.

"I have no doubt you will rise to the occasion, and the decisions you make will protect our Constitution today and for many generations of Americans to come," he said.

Earlier, Gorsuch took the Constitutional Oath in a private ceremony, administered by Chief Justice John Roberts in the Supreme Court's Justice's Conference Room. He was accompanied by his wife Louise, who held the Bible, and his two daughters.

Gorsuch, 49, takes the seat of the late Justice Scalia, who died in February last year, and whom Gorsuch has been compared favorably to by conservatives hopeful for another originalist on the court.

He underwent a rocky confirmation hearing as he faced stiff opposition from Democrats unhappy with how Republicans had blocked President Barack Obama's nominee -- Judge Merrick Garland -- after Scalia's death.

Gorsuch is likely to cast a deciding vote in a number of high-profile cases, which also explains the tough confirmation process. The high stakes led Republicans to trigger the "nuclear option" last week to kill the 60-vote filibuster threshold for Supreme Court nominees.

Here's a preview of what Justice Gorsuch will be looking at:

Seen as the hot-button case of the Court's sitting, this case involves a Lutheran preschool in Missouri that was denied state funds to improve a playground due to a law banning prohibiting government aid to schools with religious affiliations. Trinity Lutheran and supporters are hoping that, given Gorsuch's rulings on past church-state issues, he will back them in this one.

The first case surrounds a 16-year-old who murdered a 15-year-old in 2003, and his lawyers claim his Sixth Amendment rights were violated and he was given inadequate representation after a court kept his family locked out while a jury was selected and his lawyers did not object.

The Davila case involves a Texas gang member convicted of killing a 5-year-old and her grandmother in a shooting. But lawyers claim he was given ineffective counsel, and specifically they question the legal remedies given to capital defendants.

Justices will hear the case of an ethnic Serb from Bosnia, who was stripped of U.S. citizenship for lying about how she came to the country. The U.S. Court of Appeals for the 6th Circuit ruled that a naturalized citizen can be stripped of citizenship in a criminal proceeding based on immaterial false statements. Gorsuch's record is unclear on immigration issues, and he only ruled on a few in his time on the 10th Circuit.

This case involves the question of whether certain class-action securities lawsuits can be barred because they were filed too late.

The retirement fund in California has sued various financial institutions over their alleged role in the 2008 collapse of Lehman Brothers.

How the justices rule in this case is expected to have serious consequences for institutional investors and also will determine whether putative class members must file individual complaints before the three-year period imposed by Section 13 of the Securities Act has run out.

Fox News' Bill Mears and Andrew O'Reilly and The Associated Press contributed to this report.