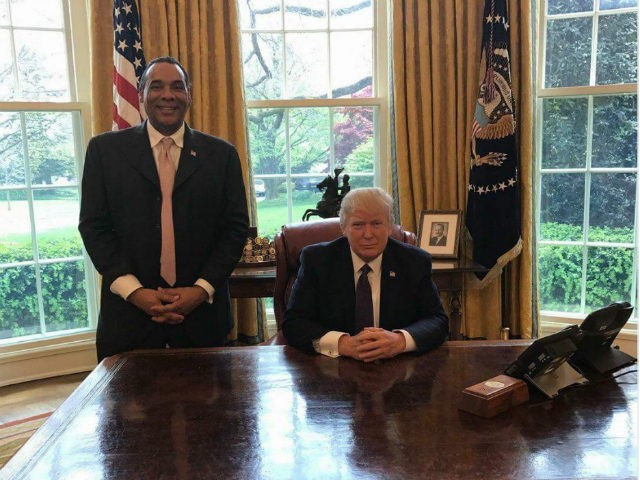 Georgia Republican Bruce LeVell told Breitbart News Wednesday he is running in Tuesday’s Georgia’s sixth congressional district special election to support President Donald Trump’s agenda, not as a conservative or a moderate, but as a Trumplican.


“I believe in the president. He is the leader of our party,” said LeVell, an African-American businessman who was an early supporter of the New York City developer’s campaign and who led the campaign’s National Diversity Coalition.
There are at least 18 candidates, 11 Republicans, five Democrats, and two Independents, in the hunt to replace Health and Human Services Secretary Dr. Tom Price, who held the seat from 2005 until Feb. 10. If no candidate garner’s more than 50 percent of the vote Tuesday, the run-off between the top two vote-getters, regardless of party affiliation, is set for June 20.
When he and his wife looked at the other candidates, he said they did not see anyone who was going to be a champion for Trump, so on their wedding anniversary, Feb. 14, LeVell filed his papers.
LeVell said he met with the president and his chief strategist Stephen K. Bannon earlier on Wednesday at the White House to update them on his campaign.
“Mr. Trump told me I was doing a good job and that I was courageous to jump into this race,” he said.
“I let the president know he will have someone who is with him, who is not going to be a coward,” he said. “With me, it is like a marriage, I am with the president for better or worse.”
LeVell said he thought it was unfair for him to press the president for an endorsement based on their friendship and he wanted to the chance to run as his own man.
“The president told me I was already a winner no matter what happens,” he said. “We took some pictures and he told me that he was happy I was working hard.”
Bannon asked LeVell if he was concerned about the leading Democrat Jon Ossoff, the 30-year-old who raised more than $8 million, he said. “I said: ‘No, we’re good, man.’ It is a 60 percent Republican district. If Ossoff makes it to the run-off, I guarantee he does not win.”
Another friend from the campaign, Corey Lewandowski, Trump’s one-time campaign manager, endorsed LeVell and came down to Georgia to campaign with the businessman.
“Corey and I? It was kind of fun,” he said.
“He called me and said: ‘Hey, man, I am coming down to help you.’ I was like: ‘Really, bro? OK.’ We brought him down and we got about 175 people to an event with him and we raised some money,” he said.
“When Corey made the transition off the campaign trail, I was sad, because one of the things I liked about him was that cheer he had behind the president,” he said. “He was like the Ever Ready Bunny: ‘Come on, Mr. Trump. Come on, Mr. Trump. Let’s go. Let’s go.’ I watched that about him and how he kept a 69-year-old candidate motivated.”
In Congress, LeVell said he wants to be president’s hammer.
“Repeal Obamacare, a trillion-dollar infrastructure in our own roads and transit, a major overhaul of our tax code, especially for someone, who runs a small business like me, shelling out 35 percent in business tax, so we can grow the economy and I can incentivize my employees,” he said.
“Respectfully, terms like conservative or Republican or Democrat? No, those are just great ideas,” LeVell said.
“He is on track for keeping his promises. He still has the pulse. He still has that core movement, chugging along and percolating, and I know that,” he said.
“With the Syrian crisis and the North Koreans, I know a lot of the citizens I talk to are more at ease with a president in the Oval Office, like President Trump,” he said. “They have confidence that somebody is going to stand up for us.”


http://www.breitbart.com/big-government/2017/04/13/exclusive-trump-campaigns-diversity-coalition-director-running-tuesdays-special-house-race/
Posted by Frances Rice at 9:49 AM