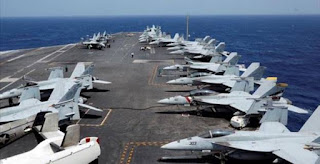 "To kill a chicken to scare monkeys" is a famous Chinese military strategy, and is often attributed to one of the greatest military strategists who ever lived, Sun Tzu, author of the famous treatise, The Art of War.

This particular strategy is designed to send a message (often a warning) to powerful enemies by attacking a smaller, weaker power first.

I don't know if Trump, the author of The Art of The Deal, ever read The Art of War, but his surprising air strike on Syria on April 6th, 2017, clearly achieved a similar effect to this ancient strategy.

Many political pundits worried that the air strike is a prelude to the U.S. deepening its involvement in the war with the Assad regime.

I think they miss the point. If Trump's intention is to go to war with Assad, he could have waited until Chinese president Xi left Mar-a-Lago.  Instead, he chose to strike Assad on the eve of the much hyped summit with Xi. The timing of the strike didn't seem like a coincidence.

While the target of air strike was Syria (the "chicken"), the underline message was intended for China and its client state, North Korea (the "Monkeys").

Trump had every intention to give the Xi a front seat to witness America's military might and his own willingness to take swift and decisive actions alone. Unlike President Obama, Trump made it loud and clear that he's nobody's pushover.

Another curious thing Trump did on the same evening was to leave Xi alone right after state dinner and hold a press conference on the air strike in Syria. Xi and the Chinese delegates most likely view Trump's action as a perceived slight.

High level political events such as this are usually highly scripted and full of protocols.

One of Xi's ultimate personal visions is to return China to its former glory as a super power in the world.  As the world's second largest economy, many in China, probably including Xi, believe that China has already achieved such superpower status and therefore, China should be treated as America's equal with respect.

Trump, on the other hand, by taking care of business in Syria while meeting Xi, probably was sending his Chinese guest a not so subtle hint that the U.S. - China relationship isn't his highest priority.

During his press conference, Trump called on "all civilized nations to join us in seeking to end the slaughter and bloodshed in Syria."

President Xi was curiously silent on the whole matter. He missed a great opportunity to act like a global leader.

If he believes that it's China's rightful place to be a superpower, he has to remember that, as Uncle Ben told Spiderman, "with great power comes great responsibility."

China can't just have all the prestige of being a super power while taking no stands against any rouge regime in the name of non-intervention in other nation's "domestic affairs."