White House Released Photo of Trump, Staff Getting Briefed on Syria Airstrike
While Syria and Russia have unsurprisingly called the U.S.’s retaliation airstrikes on a Syrian airfield an act of aggression, other world leaders have by and large been very supportive of the move.


The United Kingdom is fully supportive:
“[W]e fully support the strike. We have been in close contact with US government over the last couple of days in preparation for this. The Americans believe they have exhausted all possible diplomatic peaceful ways of dealing with the use by the regime of the chemical weapons and they have been determined to try to prevent future attacks like this. So, they have taken this action today, limited and appropriate action against the airfield, airplanes and the equipment that was used, they believe, in this attack and that is action that we fully support," UK Defense Secretary Michael Fallon said Friday.
Prime Minister Theresa May's office also commented on the military action, saying it was "an appropriate response to the barbaric chemical weapons attack launched by the Syrian regime, and is intended to deter further attacks."
Turkey has called for Syrian President Bashar al-Assad’s removal:
"This regime must be removed from leading Syria as soon as possible and the best way to do that is by starting the transitional process," said Turkey’s Foreign Minister Mevlut Cavusoglu.
France prefers to resume peace talks rather than international intervention. French President Francois Hollande is convening an emergency defense meeting to talk about next steps in the country and will relaunch international peace talks.
Germany declared that Assad brought this on himself. "President Assad alone carries responsibility for these developments" with his "repeated use of chemical weapons and his crimes against his own people,” German Chancellor Angela Merkel and French President Francois Hollande said in a joint statement. 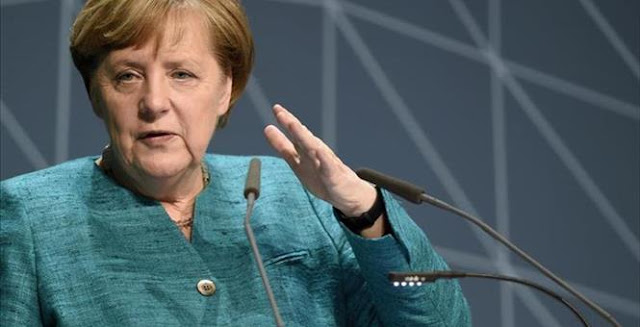 Photo: German Chancellor Angela Merkel
Israel is fully supportive of the airstrikes, calling it an “appropriate response” to the “unthinkable brutality” of the chemical attack.
[Israeli President] Reuven Rivlin said Friday the U.S. "serves as an example to the entire free world" to support steps to end atrocities in Syria.
Israeli Defense Minister Avigdor Lieberman said President Trump sent a message that "war crimes" by Syrian President Bashar Assad will not be tolerated.
Prime Minister Benjamin Netanyahu added that Trump "sent a strong and clear message ... in both word and action" that "the use and spread of chemical weapons will not be tolerated."
Japan’s Prime Minister Shinzo Abe is also supportive of the U.S.’s actions, saying the airstrikes were “a means to prevent further deterioration of the situation.”
Denmark's Prime Minister Lars Loekke Rasmussen tweeted support for the missile strike: "Good that coward assaults on women, men and children has consequences. The United States has clearly indicated that (Syrian President Bashar) Assad's atrocities do not go unpunished."
Australian Prime Minister Malcolm Turnbull said the Australian government supported the U.S.'s “swift and just response.”
"This was a calibrated, proportionate and targeted response. It sends a strong message to the Assad regime, and ... has been struck at the very airfield from which the chemical attack was delivered,” Turnbull said.
Canadian Prime Minister Justin Trudeau praised the U.S.'s  "limited and focused action" against the airfield in Syria and said the Syrian government's use of chemical weapons cannot be ignored. "These gruesome attacks cannot be permitted to continue with impunity," he said in a statement.
Iran joined Russia and Syria in condemning the airstrikes. Iran Foreign Ministry spokesman Bahram Ghasemi said in a statement that the “unilateral action is dangerous, destructive and violates principles of international law.”