Trump Won’t Be Punked By Foreign Dirtbags Like Obama Was 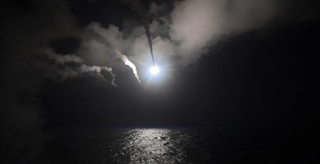 After eight years of Barack Obama's pathetic fecklessness, America has got its feck back.

And the whiny progressives who prefer our woman-enslaving, gay-tossing, toddler-crucifying enemies to the guy who beat their designated heir to the Crown (Royal) are in a tizzy.

Oh no, America is refusing to continue down the path of submission, humiliation, and utter failure blazed by President Faily McWorsethancarter!

Heavens, we can't have our enemies respecting us, much less fearing us!

Gosh, we can't have America re-assuming its rightful place in the world – after all, weren't we taught that the United States is the root of all evil by our pony-tailed TAs at Fussboy U?

In fact, Donald Trump is in the process of doing what Barack Obama never did and what he and his coterie of pompous twits and political hacks masquerading as a foreign policy brain trust could never do. Trump is establishing a successful foreign policy doctrine. It's not precisely old school Republican doctrine. It's also not the activist Bush Doctrine, which is often labeled "neo-con" by people who think "cuck" is a sick burn.

Trump's policy is "America First." Obama's policy was "Blame America First." Obama employed force only after extensive agonizing and never in the amount required to actually win. The Obama Doctrine was about staving off defeat just long enough so the next sucker would get stuck dealing with the resulting mess while The Lightbringer chills doing who knows what sans spouse in the South Pacific as Bill Ayers types up his memoirs for him.

Obama treated our allies like dirt, and he didn't just embolden our enemies. He paid them - literally - with pallet loads of cash. Of course our enemies stopped fearing us. To the extent Putin diddled with our election by exposing the depths of Democrat corruption, it's because he wasn't afraid of that posing, prancing puffboy in the White House.

Putin's rethinking his play now, as are those Seventh Century cultists in Tehran and that bloated bratwurst in Pyongyang. They all saw Obama for what he was – a preachy wuss without the stones for a fight, adhering to the motto "Make Love, not war."

Trump though? "We don't understand what they're going to do in Syria, and not only there," pouted some Putin puppet. Good. When you're acting like the most dangerous guy in the room, everyone else thinks twice about making any sudden moves. Be careful, because Trump might just kick your Harry Reid.

There's been a lot of talk about how Trump is "changing his policies" and "flip-flopping." The mainstream media is desperate for a "Trump Fails!" narrative that might stick, and "Trump Betrays His Supporters By Fighting America's Enemies!" is as good as any.

Baloney. These prissy pundits don't get the essential nature of either Donald Trump or the American people. They confuse Trump's critique of establishment foreign policy – one that resonated with the Americans our fey elite asks to carry the burden of their interventionist shenanigans – with pure isolationism and even pacifism. It is nothing of the sort. Americans are sick of their lives and treasure being squandered by dithering milquetoasts who tie our troops' hands and won't do what's necessary because they can't get it through their pointy heads that if it's important enough to fight a war, then we damn well ought to win it.