This Sept. 26, 1957 file photo, shows members of the 101st Airborne Division taking up positions outside Central High School in Little Rock, Ark. The troopers were on duty to enforce integration at the school. (AP)
Elected Democratic officials in sanctuary cities openly defying federal immigration laws remind me of those Democratic segregationist governors in the south who challenged and disobeyed federal civil rights laws. 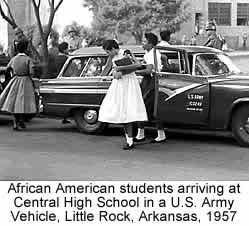 
In a telegram dated Sept. 5, 1957 to Faubus, Eisenhower, noting that Faubus was defying orders of a Federal district court and the U.S. Supreme Court mandating school integration, said, "When I became president, I took an oath to support and defend the Constitution of the United States. The only assurance I can give you is that the federal Constitution will be upheld by me by every legal means at my command."
Six years later, another southern governor, Democrat George Wallace of Alabama, boasted he would personally stand in front of the door of any Alabama schoolhouse that was ordered by the federal courts to admit black students.
When a U.S. district court ordered Wallace to allow the students to register, he refused. 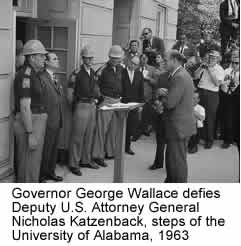 He then stood in front of the University of Alabama campus auditorium flanked by Alabama state troopers to block the entry and registration of the two black students in defiance of federal judicial orders and the law.
In response, Democratic President John F. Kennedy signed a proclamation ordering Wallace to comply and authorized the calling up of the Alabama National Guard.
When Deputy Attorney General Nicholas Katzenbach returned with the students and asked him to step aside — Wallace backed down and the students registered.
In subsequent years in Washington, D.C., I had the pleasure of working with one of the Alabama students — Vivian Malone Jones — and came to know one of the "Little Rock Nine," Ernie Green, who was assistant secretary of labor under President Jimmy Carter.
Wallace in 1963 sounded very much like today’s sanctuary city mayors.
He said, in part. "I stand here today, as governor of this sovereign state, and refuse to willingly submit to illegal usurpation of power by the central government (and) denounce and forbid this illegal and unwarranted action by the central government.''
Substitute the words "mayor" for 'governor," "city" for "state," and, Trump administration for "central government" and we have the current so-called argument for defying immigration laws by liberal Democratic mayors in New York, Chicago, Los Angeles, San Francisco — and other communities.
What a contrast!
While Eisenhower and Kennedy were enforcing federal laws to protect the rights of black students to get an equal education as guaranteed by the U.S. Constitution; today’s liberal, Democratic mayors are violating federal laws to protect illegal immigrants who have committed crimes — serious and often heinous crimes — including gang members.
Why should cities and counties be allowed to have a double standard in law enforcement — one which protects illegal alien felons, and another which enforces criminal laws against legal immigrants and U.S. citizens — black, white and Hispanic — who commit the same crimes?
It's also ironic that in many of our cities such as Chicago, mayors can’t even protect their own American citizens, especially children, from being slaughtered by criminal gangs many of which have illegal immigrant members who have committed heinous crimes such as MS-13.
The MS (Mara Salvatrucha)-13 gang is considered by many to be one of the most violent, organized and dangerous gangs in the U.S. with counterparts in El Salvador, Guatemala, Mexico, and several other South American countries. It is blamed for violent crimes in many parts of the country.
Recently, CNN reported that more than a dozen members of the MS-13 gang were indicted in seven brutal killings on Long Island spanning three years, including the brutal deaths of several high school students last year.
Sanctuary cities provide a perfect haven for illegal MS-13 gang members!
The sanctuary city movement represents a sad decline in basic values and sense of decency when political correctness demands protection for those who have raped, robbed, and murdered American citizens.
Proponents of sanctuary cities apparently won’t be satisfied until we have a George Wallace type confrontation when some publicity seeking mayor, surrounded by local police, attempts to prevent the federal authorities of Immigration, Customs and Enforcement (ICE) from entering a municipal facility.
Many believe that none of this will change until, unfortunately, a loved one of a pro-sanctuary city, county, state or federal official becomes a victim of one of the criminal illegal aliens their policies attempt to protect.
In the tradition of Eisenhower and Kennedy as noted above, affirming the primacy of federal law, let’s hope that the Trump administration follows through on its promise to hold sanctuary cities — and their leaders — accountable.