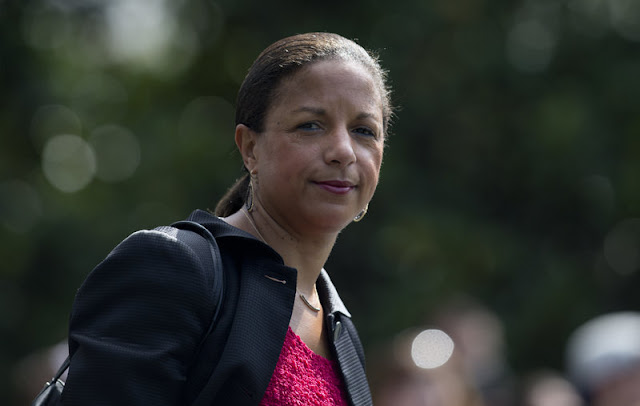 The Susan Rice bombshell at least explains why the Democrats won’t stop babbling about Russia. They need a false flag to justify using national intelligence agencies to snoop on the Trump team.


Every serious person who has tried to locate any evidence that Russia attempted to influence the 2016 election — even Trump-haters at the New York Review of Books and Rolling Stone magazine — has come away empty-handed and angry. We keep getting bald assertions, unadorned with anything resembling a fact.
But for now, let’s just consider the raw plausibility of the story.
The fact-less claim is that (1) the Russians wanted Donald Trump to win; and (2) They thought they could help him win by releasing purloined emails from the Democratic National Committee showing that the Democrats were conspiring against Hillary Clinton’s primary opponent, Bernie Sanders.
First, why on earth would Russia prefer a loose cannon, untested president like Trump to an utterly corrupt politician, who’d already shown she could be bought? The more corrupt you think Russia is, the more Putin ought to love Hillary as president.
The Russians knew Hillary was a joke from her ridiculous “reset” button as secretary of state. They proceeded to acquire 20 percent of America’s uranium production, under Hillary’s careful management — in exchange for a half-million-dollar speaking engagement for her husband and millions of dollars in donations to the Clinton Foundation.
(Politifact rates this claim FALSE! — LIAR, LIAR PANTS ON FIRE! — because Trump referred to 20 percent of America’s “uranium,” not to 20 percent of America’s “uranium capacity.” This is the sort of serious reporting we get from our watchdog media.)
The last thing our enemies want is unpredictability in an American president, and Trump is nothing if not unpredictable. Actually, that’s only the second-to-last thing Putin wants. Russia’s only export is energy: The last thing Putin wants is a president who vows to drill and frack, driving down the world oil price.
But let’s say the Russians were morally offended by a woman who could be bought (by them) for a $500,000 speaking fee, and what they really longed for was a bellicose American president promising to put our interests first.
Why would anyone, least of all trained spies, think that it would help Trump to release emails showing the DNC had its thumb on the scale against Bernie Sanders?
How was that supposed to work again? I forget.
Accepting everything else the most deranged Trump-hater believes, normal people lose the thread of the conspiracy at the moment when the Russians are supposed to have said to themselves, “HEY, I KNOW — LET’S TRY THIS!”
Even experts in American politics haven’t the first idea how to affect an election. The best minds of the GOP bet $140 million of their own money that Jeb! would be the nominee. (Maybe they should have hired Putin.)
Throughout the primaries, Democrats were openly praying that the GOP would nominate Trump. Democrats had the same hope in 1980 for Ronald Reagan. In 2008, Republicans hooted at the idea of Al Franken running for the U.S. Senate.
Days before the election, America’s premier journal of liberal opinion, The New York Times, gave Hillary a 91 percent chance of winning. The Princeton Election Consortium calculated her chances at 99 percent. The Huffington Post’s polling aggregator put Hillary’s odds at 98 percent.
But we’re supposed to believe that a country practiced in spycraft was confident that it not only knew what was likely to happen in a U.S. presidential election, but also knew how to swing it? And no one in Moscow thought to ask: “What will be the predictable, certain outcome of releasing the DNC’s ‘Get Bernie’ emails?”
The DNC leaks might have ended up being the best thing that ever happened to the Democrats. What if they had pulled a Torricelli, and forced Hillary to drop out, so they could run Joe Biden instead? Biden is a lot more popular than Hillary!
Isn’t the more logical leaker someone within the DNC who’d had enough with David Brock and Debbie Wasserman Schultz steering the party into a ditch? The actual leaker probably thought: I’ve got to save the party! She’s going to destroy us!
Wikileaks founder Julian Assange, as well as his associate, former British ambassador Craig Murray, both say that the DNC emails came from a whistleblower within the DNC. Murray has even identified the precise location where a DNC insider passed him the emails — a park near American University.
Assange may be a misguided zealot, but neither his friends nor his enemies call him a liar. His image is very nearly the opposite: a self-righteousness fanatic — not a slippery con man.
Hey, did anyone else notice that last week, very quietly, every single staffer at the DNC was fired?
The claim that Russia hacked the DNC’s emails to help Trump is the sort of crackpot theory that can only be concocted after the fact.
They would prefer to say that North Korea or ISIS “hacked” our election and somehow installed Trump. But unfortunately, Trump has no business dealings with ISIS or the Pyongyang regime. He — or people he knows — have had some vague business dealings with Russia. So the left is stuck with its insane Russia conspiracy.
And now, just as the whole story is collapsing, their need is even more urgent, to distract from the Obama administration’s use of national security intelligence-gathering agencies to spy on domestic enemies like Donald Trump.


http://humanevents.com/2017/04/05/the-russian-emperors-new-clothes/?utm_source=coulterdaily&utm_medium=email&utm_campaign=nl
Posted by Frances Rice at 9:16 AM