It Was Always About the Wall 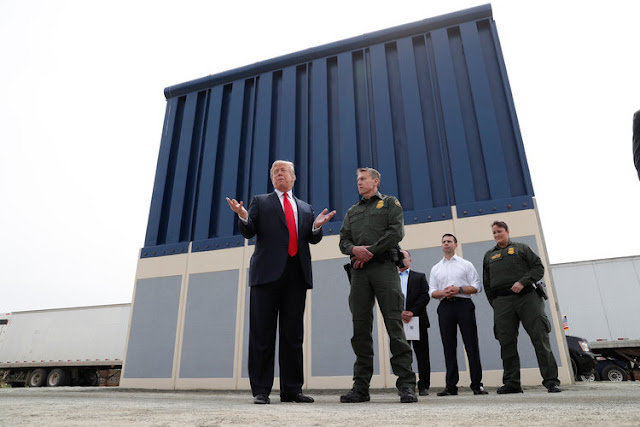 There was likely never going to be "comprehensive immigration reform" or any deal amnestying the DACA recipients in exchange for building the wall.

Democrats in the present political landscape will not consent to a wall. For them, a successful border wall is now considered bad politics in almost every manner imaginable.

Yet 12 years ago, Congress, with broad bipartisan support, passed the Security Fence of Act of 2006. The bill was signed into law by then-President George W. Bush to overwhelming public applause. The stopgap legislation led to some 650 miles of a mostly inexpensive steel fence while still leaving about two-thirds of the 1,950-mile border unfenced.

In those days there were not, as now, nearly 50 million foreign-born immigrants living in the United States, perhaps nearly 15 million of them illegally.

Sheer numbers have radically changed electoral politics. Take California. One out of every four residents in California is foreign-born. Not since 2006 has any California Republican been elected to statewide office.

The solidly blue states of the American Southwest, including Colorado, Nevada and New Mexico, voted red as recently as 2004 for George W. Bush.

Once upon a time, Democrats such as Hillary and Bill Clinton and Barack Obama talked tough about illegal immigration. They even ruled out amnesty while talking up a new border wall.

In those days, progressives saw illegal immigration as illiberal -- or at least not as a winning proposition among union households and the working poor.

So, what happened? Again, numbers.

Hundreds of thousands of undocumented immigrants have flocked into the United States over the last decade. In addition, the Obama administration discouraged the melting-pot assimilationist model of integrating only legal immigrants.

Salad-bowl multiculturalism, growing tribalism and large numbers of unassimilated immigrants added up to politically advantageous demography for Democrats in the long run.

In contrast, a wall would likely reduce illegal immigration dramatically and with it future Democratic constituents. Legal, meritocratic, measured and diverse immigration in its place would likely end up being politically neutral. And without fresh waves of undocumented immigrants from south of the border, identity politics would wane.

A wall also would radically change the optics of illegal immigration. Currently, in unsecured border areas, armed border patrol guards sometimes stand behind barbed wire. Without a wall, they are forced to rely on dogs and tear gas when rushed by would-be border crossers. They are easy targets for stone-throwers on the Mexican side of the border.

A high wall would end that. Border guards would be mostly invisible from the Mexican side of the wall. Barbed wire, dogs and tear gas astride the border -- the ingredients for media sensationalism -- would be unnecessary. Instead, footage of would-be border crossers trying to climb 30-foot walls would emphasize the degree to which some are callously breaking the law.

Such imagery would remind the world that undocumented immigrants are not always noble victims but often selfish young adult males who have little regard for the millions of aspiring immigrants who wait patiently in line and follow the rules to enter the United State lawfully.

More importantly, thousands of undocumented immigrants cross miles of dangerous, unguarded borderlands each year to walk for days in the desert. Often, they fall prey to dangers ranging from cartel gangs to dehydration.

Usually, the United States is somehow blamed for their plight, even though a few years ago the Mexican government issued a comic book with instructions on how citizens could most effectively break U.S. law and cross the border.

All prior efforts to ensure border security -- sanctions against employers, threats to cut off foreign aid to Mexico and Central America, and talk of tamper-proof identity cards -- have failed.

Instead, amnesties, expanded entitlements and hundreds of sanctuary jurisdictions offer incentives for waves of undocumented immigrants.

The reason a secure borer wall has not been -- and may not be -- built is not apprehension that it would not work, but rather real fear that it would work only too well.

Victor Davis Hanson is a classicist and historian at the Hoover Institution, Stanford University. His latest book is The Savior Generals from BloomsburyBooks.