Young California Police Officer, a Legal Immigrant, Was Killed by an Illegal Alien 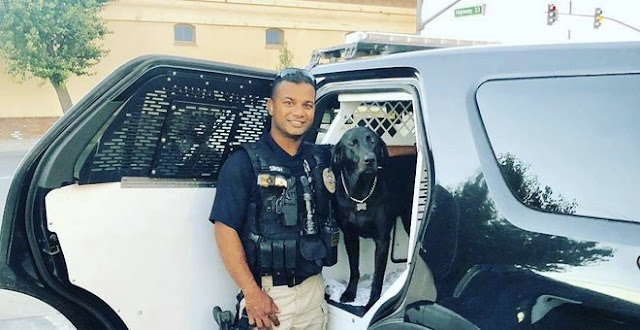 The suspect sought in connection with the murder of a California cop earlier this week is in the U.S. illegally, authorities revealed on Thursday.

The unidentified man alleged to be behind the slaying of Newman police Cpl. Ronil Singh, 33, “is considered armed and dangerous,” Stanislaus County Sheriff Adam Christianson said during a news conference on Thursday afternoon, vowing that the manhunt would “relentlessly continue.” 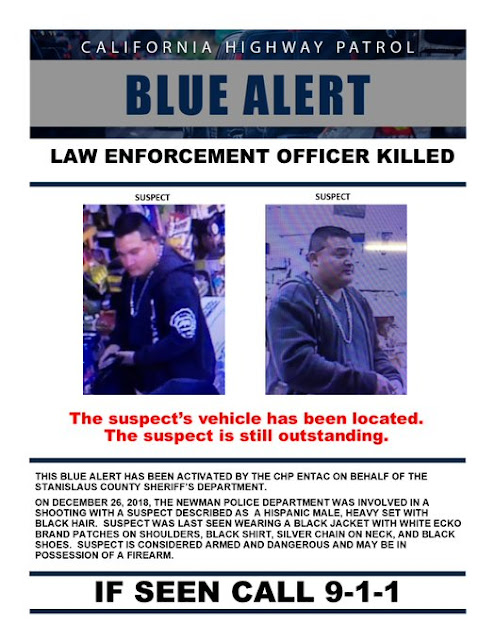 Singh leaves behind a five month old son and a wife. He came to America as a legal immigrant in pursuit of his dream to become a police officer.

"This is not a big department. This is a department of 12. This is a man that i saw everyday he worked. This is a man I relieved on Christmas day so he could go home and spend time with his family and newborn child," Newman Police Chief Randy Richardson said. "He was truly just a human being and an American patriot. Ron was not born in America. Ron was born in Fiji. He came to this country with one purpose and that was to serve this country."

"One of my first hires was Ronil Singh. He had a thick accent, he was hard to understand at time because English was not his first language," he continued. "When I sat with him in the chief's interview, he told me he came to America to become a police officer. That's all he wanted to do." 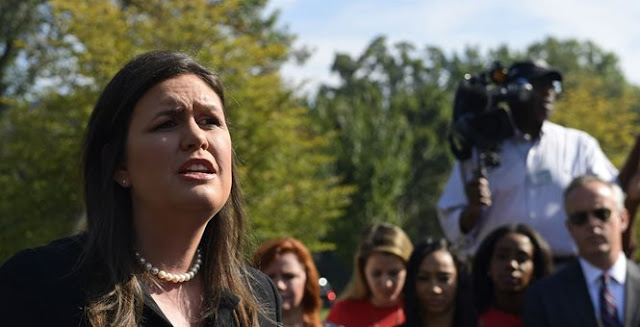 White House Press Secretary Sarah Huckabee Sanders tweeted a condemnation of CNN Thursday after they targeted U.S. troops in Iraq because some of the troops displayed hats and logos supporting President Trump during his visit.

“CNN will attack anyone who supports President Trump, including the brave men and women of our military who fight everyday to protect our freedom,” she tweeted. 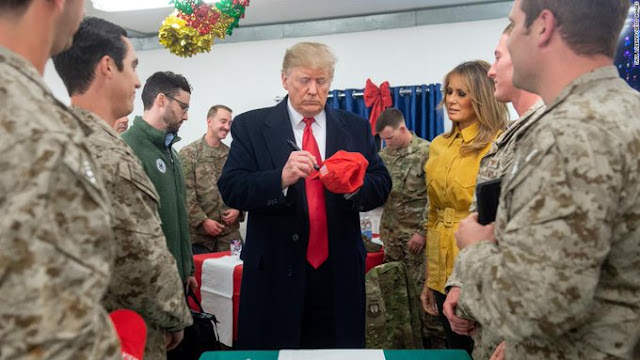 In the article Sanders linked to in her tweet, CNN argued that the troops with Trump “Make America Great Again” hats may have violated Department of Defense guidelines saying that "active duty personnel may not engage in partisan political activities and all military personnel should avoid the inference that their political activities imply or appear to imply DoD sponsorship, approval, or endorsement of a political candidate, campaign, or cause."

“A US military official told CNN the MAGA hats that Trump signed at the Ramstein Air Base event in Germany were personal and brought there by military personnel in hopes of getting an autograph,” CNN noted. “The official contended that it was not a campaign event and that the hats were used as support for Trump, not as a statement of political support.”

Capt. Christopher Bowyer-Meeder, a spokesperson for the US Air Force, Europe, told CNN that no policy violations have been brought forward and that “there is no rule against Airmen bringing personal items to be signed by the president.” 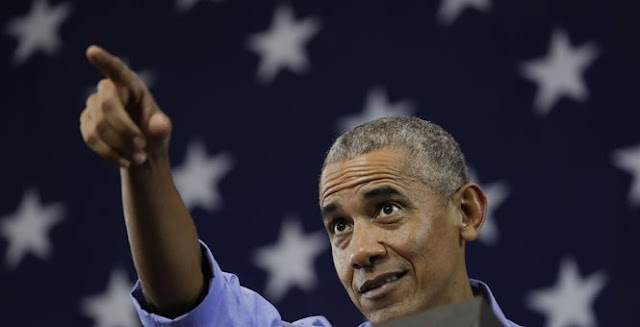 After slamming President Trump for failing to visit U.S. troops during Christmas time earlier this week and then having to completely backtrack when news broke he was in Iraq...visiting active duty troops, the media is still finding ways to criticize. 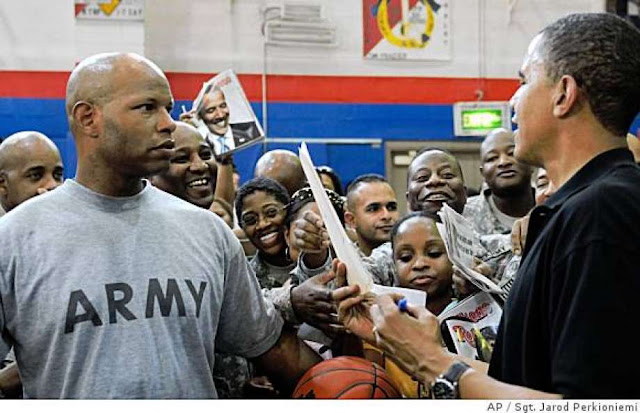 But it turns out President Obama signed personal objects, like his photo, while visiting U.S. troops during his tenure. 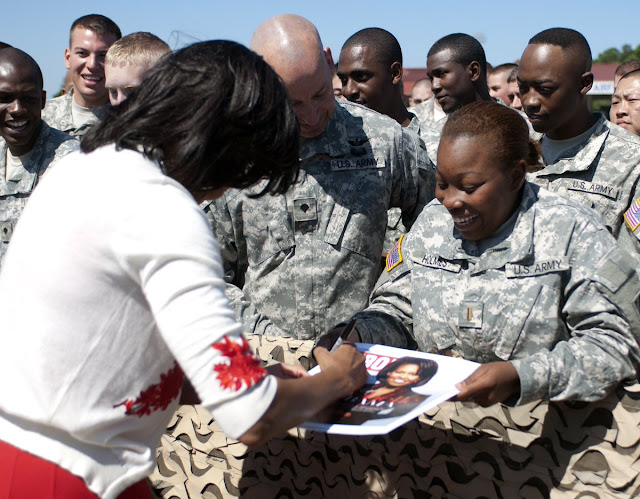 First Lady Michelle Obama also provided her signature to those who asked.

And no, U.S. troops didn't violate any rules by asking President Trump, or Obama, for a signature.

As usual, the outrage only came down on one side.

John Roberts would be more credible rebuking Donald Trump if he did more to rein in the lower courts. 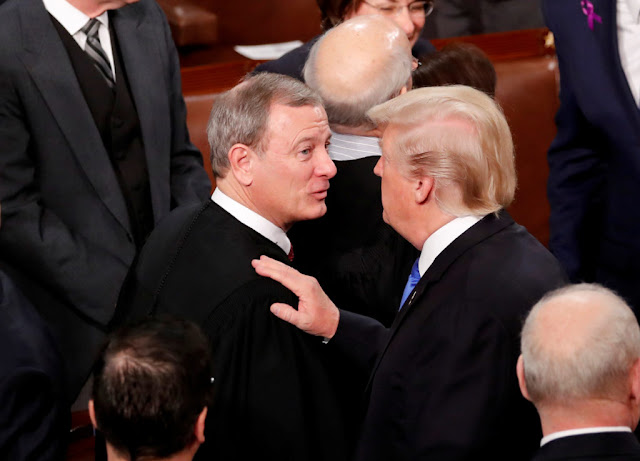 Chief Justice John Roberts was praised far and wide last month when he chastised President Trump for referring to a judge who ruled against his migrant asylum policy as an “Obama judge.” The Chief was right to defend the independence of the judiciary, but he’d stand on firmer ground if he also did more to rein in the growing political excesses of the judiciary.

Time and again in the last two years, lower-court judges have overturned Trump policies on dubious legal grounds. Worse, they have issued injunctions that block the policies nationwide before considering the merits. These injunctions used to be a rarity, but judges know that appeals can take months to get to the Supreme Court and in the meantime the executive branch is stymied. Over time this will make the judiciary look more political, not less.

One example is Mr. Trump’s recent asylum restrictions. The President's immigration enforcement can be blunderbuss and heavy-handed. But the latest rules are calculated to promote order at the southern border amid an unrelenting flow of Central Americans seeking entry. Any President would have to put limits on this unprecedented migrant surge.

The U.S. asylum system was established after World War II to provide refuge for persecuted foreigners, but it needs an overhaul. Immigrants apprehended at the border can dodge immediate deportation by seeking asylum. Claims can take years to process, and in the meantime applicants are released into the nation’s interior.

We support generous immigration, including flexible guest-worker visas that can adapt to a changing labor market. But many migrants seeking asylum in the U.S. aren’t escaping persecution, and the surge in claims is straining government resources while eroding public support for legal immigration.

Enter the Trump Justice Department, which in June directed immigration courts to bar migrants who say they are fleeing domestic or gang violence from receiving asylum. Last month the Justice and Homeland Security departments also limited asylum eligibility to migrants who present themselves at ports of entry, as opposed to entering the U.S. illegally and then seeking asylum.

Nonprofits assisting asylum-seekers have sued under the 1952 Immigration and Nationality Act, which allows any migrant “who arrives in the United States (whether or not at a designated port of arrival)” to apply for asylum. The law also conditions asylum on a “well-founded fear of persecution on account of race, religion, nationality, membership in a particular social group, or political opinion.”

But most migrants fleeing gang violence do not fall into these categories, and the law gives the President authority to “establish additional limitations and conditions, consistent with this section, under which an alien shall be ineligible for asylum.” A President may also temporarily “impose on the entry of aliens any restrictions he may deem” are in the national interest.

In other words, the law balances Congress’s constitutional powers over immigration with the executive’s Article II authority to protect the homeland. The Supreme Court has consistently upheld the President’s authority to limit migration within parameters established by Congress, including a government policy during the 1990s of interdicting Haitians at sea.

Yet liberal judges have been ignoring Supreme Court precedent. Last week federal Judge Emmet Sullivan declared the June asylum restrictions “inconsistent with the intent of Congress” and ordered the Trump Administration to return to the U.S. deported migrants who claimed they had suffered domestic abuse in their home country.

This followed a nationwide injunction by Judge Jon Tigar last month blocking the Administration’s limits on asylum eligibility to ports of entry. That’s when Mr. Trump lambasted the “Obama judge” on Twitter. Mr. Trump played the bully as usual, but he’s right that too many judges are grafting their political preferences onto the law and arrogating to themselves powers that belong to the legislature and executive. Judges are supposed to consider the likelihood of a lawsuit’s success as well as the balance of harms before they enjoin a policy.

No surprise, a Ninth Circuit Court of Appeals panel summarily dismissed the Trump Administration’s policy reasons for asylum restrictions and breezed past nuances in the law. But Judge Edward Leavy skewered the majority’s analysis in a tart dissent.

“The majority concludes that the [Justice Department] Rule conditioning eligibility for asylum is the equivalent to a rule barring application for asylum. But the statute does not say that, nor does the Rule,” he explained, adding that “the government has made a sufficient showing of irreparable harm, and the public has a significant interest in efficient border law administration.”

But these are political considerations, and the Court’s job is to uphold the Constitution, as the Chief explained in his June opinion upholding Mr. Trump’s third travel ban. Like the challenge to the asylum restrictions, the travel-ban case involved an apparent tension in the Immigration and Nationality Act. But the Court eventually found that the President was acting within his authority.

The Chief is said by his admirers to play the long game and wants the Court to take a more modest role in American politics. Sounds good. But failing to stop usurpations by lower courts encourages judges to act like politicians and undermines public confidence in the judiciary’s independence. The Chief has to send a message of discipline and restraint to willful lower-court judges as much as to Mr. Trump.