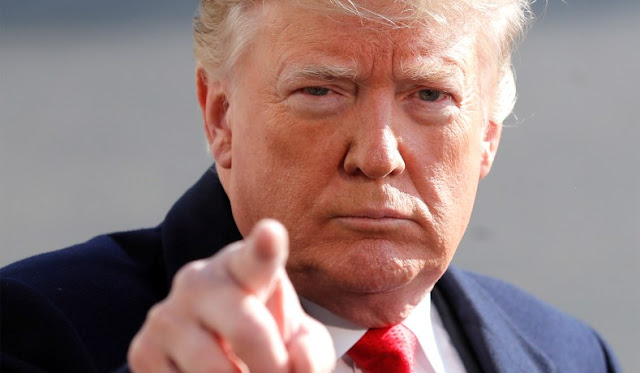 As the year ends, the Trump legal drama winds down towards its tawdry end.

The attacks on him are piffle.

The slab-faced, trim and grim Robert Mueller, closing in like a heat-seeking missile on the start of the third year of the most ineffective and redundant investigation in history, could be a brilliant straight man, desperately serious and purposeful as he silently marches across our television screens every night in reruns of the same old news film in the elaborate pretense that he is doing something useful and important.

It is the same pattern as the Clinton investigation, which began with the financial improprieties of Whitewater and meandered around to checking the president’s semen against a White House intern’s carefully preserved dress.

The lust to tear down a president leads ostensibly serious and responsible people to act contemptibly, and ultimately to become absurd.

Many of the president’s enemies do not, cannot possibly, realize what is happening to them.

It was well known long before he became president of the United States that Donald Trump was, by traditional standards, a somewhat déclassé character.

As an impresario, he had sheared the hair off Vince McMahon, founder of World Wrestling Entertainment, before 90,000 people at the Pontiac Silverdome (but has compensated by making the temporarily glabrous McMahon’s wife the administrator of the Small Business Administration).

His divorces and courtships prior to his relationship with Melania Trump were massively and often rather tastelessly publicized.

His entire public personality intentionally offends half the people, while amusing or pleasing the other half by his irreverence and disdain for the pompous, the indecisive, and the mealy-mouthed categories that enfold the majority of politicians.

He often looks and sounds more like a president than George W. Bush referring to the country of “eye-rack” (Iraq), President Carter sitting in a cardigan beside a roaring fire in the White House fireplace telling the country to turn down its thermostats in the “national malaise” speech, some of the antics of Lyndon Johnson, or even Gerald Ford falling down the steps of Air Force One.

The country knew what it was getting with Donald Trump; the fact that he affronted scores of millions of Americans pleased a numerous enough mass of other Americans to elect him.

His enemies attacked savagely, invented the Russian-collusion nonsense, have been forced off that ledge, and are now scruffing around in the gutter with this bunk about paying off indiscreet female claimants of former intimacy.

It is very hard to make a serious claim that the payments to them were campaign contributions, or that anyone but Trump ultimately paid the money.

It is impossible to take the word of Michael Cohen and the publisher of the National Enquirer, David Pecker, over that of the president to an extent that meets the required threshold of being “beyond a reasonable doubt.”

And no one with the slightest acquaintance with American history or jurisprudence could conclude that whatever Mr. Trump did with or about these women (no coercion of or contemporary payments to the women are alleged), it amounts to the “high crimes and misdemeanors” stipulated by the Constitution for removal from office of a president.

The point is that Trump has actually raised his game appreciably as a president.

His enemies have descended to a nether region of depravity and imbecility that he never, even in the least edifying moments of his astonishing career, came close to excavating:

Not Trump University, not some of the unfortunate properties bearing the Trump name, not Trump’s health plan (what he called “cutting edge health and wellness formulas . . . to achieve the American dream,” but was in fact $1,080 for twelve bottles of vitamins and two urinalyses per year).

It was never more or less than ludicrous hucksterism straining the ambit of the phrase caveat emptor.

In assaulting him, the political elite has abased itself.

Hillary Clinton and Barack Obama and their chief collaborators invented the Russian canard, dispatched the intelligence services and Justice Department, including the FBI, to put meat on the bones of this fraud.

They tried to legitimize the monstrous malicious fabrications and defamations of the Steele dossier, and are now trying to maintain their threadbare credibility by inciting their congressional and media lackies to amplify completely pedestrian tales of sexual dalliances.

Even these facts are contested and unprovable, and in any case unexceptionable, and no one’s business but the Trumps’, and POTUS and FLOTUS have obviously sorted it out between themselves.

There isn’t even a vivid image to play to the prurient howling mobs, such as Bill Clinton being fellated by an intern in the Oval Office while smoking a Freudian cigar and conducting official business on the telephone.

There was nothing illegal about that either, but it wasn’t an image builder in Norman Rockwell’s America.

A clear indication that the Washington political elite has lost its collective mind was furnished on Tuesday when federal district judge Emmet Sullivan implied General Michael Flynn had committed treason by being an undeclared agent of a NATO ally (albeit a wayward ally — Turkey), an offense he apparently committed but which has not been officially charged.

The other headliner was fired FBI director Jim Comey claiming memory loss regarding the events of two years ago 245 times before the House Judiciary Committee.

Comey denied any responsibility for the public-relations problems of the Bureau, disputing that his political biases influenced his performance in office, and telling a New York audience that the future of the country depended on throwing Trump out of office in 2020. J. Edgar Hoover, “the nation turns its lonely eyes to you.”

All of these attacks — on the Trump charities, the Trump inauguration committee, and by the two angry (and greedy) women — is piffle.

The president can’t lose this match politically, and as his opponents have descended beneath him, he has already won morally.

Conrad Black — Conrad Black’s latest book is Donald J. Trump, A President Like No Other. @ConradMBlack