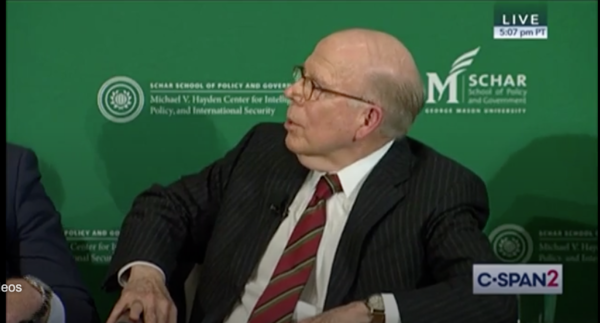 The arrogance and lack of self-awareness among the mandarins that inhabit the top levels of our government bureaucracies has led to a smoking gun-level confession. Rather than respecting the will of the voters who elect a president, they proudly substitute their own policy preferences and think nothing of conspiring to drive from office the person who holds legitimate authority to make policy and conduct the affairs of government.

A confession from a man who formerly ran the CIA came Wednesday at an event sponsored by a friendly organization, the Michael V. Hayden Center and Schar School of Policy and Government at George Mason University. Former CIA Acting Director John McLaughlin was among friends who share the same seditious outlook, speaking on a panel discussion, with CIA Director John Brennan, former FBI Deputy Director Andrew McCabe, and former CIA Deputy Director Michael Morell. With everyone sharing the same assumptions, McLaughlin apparently let down his guard and committed a “Kinsley gaffe” – accidentally telling the incriminating truth.

Chuck Ross of the Daily Caller describes what I call his confession, responding to a question from the moderator:

“There is something unique you have to agree that now the impeachment inquiry is underway, sparked by a complaint from someone within the intelligence community, it feeds the president’s concern, an often used term about a ‘deep state’ being there to take him out,” Margaret Brennan, the moderator for the event, asked McLaughlin.

“Thank God for the ‘deep state,'” replied the former spook, who served as acting director at the CIA in 2004.

Laughter and applause greeted this endorsement of “tak[ing] out” an elected president.

McLaghin kept on digging when the applause died down:

“Everyone here has seen this progression of diplomats and intelligence officers and White House people trooping up to Capitol Hill right now and saying these are doing their duty and responding to a higher call,” said McLaughlin, who has also served as CIA deputy director.

“With all of the people who knew what was going on here, it took an intelligence officer to step forward and say something about it, which was the trigger that then unleashed everything else,” he said.

Consider for a moment the implications of his term “higher call.” Rather than obey the Constitution’s grant of power over the executive branch to the president, a subordinate official claims the right to subvert lawfully ordered policies because he disagrees with them, and to conspire to engineer his ouster from office. In essence, he is claiming that his former agency, the CIA, has the right to make and carry out policy regardless of what the elected officials chosen by voters want. This is not the constitutional republic, but rather a dictatorship of unaccountable bureaucrats.

This is precisely the attitude taken by McLaughlin’s counterparts in the FBI, Comey, McCabe, and Strzok among others. It is sedition.

McLaughlin puts the lie to the claims of many progressive politicians and journalists that the notion of a deep state is a “nutty conspiracy theory.”
Watch and fear for the future of our republic, unless deep state conspirators are prosecuted for their crimes.

https://www.americanthinker.com/blog/2019/11/a_stunning_confession_from_a_deep_state_member_subverting_the_constitutional_republic.html
Posted by Frances Rice at 10:09 AM