What Is He Afraid Of? Adam Schiff Again Refuses to Allow Elise Stefanik to Ask Questions 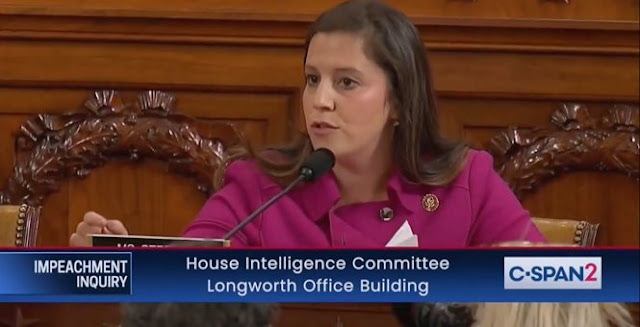 "The gentlewoman will suspend," Schiff asked.

"What is the interruption for this time?" Stefanik asked. "This is the fifth time you've interrupted duly elected members of Congress."

"You're gagging the gentle lady from New York?" Nunes asked. "Mr. Chair, we control the time. It's been customary in this Committee that whoever controls the time can yield to whoever they wish. It seems appropriate that we let Ms. Stefanik ask her question."

As Stefanik pointed out, this is the fifth time Schiff has shut down or interrupted questioning from Republicans on the Committee.

This is the argument being used to justify Schiff's actions. Keep in mind these rules were passed on a party line vote by Democrats.

Eventually, Stefanik was allowed to ask her questions.

Ambassador Marie Yovanovitch laid out some problematic testimony for Joe Biden and co. relating to Burisma. 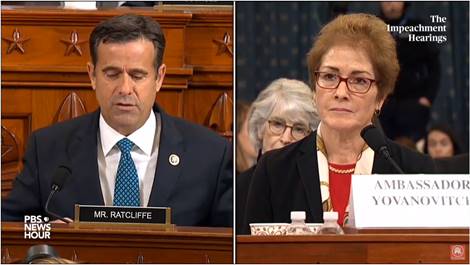 1.       Yovanovitch testified that there were legitimate conflict of interest concerns with Hunter and Joe Biden and Burisma.

2.       Yovanovitch testified that of all the companies in Ukraine, the only company she remembers the Obama State Department preparing her to answer questions about was Burisma.

·         Reuters has reported that Ukrainian executives viewed Hunter as “a ceremonial figure” on Burisma’s board, meant “‘to protect (the company)’ at a time when it was facing investigations.”

·         The Wall Street Journal has reported that a lobbying firm hired by Burisma used Hunter’s name as “leverage” to get a meeting with the Obama State Department, and “mentioned him again during the meeting as part of an effort to improve Burisma’s image in Washington.”

Even MSNBC’s Chris Matthews admitted today that there’s a “serious” appearance of a Biden, Burisma conflict of interest.

Stop The Madness. This weeks’ public testimony has made two things clear:

1) Every Democrat witness before House Intel has not provided ANY evidence of wrongdoing by President Trump.

2) Everyone knew that Burisma was a corrupt company.

Joe and Hunter Biden need to have a full accounting of their actions relating to Burisma, Ukraine, and Joe’s Vice Presidency.

Compiled by the RNC.
Posted by Frances Rice at 6:50 PM