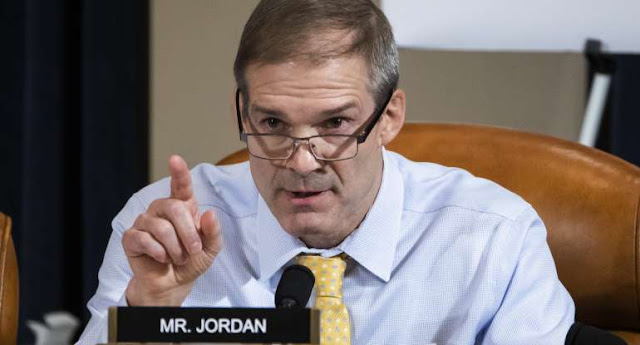 In the first public impeachment hearing on Wednesday, Rep. Jim Jordan (R-Ohio) cleared up misconceptions about why President Donald Trump held up the military assistance funds that Congress had approved for Ukraine. Democrats insist that this delay was part of a corrupt quid pro quo — "bribery," "extortion," and whatever the next term may be — to force Ukraine to investigate Hunter Biden, the son of former vice president and 2020 Democrat Joe Biden, as a political attack on his potential rival.

The Democrat narrative seems disturbingly plausible, but Jordan gave a far better explanation for why Trump held up the money.

"There was a delay on sending hard-earned tax dollars of the American people to Ukraine," Jordan admitted. "We’re not talking any country, we’re talking Ukraine. Ernst & Young said one of the three most corrupt countries on the planet. … So our president said, 'Time out. Time out, let’s check out this new guy. Let’s see if Zelensky’s the real deal. This new guy who got elected in April, whose party took power in July. Let’s see if he’s legitimate.'"

Jordan continued, "Now, keep in mind, in 2018 President Trump had already done more for Ukraine than Obama did. That’s right, President Trump — who doesn’t like foreign aid, who wanted European countries to do more, who knew how corrupt Ukraine was — did more than Obama because he gave them Javelins, tank-busting Javelins to fight the Russians. Our witnesses have said this, others have said this: 'Obama gave them blankets, Trump gave them missiles.' But when it came time to check out this new guy, President Trump said, 'Let’s just see, let’s just see if he’s legit.'"

"So for 55 days, we checked him out. President Zelensky had five interactions with senior U.S. officials in that timeframe. One was, of course, the phone call, the July 25 phone call," the congressman explained. "And there were four other face-to-face meetings with other senior U.S. officials. And guess what, in not one of those interactions — not one — were security assistance dollars linked to investigating Burisma or Biden."

So what happened during those 55 days? "U.S. senators, Ambassador [John] Bolton, Vice President Pence, all became convinced that Zelensky was, in fact, worth the risk. He was, in fact, legit and the real deal and a real change. And guess what? They told the president, 'He’s a reformer, release the money.' And that’s exactly what President Trump did."

Jordan's telling of events squared with the testimony of former U.S. Ambassador to Ukraine William Taylor, who admitted that there was "no linkage" of funding to Biden investigations in any of the three meetings he had with Zelensky during the time in question.

Jordan's version of events also makes sense considering the fact that Trump released the funding without Zelensky opening an investigation into Hunter Biden, Burisma, or alleged anti-Trump Ukraine meddling in the 2016 election. Yet Democrats will continue to push the quid pro quo "extortion" narrative, because it's politically convenient.

"Now over the next few weeks, we’re going to have more witnesses like we've had today that the Democrats will parade in here and they’re all going to say this: 'So and so said such and such to so and so and therefore we’ve got to impeach the president,'" Jordan continued. He summarized testimony from Gordon Sondland to make his point: "Ambassador Taylor recalls that I told Mr. Taylor that Mr. Morrison, who conveyed this message to Mr. Yermak, in conjunction with Mr. Pence’s visit to Warsaw, for his meeting with President Zelensky."

Whatever the Democrats say, the congressman insisted on four key facts that they cannot deny: "The call shows no linkage between dollars and the investigation into Burisma or the Bidens; President Trump and President Zelensky have both said on the call there was no linkage, there was no pressure, there was no pushing; Ukrainians didn’t even know the aid was withheld at the time of the phone call; and most importantly as has been pointed out, Ukrainians didn’t take any specific action relative to investigations to get the money released."

Jordan concluded by lamenting that Democrats will not bring in the whistleblower responsible for the whole impeachment inquiry.

"We will never get the chance to see the whistleblower raise his right hand," he said. "This anonymous so-called whistleblower with no firsthand knowledge, who is biased against the president, who worked with Joe Biden, who is the reason we’re all sitting here today, we’ll never get a chance to question that individual."

This conclusion reminded Americans of what Rep. Devin Nunes (R-Calif.) had exposed earlier. Not only does the Democrats' quid pro quo version of events not match up with the story of Trump's Ukraine policy, but the entire impeachment push began with a hyperpartisan whistleblower who is represented by a lawyer who celebrated a "coup" against President Trump and predicted his impeachment — in the days after his inauguration.

There are many key reasons why not a single Republican joined Democrats in voting to formally open an impeachment inquiry, and why two Democrats joined Republicans in voting against it. Jim Jordan revealed it for what it was, and explained the real reason why Trump held up the money.

Follow Tyler O'Neil, the author of this article, on Twitter at @Tyler2ONeil.
Watch: Devin Nunes Condemns 'Impeachment Sham Drama' in 'Search of a Crime'