The Senate must not legitimize the House’s sham impeachment 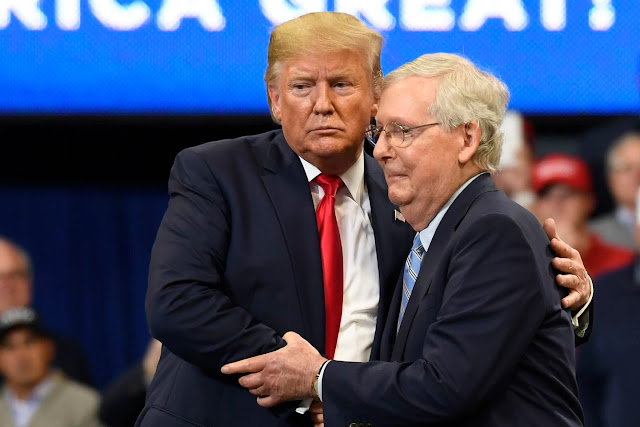 There are three paths before Senate Majority Leader Mitch McConnell (R-Ky.) when it comes to any articles of impeachment the House of Representatives eventually sends the Senate’s way. One is short: a quick dismissal by the Senate of the House charges. One is long: an extensive trial that would let the president and his defenders expose wrongdoing by Democrats and their ”permanent bureaucracy” allies. The third — the only approach that is obviously wrong but that may also be the most likely outcome — would be a far more limited trial that would serve only to reward Democrats for their bad behavior before reaching the foreordained conclusion that the president will not be removed from office.

Those questions greatly benefit from being reframed: What’s in the best interest of the Constitution, the Senate and President Trump? Looked at this way, the arguments for the first or second approaches become clear, along with the risks of the third.

A long, drawn-out deep dive into what the president has long inveighed against as a rigged system would improve the president’s reelection chances. That would include a look at the activities in Ukraine of Hunter Biden and sweep in findings from U.S. Attorney John Durham’s probe into 2016 election-related controversies. Taking no prisoners and insisting on an accused right’s to put on a full defense, Trump, with the consent of McConnell and the GOP majority, could force proceedings that will turn the tables on his partisan accusers and rebut the idiocy, introduced by the Steele dossier, that he is some kind of “Russian asset.”

There’s a lot of appeal to such a deep dive, and I have advocated it myself. But I am also torn about how to proceed, because there is a substantial cost, which is the legitimization of Rep. Adam B. Schiff’s (D-Calif.) process, already irretrievably compromised by alleged ex parte contacts with the “whistleblower,” secret hearings, and circumscribed rights for the minority and the president. The assault on due process, accelerated by leaks and inflamed by deep wells of hatred for the president in much of the media, is too far advanced to correct.

But it could be rebuked, and to do so, McConnell need only take a page from the playbook of . . . Mitch McConnell.

When Supreme Court Justice Antonin Scalia died on Feb. 13, 2016, it took McConnell about an hour to declare that the Senate would not consider a replacement nominee until after the November presidential election. This bold move on behalf of the Constitution will always be McConnell’s crowning achievement as leader: He let the people decide the direction of the court. The vacancy proved to be a key motivator in Trump’s stunning upset.

Americans who supported McConnell can be counted on to back him now if Senate Republicans decide that bogus articles of impeachment do not merit the Senate’s sustained attention. Peremptory dismissal — think of it as a motion for summary judgment — would serve future presidents of both parties even if it would deny Trump the high-profile political theater he delights in and almost invariably has succeeded in dominating since he came down the escalator. I’d love to see a competent defense team unravel Russiagate or Spygate or whatever you call the last three years of guerrilla political war waged by “the Resistance.”

But the price of defining “high crimes and misdemeanors” down is steep. “That which gets rewarded gets repeated” is far more than a cliche, it’s an iron law of politics. If House Democrats succeed — in their own eyes and the eyes of their base — in getting the Senate to infuse their Star Chamber proceedings with respectability, then future House majorities have a road map for their own vendettas (and fundraising machines). If McConnell embraces “the Reid Rule” again — the Senate majority makes the Senate’s rules and can change them whenever it cares to, named for the senator who first used it (to pack the U.S. Court of Appeals for the D.C. Circuit in 2013) — he can guide the Constitution to a safe if not soft landing. Again.

If he does so, McConnell will be assailed by Democrats and their Manhattan-Beltway media elite annex. Again. But the leader will have done the Constitution a great service. Again.

The one path he cannot allow the Senate to follow is to hold a trial in which the House sends over its prosecutors to blather about the president’s telephone call and quid pro quos for a few weeks, after which the Senate, entirely predictably, falls far short of the two-thirds vote needed to convict and remove. That way is all pain and no gain, except for endorsing the precedent of sham show trials. Not at all, Mr. Leader, or all the way please.

Hugh Hewitt, a Post contributing columnist, hosts a nationally syndicated radio show on the Salem Network. The author of 14 books about politics, history and faith, he is also a political analyst for NBC, a professor of law at Chapman University Law School and president of the Nixon Foundation.

https://www.washingtonpost.com/opinions/2019/11/06/senate-must-not-legitimize-houses-sham-impeachment/
Posted by Frances Rice at 11:01 AM