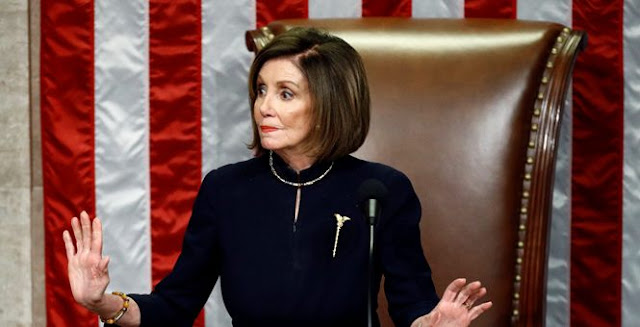 As the economic boom that has defined the first four years of the Trump presidency continues, the likelihood increases that the Left will face four more years in what to them is the nether world of a Trump presidency.  As this realization grows in the minds of the Left, so too does the already virulent anger that has characterized the movement since Noon on January 20, 2017.

It has been obvious to even the most casual observer that Democrats still have not recovered from Hillary Clinton’s loss in 2016.  The Left never has accepted the fact that Trump ran a better campaign than Hillary three years ago, or that his message was more in tune with voters than was that of his opponent.  The arrogance and sanctimony that ever since has characterized the Democrat Party and its adherents, appears certain now to be the rules by which the Left will conduct itself in the months leading to the November election.

In some instances, this worldview has given rise to child-like tantrums; like that of former Georgia gubernatorial candidate Stacey Abrams who steadfastly has refused for more than a year to concede losing to Republican Brian Kemp.  The conspiratorial-based movement she launched in the wake of her November 2018 defeat, has found continuing and fawning support from national Democrat leaders like Joe Biden, and significant financial benefits from benefactors like George Soros.

Before Trump even took his oath of office, Democrats were plotting revenge.  The use of dirty tricks by which Democrats have obstructed the Trump Administration has been unprecedented in both scale and aggressiveness. From using unelected, leftist federal judges to block the White House’s domestic agenda through the use of improper, nationwide injunctions, to the repulsive treatment of Brett Kavanaugh during his Supreme Court confirmation hearings, no trick or ploy is a bridge too far for Democrats when it comes to opposing Trump.

This is why the “impeachment” of Trump fell so flat. Outside partisan Democrat confines, the public saw it for what it really was -- not a serious decision made after a deliberative and constitutionally based process, but fulfillment of a partisan promise made by Democrats the day after Trump was elected.

Impeachment by majority vote of the House was a foregone conclusion; simply another escalation of increasingly bitter behavior directed at the President by people who refused to accept him as the duly elected leader of the nation.

As Trump edges closer to another electoral victory later this year, things are only going to get worse; perhaps much worse.

When the impeachment gambit officially runs its course and fails in the Senate, Democrats will turn to other weapons: more lawsuits in federal and state courts, and abuse of the legislative, oversight and appropriations powers they still possess through majority control of the House. Their goal will be to slow or grind the administration to a halt in whatever way they can, while still attacking Trump and his supporters with subpoenas, inquiries, and threats. It will be a no-holds-barred opposition with a vengeance.

But it is more than the halls of Congress in which the danger of Leftist instability is increasing. Over the last few years, the country has witnessed an escalation of force and intimidation from leftist political groups. One need only look to the violence of ANTIFA, or the recent street-clogging antics of Extinction Rebellion, to see how desperate they truly are. As Republicans continue to find substantive success through the president’s policies and judicial nominations, and as leftist groups fail to gain traction in the public arena, they will become increasingly frustrated, radical, and likely violent.

The hostility seen in disgruntled child activists like Greta Thunberg and the Parkland High School activists, who scowl and seethe whenever offered media opportunities, is the same anger that fuels the entire Left right now. The tools of choice to which they increasingly turn are shouting, media manipulation and violence to wrest power from those who have been elected to the offices they covet.

Perhaps another stunning defeat in 2020 will be the wakeup call the Democrats and their leftist allies need to spark a more reasonable strategy change.  Unfortunately, with recent history as our guide, a far more likely scenario is more excuses, finger-pointing, and conspiracy theories to justify their growing resentment of the democratic processes – a process they used to favor but which they now deride because it provided a win for a president they hate.

Hundreds of Troops Sent to Middle East After Siege of U.S. Embassy in Baghdad 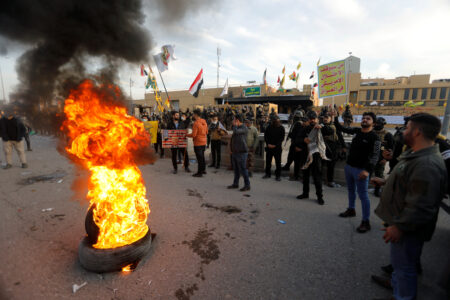 Which started early Tuesday as hundreds of protestors stormed the compound (Fox News).  The attack forced Secretary of State Mike Pompeo to push back his trip to Ukraine (Washington Examiner).  A look at the damage at the embassy (Fox News). 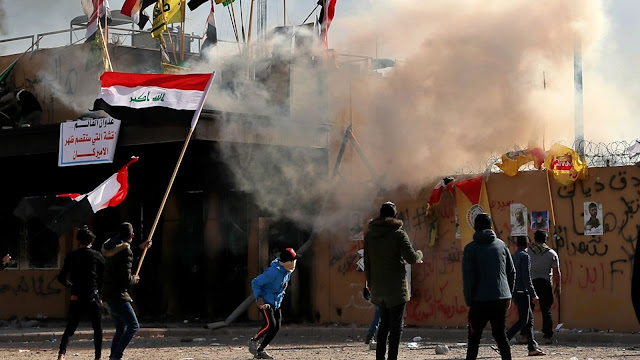 U.S. troops fired tear gas on Wednesday to disperse pro-Iran protesters who were gathered outside the U.S. Embassy compound in Baghdad for a second day as dozens of pro-Iranian militiamen and their supporters had camped out at the gates of the embassy in Baghdad, where they stayed the night. (AP Photo/Khalid Mohammed)

The violent protests, which included smashed windows and sprayed graffiti on the embassy's walls, were said to be in protest of the deadly U.S. airstrikes that targeted an Iran-backed militia over the weekend, killing 25 fighters. In turn, those strikes had been in response to a rocket attack on an Iraqi Army base that killed a U.S. contractor and injured several American troops.

The protests prompted the Pentagon to send hundreds of additional troops to the Middle East.

CLICK HERE TO VIEW THE REST OF THIS ARTICLE

https://www.foxnews.com/world/iraq-us-embassy-troops-protests-tear-gas
Posted by Frances Rice at 9:57 AM