Cipollone: In Their 24 Hours of Arguments, the Dems 'Hid' Evidence From You 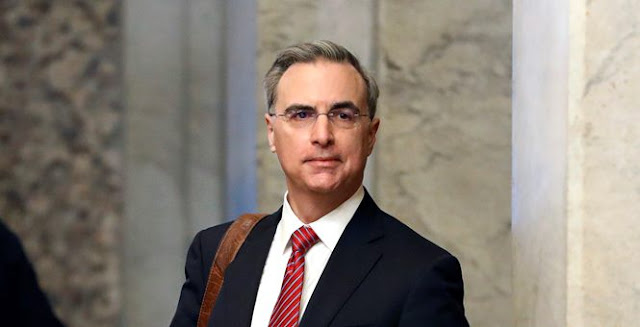 White House lead counsel Pat Cipollone kicked off the defense's arguments in the impeachment trial against President Trump in the Senate on Saturday. He began by informing the senators-turned-jurors of what the Democrats didn't tell them about Trump's July 25 phone call with Ukrainian President Volodymyr Zelensky.

"They didn't tell you that burden sharing was discussed in the call," Cipollone said.

At the outset of Trump's July call with Zelensky, the call that led to Trump's impeachment, Trump told the new Ukrainian leader that Germany "does almost nothing" for them, as well as a host of other European countries. Zelensky said Trump was "absolutely right."

The Democrats apparently "didn't have time in 24 hours to tell you this," Cipollone said.

Trump then turned their conversation to corruption in the 2016 presidential election and there's "nothing wrong" with asking a foreign power to get to the bottom of corruption, Cipollone noted.

The White House counsel concluded that the other side simply "hid evidence" from the senators.

Deputy White House Counsel Michael Purpura drove home that point, switching to the issue of supposed "quid pro quo." Again, in their 24 hours of arguments, the Democrats failed to tell the senators that the Javelin missiles discussed were not part of the paused military aid. To suggest otherwise, he said, is "misleading."

"They're just trying to confuse you," Purpura told the Senate.

Speaking of misleading, Purpura kicked off his part of the argument by presenting the Senate with the infamous clip of lead impeachment manager Adam Schiff embellishing parts of the July 25 transcript.

Finally, Purpura noted how the Democrats relied heavily on EU Ambassador Gordon Sondland's testimony during last month's impeachment hearings, but they failed to put his testimony in "full context." Had they, Purpura noted, they would have noted how Sondland said his belief that Trump tied Ukraine aid to an investigation of the Bidens was based on the ambassador's own "presumptions." It had to be. Sondland had no direct knowledge of the phone call.

"In his public testimony, Ambassador Sondland use variations of the words assume, presume, guess speculate, and believe over 30 times," said Purpura.
The Democratic managers "have the burden of proof" in this trial, Cipollone reminded the Senate. So far, not so good. 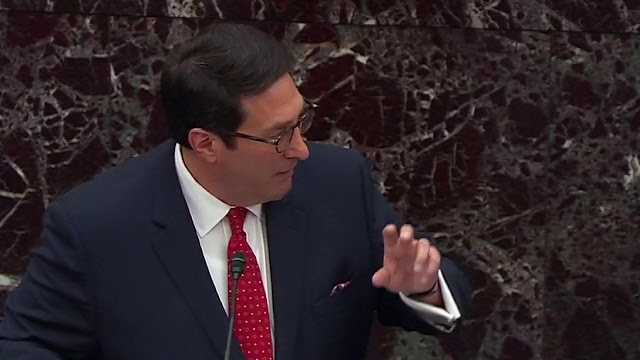 Donald Trump's lawyers defended the president against articles of impeachment Saturday morning arguing it’s the Democrats trying to interfere in elections by seeking to remove Trump from the 2020 ballot for doing “absolutely nothing wrong.”

White House Counsel Pat Cipollone said Democrats have no case and are doing damage to democracy by trying to undermine the will of American voters.

“For all their talk about election interference, they're here to perpetrate the most massive interference in an election in American history,” Cipollone said in his opening remarks to the Senate. “And we can't allow that to happen."

Saturday was the first chance Trump’s lawyers had to refute the House’s case of impeachment and they came out making a forceful case that there are no grounds to remove Trump from office. Not only are Democrats asking the Senate to undo the results of the 2016 election but to tear up all ballots in the 2020 election with Trump’s name, Cipollone charged.

Billed as a teaser for next week's argument, Trump's legal team gave a 2-hour preview of their legal argument. All told, they'll have three days and up to 24 hours to launch their defense - the same amount of time as House managers -- but Cipollone told senators up front they would be "respectful" of their time and make their presentations shorter and less repetitive than Democrats.
…

Trump's legal team sought Saturday sought to dismantle the Democrats’ argument on several fronts. First, Trump couldn't have pressured Ukraine because President Volodymyr Zelensky didn't know it was on hold until after his phone call with Trump, they said.

Trump attorney Jay Sekulow said the president's actions can't be viewed in a "vacuum" and reminded that Trump was "subjected" to the "Crossfire Hurricane" FBI probe before he president and then Special Counsel Robert Mueller's probe after he was in office. Trump had reason to not "blindly trust" the intelligence community and turned instead to his personal attorney Rudy Giuliani on Ukraine matters, he said.

Sekulow noted the administration has placed holds on aid to a number of countries, including Afghanistan, Lebanon, El Salvador, Guatemala, and Honduras. The U.S. withheld $300 million in military aid to Pakistan because it wasn't meeting counter-terrorism obligation, he said.

"You didn't hear about any of that from my Democratic colleagues, the House managers," Sekulow charged.
…

Trump's legal team went on offense by targeting the lead impeachment manager, Rep. Adam Schiff -- first showing the Intelligence Committee chairman reading the essence of Trump's July 25 phone call with Zelensky -- and ripping Schiff's rendition as "a fake." They also showed contradictory videos of Schiff's comments about first wanting to hear from the whistleblower and then changing course over security concerns for the person who blew open the Ukraine case.

"Adam Schiff got kneecapped," Sen. Rick Scott, R-Fla, told Fox News after the opening statements.
…
Instead of winning GOP senators over, Rep. Schiff, D-C.A .and Rep. Jerrold Nadler, ticked off two key GOP swing voters this week with unforced errors on the Senate floor. Both Sens. Susan Collins, R-Maine, and Lisa Murkowski, R-Alaska., said they were upset that Nadler accused Republicans of engaging in a “cover-up” for taking a “treacherous vote” to deny new witnesses.

Nadler's language and Cipollone's lashing back that Nadler should be "embarrassed" prompted Chief Justice John Roberts to admonish both sides.

And Schiff brought up CBS News' reporting Friday night that GOP senators were warned “your head will be on pike” if you vote against Trump.

Republicans groaned at Schiff’s assertion and Collins, visibly agitated, shook her head on the Senate floor and loudly shot back at Schiff: “Not true!” 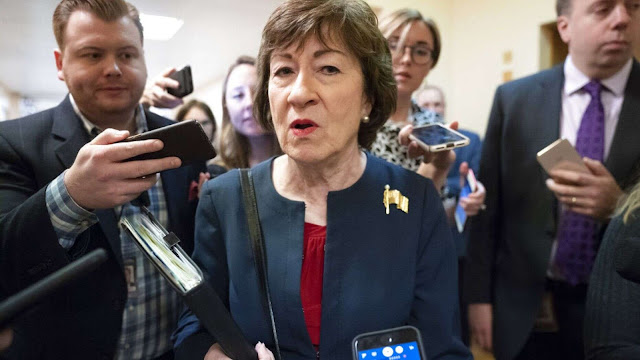 Sen. Susan Collins, R-Maine, is surrounded by reporters as she heads to vote at the Capitol in Washington.  (AP Photo/J. Scott Applewhite)

With little hope of winning a conviction in the GOP-controlled Senate, Democrats have turned their attention to forcing a vote on calling new witnesses and obtaining White House documents, which would take the support of just 51 senators--or four GOP defections.

Another vote on witnesses is expected next week after Trump’s defense team finishes its arguments and senators complete 16 hours of questioning to both sides.